A News Junkie Reflects on the New York Times 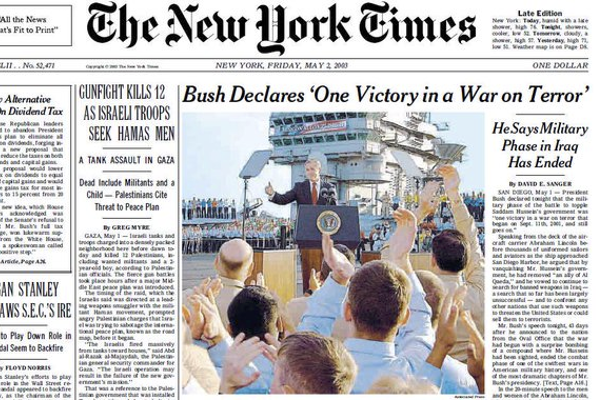 "Nowhere in the elite establishment newspapers could you find regular, sustained, and well-informed criticism of an aggressive and overly militarized American foreign policy."

I've always been a newspaper junkie. Encouraged by Irving, my older brother, who read the dignified Times every day, I read parts of the paper and lots of local ones too.  So when Paul Benov, my high school's  journalism  teacher, told me he had heard  the Times was looking for a HS student to help out with its HS sports reporting I was beyond excited. “Gimme a nickel," I told Irving, and I'll call them." "No you won't," he said, just as excited as I was. "You'll get on the train and go down and volunteer. Now."

Which I did, though the job opening was only a rumor. But a sympathetic Times reporter, seated nearby, told me that other NY dailies had openings and suggested several leads.

Back on the subway with editor's names in hand, I was hired that very day by both the Brooklyn Eagle and NY World-Telegram to cover Saturday's HS football games. And they paid!! ("So much," my Mom said, proudly). I was the Tilden Topics HS sports editor and center on its football team for several years and immediately set out to organize other school sports editors in Brooklyn and Queens. I had them call me once their teams' games had ended, then paid them a portion of what I  received and, with all the high and low lights of the borough's games, I'd call my two papers with details. "Nice job," Jimmy Murphy, the Eagles' gracious and encouraging editor told me. Ah, the Eagle, my favorite paper, which covered my beloved Brooklyn Dodgers with every possible detail.

Still, they weren't the NY Times. Walter Goodman, a family and personal friend, and a veteran Times reporter and columnist, set me straight about the paper years later. When I complimented him on a column he said he'd rewritten virtually the entire piece. But didn't the original  byline author object? "Listen," I remember him telling me, "There are writers who'd gladly kill their grandmothers to get a Times byline. They never care what changes you make."

As an adult, I was hooked and began stringing and freelancing for the Times:  book reviews, travel pieces and op eds. I wrote longer articles about bigoted owners and buyers in Levittown who refused to allow Black WWII vets to buy homes, Vietnam and Iraqi-Afghan vets and their post-war suffering, Agent Orange and the devastating impact on some of their newborns, and insecure Asian immigrants as they tried to acculturate.

When friends asked me who I was writing for I usually  answered, anyone who'd have me, left, right and center, the more varied the better: I co-authored one book with Jim O'Grady (Basic Books) about the Berrigan brothers, priests  who burned 1-A  Vietnam War draft files, and another with Tom Woods Jr. (also with Basic Books), a conservative-libertarian, whose only common ground we had was that he and I were both deeply anti-war. I also wrote regularly for Newsday. When Abba Eban died, the editor asked me for a full and deserving obituary and I complied it since in those years Newsday was the superior of the Times in every way (My youngest son was a reporter for the paper but had nothing to do with my assignments or employment).

And during my military  service I published in foreign language newspapers wherever I could make a contact: a  Japanese editor about American baseball, British editor who loved US politics, and a Yiddish-language daily fascinated with Israeli life (the latter thrilled my Russian-born, Yiddish speaking and reading father.) Another  book I wrote and  meant the most to me was "Our Family," which was inspired by my friend Layle Silbert's moving poem, "Round":

in my head, house of bone

lay my mother and father

in whose head will I lie?

....and who will remember

...my mother and father?

All the same, my lifelong love affair with the NY Times had begun to fade a bit. I joined an external ombudsman, the New York Times Express, where I wrote a column "Keeping Score," about how the Old Man was slipping.

I wrote about its opposition to MLK's radical approaches to  war and poverty, my differences with the paper's view of  Truth-Tellers Snowden and Manning,  why Al Campanis (LA Dodger General Manager and onetime minor league shortstop to Montreal second baseman Jackie Robinson) was unjustly punished and driven out of baseball,  and how quickly we've forgotten the murder and wounding of the Kent State and Jackson State  students not to mention the 58,000  GIs who never made it back home from Vietnam or the 38,000 dead in Iraq and elsewhere while smug opinion-makers in the States ignored the shabby treatment received by  our sickened, even suicidal  combat veterans.

I wrote about the paper's lack of interest in the newly released unclassified documents reporting that the US and its NATO allies lied to Russia even after declassified documents released in December 2017 show without a doubt that Secretary of U.S. State James Baker had declared "not one inch eastward" with an oral assurance given to Gorbachev and overheard by NATO ministers on February 9, 1999 specifically that NATO would never expand eastward toward the Russian borders. I have yet to find a serious, searching  Times article about the documents (still looking), which are housed at the National Security Archive in Washington (http://nsarchive.gwu.edu) but am willing to keep looking. And then there's that unsatisfying connection with corrupt Ukraine, whose anti-Semitic history leaves me cold.  Above all, I was increasingly bothered about the paper's ambivalence toward  powerful interests the distant editorial board didn't like.

And then there was its support for the American invasion of Iraq in 2003, which it hurriedly withdrew with an embarrassing public apology. A band of non-veteran neocons, mainly Israel Firsters and their key backer, Dick Cheney and his pals captured the incompetent Bush Two's White House, whose invasion then set the Greater Middle East afire. The newspaper's uncomfortable but necessary confession, widely reprinted throughout the world, confessed that it had fallen for lies about Iraq's non-existent WMDs.

I'm also bothered because at times the Times seems to fall for insider leaks from the huge and very secret  "Intelligence Community" in our post 9/11 national security state, a development embraced by our some of our most aggressive haters. Add that to the growing hostility to Russia, China and Iran, which  could bring us perilously close to triggering  an accidental conflict.

Who, then, is left to challenge our militarism and imperialism?

So today, while the Times, faults and all, remains the best newspaper we have, there's always a real possibility of a second Cold War instigated by our rigid ideologists and their sightlessness. The late historian's Edward Pessen's "Losing Our Souls or "Why the New Cold War Could Still Be Worse than the Old Cold War” could use some serious discussion in the newspaper of record. Pessen's point is that a second Cold War could kill most of us "in a matter of minutes."

So much for the Land of the Free and the Home of the Brave and the former Worker's Paradise.