Robin Baker is an MA student in public history at Rutgers University-Camden, and the Volunteer Program Coordinator at the Brandywine Battlefield Historic Site in Chadds Ford, PA. 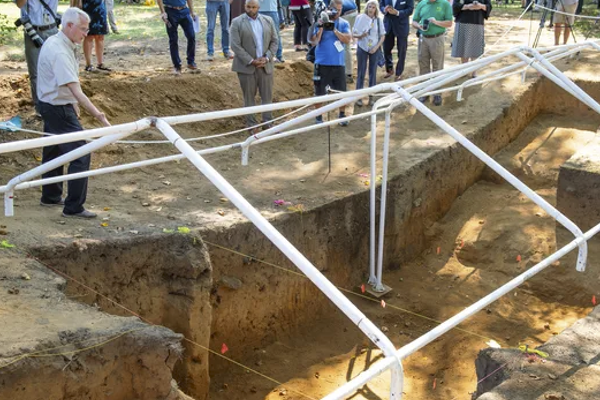 Who would have thought that June 26, 2022, what seemed to be the last day of a new excavation at the Red Bank Battlefield Park in New Jersey, would lead to a significant find and an amendment of the park’s history? Two hundred forty-five years after the Battle of Red Bank at Fort Mercer in New Jersey, site management, additional researchers, and local volunteers encountered a complex, anxiety-producing situation while excavating an addition to the Red Bank Battlefield Park. The Battlefield Director and Public Historian Jennifer Janofsky, and Wade Catts, the principal archeologist from South River Heritage Consulting, thought this would be another day of finding artifacts that could usually be found at a battlefield site. No one could believe that Wayne Wilson, a Gloucester Country Archeology Society of New Jersey volunteer, had found a human femur that likely belonged to one of the Hessians—German troops hired by the British to assist in campaigns against American revolutionaries.

The Red Bank Battlefield Park sits along the bank of the Delaware River in National Park, New Jersey, which was also the site of Fort Mercer in the spring of 1777. It was one of the three forts built to keep British ships and supplies from reaching the British armies that occupied Philadelphia. On October 22, 1777, a decisive battle transpired at Fort Mercer between the Continental Army and British forces. The British and Hessian armies decided to try and take Forts Mercer and Mifflin (on the Pennsylvania side of the river). However, the Americans defended these forts to deny British access and halted the opposing forces for another month.

In 2020, members and managers of the Red Bank Battlefield bought a tract of land adjacent to the park that contained an original, undisturbed trench from 1777. Janofsky received a grant from the New Jersey Historical Commission in the spring of 2021 to enable researchers to excavate the trench, on the park’s northern boundary. According to Wade Catts, this trench is believed to be between the exterior portion of the fort and an interior wall where the American defenders readied their positions during the battle.

Volunteers and archeologists dug this trench for weeks, from April to June 2022. They found a random sack filled with musket balls, grape shot, gun flints, uniform buttons, and a knee buckle. These were common enough for a battlefield site. A week before moving to another digging unit within the trench, archeologists, with volunteers’ help, found an object that stood out from all the others:  a rare 1766 British gold guinea, with the face of King George III. People were excited because eighteenth-century coins were often kept safely on hand, and most were taken if found on someone. The rest of the items were also vital because they would enable researchers and the Red Bank Battlefield Park to tell the stories of people who carried them.

Catts and his associate Dana Linck thought it would be worthwhile to excavate the next unit adjacent to where they found the coin because of its position within the fort.

On June 26, 2022, the last day of the excavation, local volunteers from Gloucester County excavated this section. There, Wayne Wilson, one of the many volunteers, found something completely unexpected—human remains.

After the discovery of the remains, the park notified the Gloucester County Parks and Recreation and the local and state police, which sent Anna Delaney, a forensic anthropologist, to help. The teams of researchers and volunteers approached this section with caution due to the surprising amount of seemingly random arrangements of the remains. Janofsky and Catts described navigating this part of the trench as if they were playing Twister because they had to watch where they stepped.

With the help of Delaney, the site team was able to remove the remains without destroying them any further. Everyone became interested in the initial positions of the remains. Janofsky described this as a mass grave, and Catts called it “Battlefield Gore.” He suggested that the bodies were rolled down the (exterior) wall from above. The site also presented evidence of some purposeful placement of the remains. Leg bones (femurs) were sometimes laid perpendicular to the wall, with dismembered elements, where there were more portions of bones than complete skeletons. This is important because where these men were found was never recorded as a cemetery, because finding the remains between the two walls of the fort goes back to the origins of the battle. Since the Battle of Red Bank was a naval battle between the British and Hessian armies and the American forces, it becomes clearer as to how these men ended up in this trench portion.

Without the help of local volunteers, Janofsky said, the dig would not have run as smoothly, and now the park has a better position and relationship with the community.

Because of this significant find, Janofsky and the Red Bank Battlefield decided not to continue excavating this site but will apply for a new grant for next summer. This would enable the researchers to use ground-penetrating radar, which offers an accurate, non-destructive solution.

The story is not yet complete, but everyone involved looks forward to the chance to reveal more about the Hessians discovered at the Red Bank Battlefield.