Virginia's "Guiding Principles" are a Right-Wing Fantasy of History

Alan Singer is a historian and professor in the Hofstra University Department of Teaching, Learning and Technology. He is the author of New York’s Grand Emancipation Jubilee: Essays on Slavery, Resistance, Abolition, Teaching, and Historical Memory (SUNY Press, 2018). His email address is catajs@hofstra.edu. 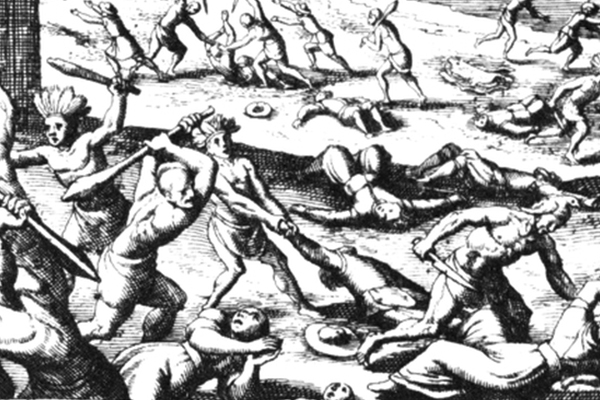 Artist's depiction of March 22, 1622 attack by Powhatans against Jamestown colonists.

According to state law, Virginia’s learning standards are supposed to be reviewed by the state Board of Education at least once every seven years. During 2022, a team including teachers, parents, students, museums, historians, professors, political scientists, economists, and geographers met for months and developed a 402-page draft version for history and social studies. Before it could even be reviewed, the state’s Board of Education, dominated by appointees of Republican Governor Glenn Youngkin, rejected the draft. Last week they replaced it with their own 52-page statement of “Guiding Principles” without the curriculum frameworks, list of instructional resources, and student activities in the original draft. The new rightwing sanitized standards, quickly developed with input from conservative Christian Hillsdale College and the equally conservative Thomas B. Fordham Institute, will now undergo a months-long public review process.

According to the Youngkin BOE, “Virginia’s History and Social Science standards aim to restore excellence, curiosity and excitement around teaching and learning history. The teaching of history should illuminate insights from the past and inspire current and future generations to lead lives that are informed and inspired by those who walked this journey before them.”

Critics charge that rather than illuminate, these “Guiding Principles” indoctrinate. Youngkin has made clear that under his administration, teachers would not teach and students would not learn about what he considered “inherently divisive concepts.” In line with this, the “Guiding Principles” demand that teachers present students with “facts” in “ways that do not ascribe guilt to any population in the classroom.” It insists that teachers present “all of our history in an objective, fair, empathetic, nonjudgmental” and specifically orders teachers not to color lessons with their own “personal or political bias.” The “Guiding Principles” then lay out the political biases Youngkin and his appointees want to indoctrinate students with.

Meanwhile, conservative groups have rallied in support of the Virginia guidelines, praising them for disproving “the lie spread by Critical Race Theory supporters.” According to the Independent Women’s Forum, an anti-feminist, rightwing group financed by the Koch brothers and the Scaife and Bradley Foundations, “The message here is that historical evils are not unique to America. The bigger message, though, is about American greatness. The guidelines include “inspirational moments[,] including … the American Revolution, the triumph of America’s Greatest Generation in World War II, the Marshall Plan, the civil rights movement,” and more. The group also praised the fact that Virginia’s guidelines explicitly invite “informed engagement by parents” who will receive “open access to all instructional materials utilized in any Virginia public school” and require that a teacher remain an “apolitical and unbiased moderator between students.”

The Washington Post conducted an independent review of changes to Virginia’s history and social studies education proposed in the Youngkin standards and concluded that rightwing bias pervades the entire proposed “Guiding Principles.” What follows draws from the Washington Post analysis.

The existing social studies guidelines for kindergarten call for lessons teaching that “Indigenous People were the first inhabitants of the land that we now call Virginia and the United States” and that “multiple tribes have always and continue to live in Virginia and the United States today.” The Youngkin guidelines do not mention Indigenous peoples and delete a suggestion that kindergartners be taught “respect for diversity” and learn how to work collaboratively with “people of diverse backgrounds, viewpoints and experiences.”

In third grade, students have been learning about ancient societies in Egypt, Greece, Rome, China and Mali. The Youngkin guidelines drop China and Mali. The fourth grade guidelines currently recommend that students learn about the history of “the Algonquin, the Siouan and the Iroquoian” as well as “the lives of Indigenous People ... living in Virginia today.” In the Youngkin guidelines Indigenous people no longer exist in the current era.

Existing fifth and sixth grade guidelines state that an overarching theme for U.S. history should be “racism,” defined as “prejudice, discrimination, or antagonism directed against someone of a different race based on the belief that racial differences produce an inherent superiority of a particular race.” The new guidelines do not mention teaching students about racism. In addition, the Youngkin recommendations drop references to the United States as an “imperialist world power” and the Women’s Rights Movement and an examination of America’s response to the European Holocaust.

The 8th grade guidelines currently include a section on “Resources and the Environment” with lessons “examining the sustainable use and management of resources” as well as instruction on how human growth, development and technology has “driven changes in energy resource management.” This is watered down so that students only learn “how humans influence the environment and are influenced by it.”

In high school, students were expected to dissect, compare and contrast the concepts of “colonialism,” “imperialism,” “nationalism” and “racism.” This will all be dropped if the Youngkin standards are approved. According to the old guidelines, slavery was the root cause of the Civil War. The Youngkin guidelines list slavery as one of the “cultural, economic, and political issues that divided the nation.”

In the Youngkin guidelines, students are told that the United States has “led the world in political, social and economic thought and action” and that America’s founders invented the ideas incorporated in the Declaration of Independence; they were not borrowed from British Enlightenment thinkers like John Locke.

Student understanding of the United States Constitution shifts to the right. Previously the writers of the Constitution “built a system designed to evolve over time.” Students will now be taught that the Constitution is “the nation’s fundamental and enduring law.” Economic planning is now denounced as “socialism or communist” and students are told it is “incompatible with democracy and individual freedoms.”

Students learn “optimism, ideals and imagery” were best presented by former President Ronald Reagan in his speech describing the United States as a “shining city upon a hill,” a phrase his speechwriters borrowed from 17th century Puritan sermons. Abraham Lincoln’s Gettysburg Address, John F. Kennedy’s Inaugural Address, and Martin Luther King Jr.’s 1963 “I have a dream” speech at the Lincoln Memorial aren’t mentioned.

Virginia students, if the Youngkin guidelines are approved, will learn about “our nation’s exceptional strengths, including individual innovation, moral character, ingenuity and adventure” and “study inspirational moments that have “made America the world’s exemplar of freedom, opportunity and democratic ideals.” All of this will be done, supposedly, without promoting ideology, avoiding indoctrination, and ensuring that students develop critical thinking skills.