Is Gerontocracy the Problem? 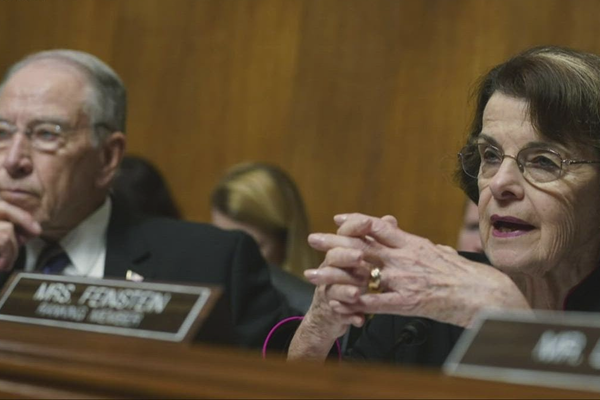 U.S. Senators Charles Grassley (R-IA, 89) and Dianne Feinstein (D-CA, 89) were the ranking members of the Senate Judiciary Committee in the most recent Congress.

The political punditry has made an amazing discovery—Joe Biden is old. On November 20, 2022, he will turn eighty years old, the oldest president in American history.

With the midterms in the rearview mirror, the talk on your screen (whether on video or reading words) is speculation over whether or not he should run again. Recently I saw Rich Lowry, editor of the conservative National Review, bring up Biden’s age on television. The host mentioned Trump is only four years younger. Lowry, no Trump acolyte, deftly shifted to the next talking point.

My point is that many of the members of two branches of the United States Government are old. The oddity is that the Supreme Court, often filled with septuagenarians and octogenarians is fairly young right now compared to its past.

Speaker of the House Nancy Pelosi: 82

These are the people who would likely be skirted away first in the event of a “Continuity of Government” situation. Perhaps a few cases of Ensure or the like should be in the underground bunkers.

The people of Iowa just reelected Chuck Grassley to his eighth term at the age of eighty-nine. FDR was president (just six months in) when he was born in 1933. California Senator Dianne Feinstein is three months older, and her term has two years remaining. In the outgoing senate, a third of the members are over the age of seventy, and the average age was sixty-three. Almost twenty percent of the house is over age seventy, or close. The average age there is fifty-eight.

When the Founding Fathers met in the summer of 1787, they decided the minimum age to be president was 35, senator 30, member of the house 25. Interestingly, Maxwell Frost, 25, was just elected to represent Florida’s tenth congressional district. Ironically, when Joe Biden was elected to the Senate in 1972, he was 29 on election day, but turned 30 before he was sworn in. Those men placed minimum ages for offices, yet no maximums, even while eighty-one year old Benjamin Franklin may have been napping during the debate.

In 1896, William Jennings Bryan was the youngest candidate for president at just thirty-six. Five years later, Theodore Roosevelt became the youngest president at forty-two when William McKinley was assassinated. John F. Kennedy, became the youngest elected president in 1960 at the age of forty-three. I seem to recall “Jeopardy” had a semantic scuffle over that question a few years ago. Florida Governor Ron DeSantis, often mentioned as a candidate in two years, is only forty-four. If he were to run and win, he would be the second-youngest person elected to the presidency.

Donald Trump has announced he is running again in 2024, and Biden may as well. On November 5, 2024, Election Day, the former president will be seventy-eight, and the incumbent will be almost eighty-two. At the end of that term, advance those numbers to eighty-two and eighty-six. A quarter of Americans want neither to run next time, and if asked about either individually, that number is over fifty percent for both. Curiously, two younger public servants whose names are often bandied about—Secretary of Transportation (and 2020 candidate) Pete Buttigieg and New York Congresswoman Alexandria Ocasio-Cortez—are both quite young. If he won in 2024, he would be forty-three years old and one day. AOC doesn’t even turn thirty-five until October of 2024, but technically she could run, as she would be of age on election and inauguration day.

Joe Biden IS old, and so are a lot of others. In his legitimate defense, he has overcome a stuttering problem, and misspeaks and gaffes have been a continual part of his political career. As a child, his mother even threatened his elementary teacher, a nun, saying to her “If you ever talk to my son like that again, I'll come back and rip that damn bonnet off your head, do you understand me? Joey, go back to class.” It would be sad if some are exploiting a disability under the ruse of ageism. Biden famously fell off his bike this past summer, but let’s consider that at seventy-nine he is still riding a bike. He’s also publicly challenged a critic to a push up contest.

Ageism is a problem for many Americans. It is a simple fact that with a few exceptions (a decrease in life expectancy due to the opioid crisis and other causes) that people are living longer, which has a ripple effect on our society and economy. CBS Sunday morning recently did a segment on ageism.

I am neither a lawyer, nor legislator, but I have a basic understanding of how things work. Since the Constitution has minimum age requirement, I would presume a Constitutional Amendment would be necessary to add maximums. Does anyone, on either side, think that is possible in our polarized society? Even if it were remarkably quick, there is no way it would be applicable in 2024, and whoever was elected then would be grandfathered in. Biden or Trump would be limited to two terms after 2024 anyway.

Hypothetically, if someone like John Kerry or Mitt Romney were drafted, ran, and won in 2024, and the law was in effect, they would presumably be grandfathered as well for 2028. This isn’t going to happen overnight. If you apply age limits in the Executive Branch, what about the Judicial Branch? Oliver Wendell Holmes Jr. retired from the Supreme Court at the age of ninety in 1932. Ruth Bader Ginsburg was still serving when she passed in 2020 at the age of 87. In the Legislative Branch, Senator Strom Thurmond was reelected by the people of South Carolina in 1996, and served until 2003, when he was one hundred and one years old. We have had older Americans serve before.

Does age matter in the White House? In 2021 CSPAN, which one must presume is non-partisan, conducted a poll of historians to assess our best and worst presidents. Kennedy, the youngest president to stop serving was forty-six when assassinated and he ranks eighth. Ronald Reagan, two weeks shy of his seventy-eighth birthday, is ninth.

When Martin Luther King said in front of the Lincoln Memorial that we wanted a would where we judge people by the content of their character and not the color of their skin, perhaps we should do the same with our leaders longevity. Age shouldn’t matter.