Carl Mirra is associate professor at Adelphi University and author of The Admirable Radical: Staughton Lynd and Cold War Dissent, 1945-1970 with a foreword by Howard Zinn. 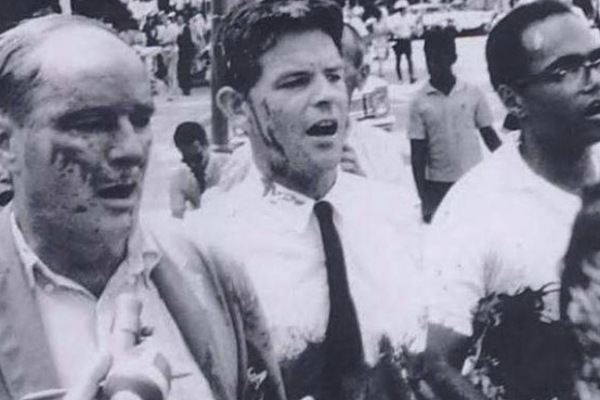 The three are covered in red paint thrown at them by counterdemonstrators.

[A previous caption indicated that the protestors had painted themselves to symbolize blood shed in Vietnam. The author of this article has requested that this be corrected. -Ed]

Legendary activist, historian and labor lawyer Staughton Lynd died on November 17 from multiple organ failure. He was 92 years old and only days away from celebrating his 93rd birthday. For me he will always be a mentor and friend. He is survived by his wife Alice, children Lee, Barbara and Marta, along with his grandchildren and great grandchildren.

It seems apt that H-PAD  (Historians for Peace and Democracy, formerly Historians Against the War) asked me to write a tribute to Staughton. I first met Staughton in 2004 at a Historians Against the War-sponsored panel at the American Historical Association annual meeting in Washington, DC.  I soon found myself organizing a series of panels with Staughton on GI resistance. I traveled to his home in Niles, Ohio, where he worked for various causes tirelessly, side-by-side with his wife Alice. Howard Zinn once said that he became “instant friends” with Staughton and I feel something similar, having experienced his “sweet tempered generosity,” as Todd Gitlin once put it. So much so, that I was stirred to write a biography of Staughton titled Admirable Radical, both a nod to a Thoreau article of the same title, but also because countless people I contacted to interview for the project described their admiration for this “hero” of justice.

Staughton was born in Philadelphia on November 22, 1929, the son of arguably the United States’ most famous sociologists of the time, Robert and Helen Lynd. Lynd’s life is a veritable window on recent US history. He traveled to the south in 1961 to teach at Spelman College, an all-women’s, historically Black college, to thrust himself into the civil rights movement. There he encountered a young Alice Walker, who gained fame as the author of the Pulitzer Prize winning novel A Color Purple. She called him “her courageous white teacher,” who symbolized “activism at its most contagious because it was always linked to celebration and joy.” He taught there alongside his lifelong friend and fellow historian Howard Zinn.

Along with Zinn, Staughton participated in the legendary Mississippi Freedom Summer, putting his body on the line as Director of its Freedom Schools. Around this time, he completed a PhD in History at Columbia University. Freedom Summer, Staughton told me, was one of the most significant experiences of his life. There he experienced consensus decision-making, or participatory democracy, a so-called “beloved community” of a band of brothers and sisters working together for racial equality. But the sheer violence of America at the time saw that circle of love yield to Black Power. Staughton recalls an activist telling him that white people were best working with other whites to teach them the ills of racism. Staughton took this to heart as he traveled North to Yale University, having accepted in July 1964 an assistant professorship in history for $8,000 a year.

While at Yale, Lynd become a prominent anti-Vietnam war activist. The New York Times declared in 1965 that Lynd was the “elder statesman of the New Left.” In April 1965, Lynd chaired the Students for a Democratic Society (SDS) sponsored March on Washington, the largest anti-war demonstration in US history to date. Later that year, Lynd participated in a series of protests at the Capitol on the twentieth anniversary of the Hiroshima atomic bombing. Life Magazine featured a full-size photo from the demonstration of Lynd, alongside Dave Dellinger and Bob Moses, in which they were splattered in red paint. That image unsettled his colleagues at Yale. The then-chair of the history department called the activists “mad,” having complained that the “photo of Lynd with blood across him and his arm raised really represents the mood he had cultivated in himself.” Lynd’s arm was not raised, and he was well-known for his calm demeanor.

Later that year Lynd took an unauthorized trip to Hanoi, then enemy territory, with the Communist Party member and historian Herbert Aptheker and SDS leader Tom Hayden. They sought to learn about the “other side.” Staughton learned that the Vietnamese would not surrender and that the US must withdraw. This radical position eventually was accepted in the mainstream (it was secretly understood by some Pentagon planners at the time).

While in Hanoi, Staughton denounced the Johnson administration’s “lies,” having called the Vietnam war “immoral, illegal and antidemocratic.” Yale’s president, Kingman Brewster, released a formal statement that echoed the law of treason, saying Lynd gave “aid and comfort” to the enemy and it was a “disservice” to the cause of peace. The US State Department visited Lynd’s home to query him about the Hanoi trip. These troubles would eventually lead to Lynd losing his job at Yale and being blacklisted from academia. As one Yale historian sums it up, Lynd had “more courage than I did…he put his money where his mouth is.”

Having lost his career, Lynd recalled wandering aimlessly through the streets of New Haven. But he would soon reinvent himself as a labor lawyer and resettled near the steel mills of Youngstown, Ohio. For Lynd, it was a version of “accompaniment,” a stance he says he learned from El Salvador’s Archbishop Romero, who was assassinated in 1980 while delivering mass because he accompanied the poor in opposition to those waging war on them. In Niles, Lynd famously fought to keep the steel mills open. But it is here that a local worker best summarizes Lynd’s life of commitment and where his allegiances resided.

In August 1977, after the Lynds had been living in Youngstown for a year, a story appeared in the Youngstown Vindicator, which included the famous Life Magazine photograph. Jack Walsh, a worker at the local Schwebel Baking Company, had just been discharged for leading a wildcat strike. As Jack sat in a bar wondering where he could find a lawyer, he stumbled across the newspaper article on Lynd and the picture captured Walsh’s attention. He thought, “Now, here is a lawyer I can trust.” Whereas Lynd’s Yale department chair viewed the very same photograph with disdain, this worker found someone he could admire. These competing interpretations serve as a metaphor for Lynd’s life. He offended the advantaged class, but was often embraced by the working class. As Mike Stout, a United Steelworkers of America Local 1379 member puts it, “I don’t admire Lynd for his writings…or for being a famous anti-war guy…I admire him because he got down in the fucking trenches with us [steel workers].”

Indeed, Lynd was always in the trenches fighting for a better world, and for that he remains a “admirable radical” and, for that matter, a beautiful person. As Staughton wrote after the passing of Howard Zinn…“Presente!”