Joel Best is Professor of Sociology and Criminal Justice at the University of Delaware. 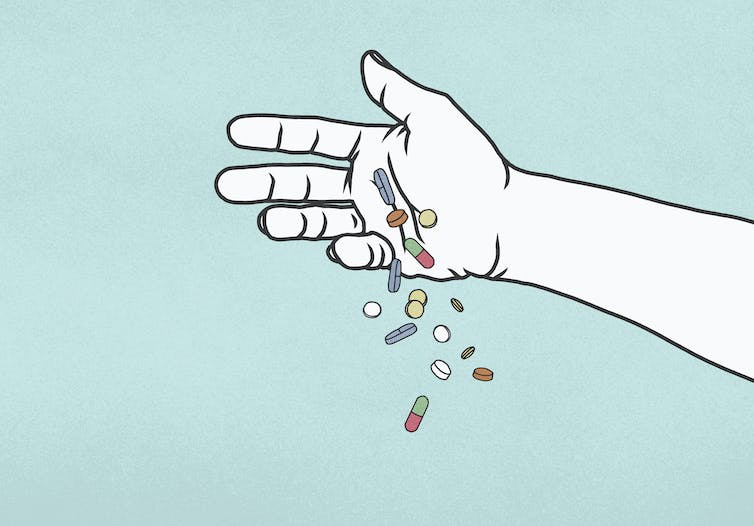 Trends in recreational or illicit drug use often make the jump to Halloween warnings. Malte Mueller/fstop via Getty Images

Every year around the middle of October, reporters start contacting me wanting to talk about rumors of contaminated Halloween treats.

That’s because I track media coverage of reported incidents of trick-or-treaters receiving razor blades in apples or pins and poison in candy bars. My data goes back to 1958, and my principal finding is simple: I can’t find any evidence that any child has ever been killed or seriously injured by a contaminated treat picked up in the course of trick-or-treating.

This often surprises people who assume that Halloween sadism is both very real and very common.

Stories about contaminated treats are best understood as contemporary legends. They’re tales we’ve all heard, that we’ve been assured are true. They warn that we live in a dangerous world filled with villainous strangers who could harm us if we aren’t careful.

This year, reporters began reaching out earlier than usual, in late September, and they wanted to talk about a new alleged threat: “rainbow fentanyl.”

Fentanyl is a very powerful synthetic opioid that has caused thousands of overdoses and deaths over the past two decades. In August 2022, drug enforcement authorities noted that pills containing fentanyl were being manufactured in various colors. DEA Administrator Anne Milgram said, “Rainbow fentanyl – fentanyl pills and powder that come in a variety of bright colors, shapes and sizes – is a deliberate effort by drug traffickers to drive addiction amongst kids and young adults.”

Many news outlets covered this story, including the notion that the colors might be some sort of marketing ploy to attract younger drug users. But then some people started connecting rainbow fentanyl to Halloween.

Interviewed on Fox News on Sept. 20, 2022, Republican National Committee Chairwoman Ronna McDaniel declared, “Every mom in the country is worried, what if this gets into my kid’s Halloween basket?” Other Fox commentators suggested that parents might want to protect their children by not letting them go trick-or-treating this year. And, to prove the bipartisan appeal of protecting children, Senate Majority Leader Chuck Schumer, a Democrat, repeated the warnings.

It’s worth considering what’s familiar and what’s new about these warnings.

One fairly standard element is commentators’ readiness to link September crime news to the possibility that it might presage what could happen on Halloween.

In 1982 there was a spate of Tylenol poisonings – seven people died after purchasing and consuming tampered packages of pills. Many commentators then warned that parents needed to be extra vigilant when examining Halloween treats. Those deaths also led to a dramatic increase in protective packaging for all sorts of products to discourage tampering. 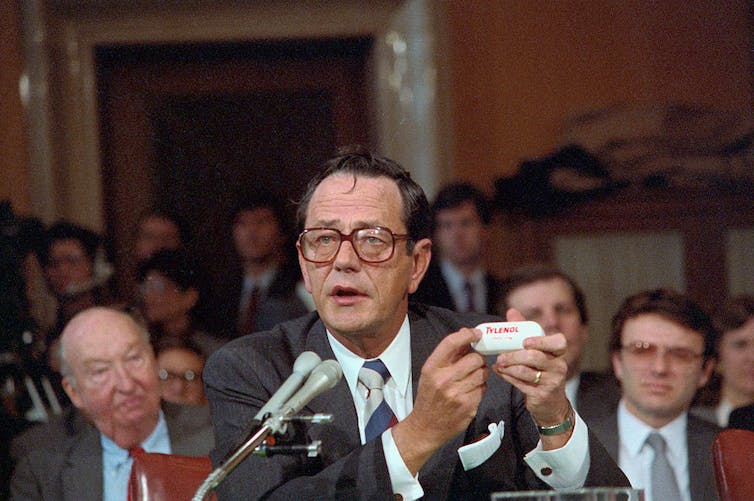 David Clare, president of Johnson & Johnson, testifies before a Senate subcommittee after a spate of Tylenol poisonings. Bettmann/Getty Images

Similarly, the 9/11 terrorist attacks led to rumors about Halloween 2001 threats – that there were plans to attack a mall where some parents let their children go trick-or-treating, or that terrorists had purchased massive amounts of candy, presumably so they could poison the treats before distributing them.

Trends in recreational or illicit drug use often make the jump to Halloween warnings. In 2014, the year that Colorado first allowed state-licensed retail sales of recreational marijuana, the Denver Police posted online warnings that parents ought to keep an eye out for THC-laced edible candies in Halloween treats. Yet after Halloween had passed, a department spokesperson admitted, “We are not aware of any cases of children ingesting marijuana candy during Halloween season.”

Similarly, in 2019, September reports of deaths caused by vaping black-market THC-infused cartridges were coupled with news that Pennsylvania authorities had confiscated commercial THC candies – supposedly smuggled from a state where they could be purchased legally – to generate another round of Halloween warnings.

The irrationality of it all

One obvious hole in these concerns is that drugs tend to cost more than candy – marijuana edibles, for example, run somewhere in the neighborhood of a dollar or two per dose or more.

Fentanyl is considerably more expensive. It is not unreasonable to wonder just what a fentanyl dealer’s overarching goal might be in passing the drug off as candy. The suggestion that a school-age kid would go from accidental user of fentanyl to a paying addict is far-fetched.

Of course, the villains in contemporary legends aren’t expected to behave rationally. Ask why gang members would attempt to kill motorists who blink their headlights at them – an urban legend from the 1980s – and the response is likely to be, “That’s just the sort of thing those sadistic people do.” It might not make any sense for someone to give a brightly colored opioid pill or THC-infused candy to a small child, but it isn’t impossible, is it? Such reasoning is thought to justify ringing the alarm bells.

Often there is a kernel of truth to these fears. Certainly fentanyl is a dangerous drug. But American history can be read as a long line of fears about witches, immigrants, drugs, conspirators and so on. These fears emerge as reflections of current social changes. Yes, things are always changing, and this can always frighten some people. But it is also true that, in retrospect, these fears are usually exaggerated.

What seems new about describing rainbow fentanyl as a Halloween danger is the willingness of important political figures and news media outlets to spread the warnings. Most past claims about Halloween sadism lack such prominent spokespeople.

But in a time when many news outlets seem intent on maintaining their audiences by frightening them, and increased political polarization seems to stall efforts to devise workable social policies, calls for protecting our children from the threats of boogeyman drug dealers return us to the spirit of Halloween: offering up fresh ways to keep people scared.