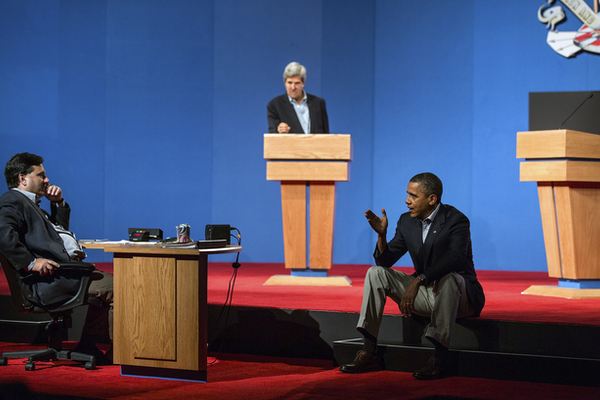 October means debate time in election years, and this year’s midterms should bring some interesting ones. The US Senate race between John Fetterman and Dr. Oz should be fascinating on a number of fronts. I can’t wait to see if the behemoth lieutenant governor shows up in a Carhart hoodie and gym shorts. Ever since Abraham Lincoln and Stephen Douglas traveled Illinois in 1858, candidates have often squared off verbally. A decade ago, the incumbent president almost blew it.

Barack Obama is a very competitive man, if you haven’t noticed. He grew up a bi-racial child in a broken home, his high school basketball team won the state championship his senior year, was the first black leader of the Harvard Law Review, State, then US senator in his adopted Illinois, and was the fifth youngest person elected President of the United States. President Obama was so competitive that he resisted golfing with Speaker of the House John Boehner for bonding and legislative cajoling because the Ohioan was a better player. Yet, a decade ago, on October 3, 2012 during his reelection campaign, Obama got his clock cleaned by former Massachusetts Governor Mitt Romney in their first debate in Denver, Colorado.

This is unusually common when the incumbent president faces off with the challenger across the debate stage. After the famous Kennedy/Nixon debates of 1960, there wasn’t another debate until 1976. That October, President Gerald Ford infamously remarked “there is no Soviet domination of Eastern Europe and there never will be under a Ford Administration.” Um yes sir, there has been for three decades now. Four years later against Ronald Reagan, Jimmy Carter told the nation he discussed nuclear weapons with his thirteen-year-old daughter Amy. Even Ronald Reagan, always on his mark as a former actor, came out sluggish in his 1984 debate with Walter Mondale.

The problem is two-fold. The challengers have to go through often arduous primary fights to secure their party’s nomination, and of late participate in a ridiculous number of debates. They are in stage shape like a well-conditioned athlete. No incumbent has faced a primary challenge since George H.W. Bush in 1992 (he was caught glancing at his watch in one debate that fall) and are busy with governance and rusty in campaigning.

Obama inherited two foreign wars and a downward-spiraling economy. The Tea Party was created, and much of the reason was opposition to him and his policies. The economic recovery of the Great Recession was going slowly, and both Carter and the elder Bush could attest that bad numbers made a second term a more formidable challenge for them.

Ron Klain, who coincidentally is currently President Biden’s chief of staff, was the lead debate coach for Obama’s preparation and had been advising Democrats on debating for two decades. He warned him “over the summer that he would probably lose the first debate” if history was any guide. Klain was assisted by “veteran Washington attorney Bob Barnett, an expert on debating, to sharpen the performance of Senator John Kerry, who played Romney in warmups.” Kerry had experience from his own debates against George W. Bush in 2004.

Barack Obama was a good student and did his homework. This is one president who devoured briefing books. The debate itself was something he found distasteful, a necessary evil. “He saw debates as phony through and through: stagy, hokey, superficial and insubstantial.” A second problem was that the president wasn’t particularly fond of his opponent. Both had happy and stable marriages, and were graduates of Harvard Law School, but beyond that had little in common. After graduation, Obama became a community organizer and Romney made millions with Bain Capital.

A three-day debate camp outside Las Vegas did not improve Obama’s performance. Presidential campaigns now go to great lengths to prepare candidates for these much-watched forums. Besides high-level stand-ins like Kerry, debate stages are built exactly like the ones to be used in the actual event. Obama had the substance, but he was very deficient on style. At one point he even confessed “I hate this. I’m counting down the days until is over.” None of his staff knew what they were going to get when he appeared on stage with Romney.

The challenger was behind in the polls and knew it. He prepared assiduously and his staff knew this was his best chance to reset the deck. Romney began in June, having sixteen mock debates, with Ohio Senator Rob Portman playing Obama. The Obama campaign had employed a unique strategy of frontloading advertising early (this was traditionally saved until after Labor Day) and aggressively creating an image of Romney. “Chicago (their headquarters) had perhaps been too effective in making Romney look like a rich and untrustworthy twit.”

The debate was held on October 3rd, which was coincidentally the president and first lady’s twentieth anniversary. This actually worked to Romney’s advantage, opening with “Mr. President, on your anniversary, I’m sure this was the most romantic place you could imagine- here with me.” Romney, who many have described as looking like he came out of central casting, was able to able to humanize himself with this light touch, even getting Obama to laugh. For the rest of the evening, he seemed do be enjoying himself and Obama did not.

There was a big change from 2008 to 2012: Twitter had grown exponentially in this time period. The site became the equivalent of sports play-by-play during the contest. In the ninety minutes, 10.3 million debate tweets occurred, 159,000 per minutes, an astonishing number. A consensus was easily reached: Romney dominated the president and was back in the race. Every poll reinforced this. Romney was really good and Obama was not.

Fortunately for the president, two debates remained. Additionally, the Obama campaign had two full weeks to hit the reset button, and in the meantime, Joe Biden fared well against Paul Ryan. The next matchup was a townhall format, and Obama was ready. He was aggressive and “this time around, Obama was largely able to stave off Romney’s attacks, with one notable assist from moderator Candy Crowley.” She correctly fact checked Obama calling the Benghazi attack an act of terror, a statement that was not appreciated by Romney or his team. Romney’s “binders full of women” gaffe didn’t help his cause.

Obama had harnessed his disdain for his opponent for the first two sessions, but let that slip in the third contest, after Romney attacked the president for the decreased size of the Navy since 1916. Obama curtly countered “well governor, we also have fewer horses and bayonets. We have things called aircraft carriers and planes land on them. It’s not a game of Battleship.” The September 2012 issue of The Atlantic featured lookalikes playing the two men in a boxing match. After that verbal punch, Romney may have wished they were in combat in that forum.

Hurricane Sandy hit which didn’t help Romney and Obama would go on to be reelected. Romney would be elected to the US Senate from Utah six years later where he has been a critic of former President Donald Trump.

After John Fetterman suffered a stroke in mid-May, it is curious that his opponent (a medical doctor) has focused his attacks on his ability to serve. They will debate just once, an understandable strategy for the Democrat, but with just one public forum, Fetterman won’t have the opportunity for a do-over like Obama did.