"Pour Myself a Cup of Ambition": The 1970s Echo in Today's Union Revival

by Ellen Cassedy and Lane Windham

Ellen Cassedy was a co-founder of 9 to 5, the national association of working women. She is the author of Working 9 to 5: A women’s movement, a labor union, and the iconic movie (Chicago Review Press, September 6, 2022, foreword by Jane Fonda).

Lane Windham, Ph.D., is the author of Knocking on Labor’s Door: Union Organizing in the 1970s and the Roots of a New Economic Divide and is the Associate Director of Georgetown University’s Kalmanovitz Initiative for Labor and the Working Poor. 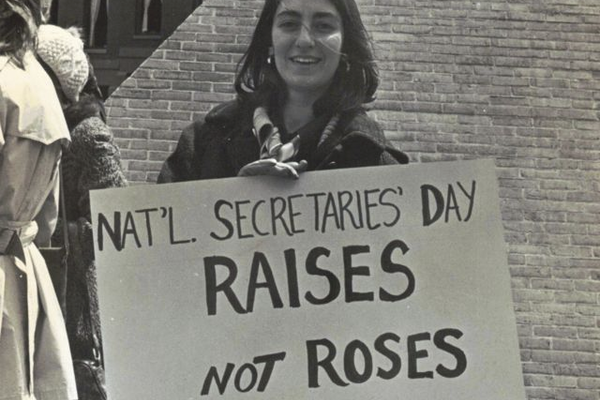 Unions are clearly having a moment. A diverse group of working people are forming labor unions at Starbucks, Amazon, REI, Apple stores, Google Fiber, and more.  Women and people of color are often at the helm of this new surge, which echoes another pivotal moment for labor fifty years ago.

In the early 1970s, workers sounded a call for rights and respect. People of color and white women had gained new access to the job market following the 1964 Civil Rights Act.  They didn’t just want a job – they wanted a good job – and so they powered a new wave of unionizing efforts.

A group of clerk-typists in Boston were part of this wave when they formed an organization called 9 to 5.  The 20 million women office workers in the U.S. economy were basically invisible.  Back then, when people pictured a worker, they saw a man in a hard hat, brandishing a wrench.  But the early 1970s was the great tipping point, when more women than ever began working outside the home.  As women poured into the workforce, they brought with them new ideas and new dreams generated by the civil rights movement and the women’s movement. Women of all classes, races, and ages looked around their workplace and felt they were all in the same boat.

Fueled by a host of grievances – low pay, unequal pay, few career ladders, and the common phenomenon of office women being referred to as “girls” regardless of age – the 9 to 5 movement took off.

Not all of those involved called themselves feminists.  But they created their own kind of feminism – a workplace feminism – and it was powerful.

The 9 to 5 movement took on the corporate titans and won millions in back pay and raises.  They lit a fire under government anti-discrimination enforcers. In affiliation with the Service Employees International Union (SEIU), they formed a woman-led union called District 925.

When they held bad boss contests, entries poured in. There was the boss who’d asked his secretary to sew up a hole in his pants – while he was wearing them – and the one who fired his secretary for bringing him a corned beef on white instead of rye.  They created a Bill of Rights for Women Office Workers.  They erected a giant coffee cup in the middle of downtown – no explanation necessary.

These efforts took place alongside those of other women workers – Stewardesses for Equal Rights, the Coal Employment Project, Wages for Housework, an organization for sex workers called COYOTE, the Coalition of Labor Union Women, and more. Hospital workers and teachers, too, organized for their job rights.  Jane Fonda’s 1980 hit comedy “9 to 5” and Dolly Parton’s enduring anthem gave the movement an enormous boost.

Yet progress did happen. Today, issues that used to be considered personal matters are matters of policy – corporate policy, government policy, union policy.  Pregnancy discrimination and sexual harassment are illegal, for instance.  Sex-segregated “help wanted” ads are a thing of the past.  Women can get credit cards and home loans in their own names.  Countless bosses have learned to get their own coffee.

Nonetheless, being a working person today is in many ways tougher than it was 50 years ago. In today’s gig economy, it can take a patchwork of jobs to put food on the table.  Many workers are on call 24/7.  Second-by-second computerized monitoring causes agonizing stress for many workers. Fewer workers have break time or sick days or pension coverage. Students and families struggle with debt.   People of color remain the most likely to hold the lowest-paid, most dangerous work, and were the hardest hit by the pandemic.

And while managerial jobs have opened up for college-educated women since the 1970s, working class women remain stuck in the kinds of low-paying, dead end service jobs that have become the norm.  Race and sex discrimination are still widespread. Millions of women lost their jobs in the pandemic, or found they had no choice but to quit because of the lack of affordable child care.

Despite these challenges – perhaps, in fact, because of them – a new surge of workplace activism is underway. Support for unions is way up, especially among young people. As with the rising of working women 50 years ago, some workers are organizing within established unions and others, like the Amazon Labor Union, are organizing independently.

New tactics are emerging, spearheaded by such initiatives as the Fight For $15, Coworker.org, the National Domestic Workers Alliance, and One Fair Wage.  9 to 5 remains active, buoyed by this activity. We’re hearing new voices, from new demographics, who have risen to the top of America’s unions, all the way up to Liz Shuler as the president of the AFL-CIO.

This Labor Day, we’re hopeful about the renewed energy and excitement for workplace organizing, and cautiously optimistic that today’s workers may overcome the sorts of corporate tricks and tactics that blocked workers’ organizing in the 1970s.  “You're just a step on the boss man's ladder,” reminds Dolly Parton’s timeless “9 to 5” theme. “But you got dreams he'll never take away.”