The Personal is Critical: How Should Early Americanists Think of David McCullough as a "Gateway" to History?

Rebecca Brenner Graham earned her PhD in history from American University in 2021. Her dissertation, "When Mail Arrived on Sundays, 1810-1912," traces American nineteenth-century religion-state relations through the lens of Sunday mail delivery. 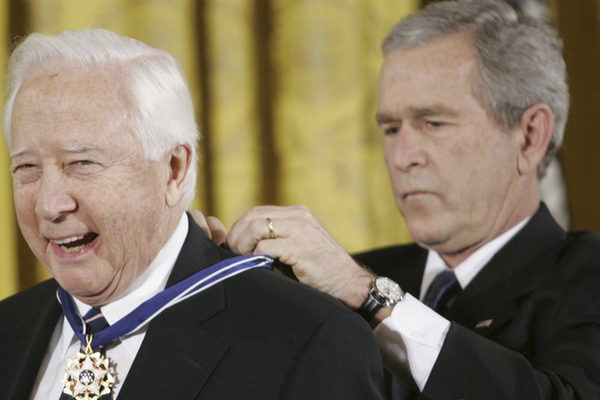 Earlier this month, award-winning and best-selling author David McCullough died at the age of 89. Following his death, historians on Twitter shared condolences, memories, and critical reflections on McCullough’s role in shaping historical narratives and the professional motivations of individual historians. Perhaps not surprisingly, the confluence of personal experience, critique, and the politics of historiography and of speaking of the deceased came together in ways that occasionally became contentious. Yet, this contentiousness is important to consider.

In one exchange, Lindsay Chervinsky penned a Bulwark essay about how McCullough’s John Adams was so artful to her that she dropped her law school applications in pursuit of the historical profession. She thoughtfully included a paragraph criticizing McCullough’s last book Pioneers for its settler-colonialist assumptions. David Waldstreicher posted on Twitter that McCullough’s previous work was not so innocent, that it also perpetuated settler-colonialist assumptions, and that paying homage to McCullough’s body of work upon his death constitutes “founders chic.” Some Twitter fighters pointed out more positively that McCullough was a “gateway drug” whose books originally attracted current historians to pursue the profession, and for good measure some noted that Waldstreicher’s wording came across as sexist in the context of a woman historian’s discussion of her professional development. 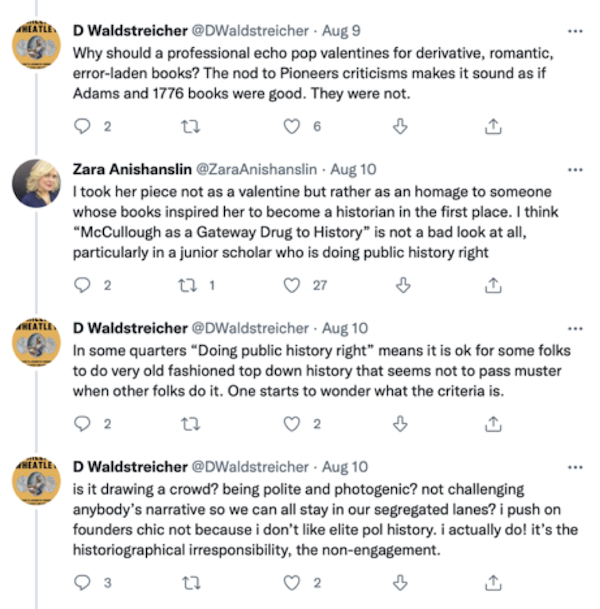 Did founders chic authors like David McCullough do any good for the evolution of historical scholarship itself? Probably not. Did he do any good for historians personally? Possibly (and in some cases, it would seem, certainly). While both of these arguments are potential fuel for perpetual debate, I’d like to shift gears and ask how the two questions—about critical engagement and our personal experiences as historians and professionals—can be brought together. Can we be reflective about how dominant narratives invite (or don’t) us to imagine ourselves as future historians?

I consumed my fair share of gateway drugs to history on the way to becoming a historian of the early American republic. I had books growing up, and I collected souvenirs from the historically oriented road trips that my family could afford to take. By the nineties when I was in grade school, I saw myself in the popular historical narrative through books about women in history and female characters in history shows, and American Girl dolls. When I was seven, I used a book entitled Yo, Millard Fillmore to memorize the Presidents and recite them to really anyone who’d observe and validate my “passion” for history. I wanted to love history as much as anyone else in the world loved history. I was Abraham Lincoln for Halloween at age ten and Benjamin Franklin for Halloween at age twelve. I devoured the Childhood of Famous Americans series of children’s biographies, The Who Was? Series, and media such as 1776 and Liberty’s Kids. As late as college I believed that this collection of experiences made me especially equipped to study history at a graduate level. I was wrong. Those experiences alone didn’t equip me with insight or make me special.

My initial love for history stemmed from a place of power and privilege. I want to be critical of that in service of what I’ve learned and in service of people who didn’t share my power and privileges. A part of that privilege might be taking history as something that one easily consumes because one recognizes oneself in the narrative. Who might not have seen themselves in top-down American historical narratives as children? People who weren’t white. People who didn’t have resources to consume and to take road trips. People whose families’ precarity couldn’t afford them the luxury of ‘following your passion.’

While ‘gateways’ to history are personal and valid, they reveal structural problems with the gates themselves. Founders chic emerged in some ways as a backlash against the work of historians – women, scholars of color in particular – who deeply felt the omissions, exclusions, and diminishments in the established narrative and pushed against it.

Popular, but ‘problematic’ enterprises can nevertheless be powerful entry points to critical historical thinking. Take for example: Disney World attractions, American Girl dolls, and of course, founders chic. Everyone uses representations of the past to make meaning in the world. What distinguishes historical thinking is a critical assessment of what’s included, written, or presented.

Thanks in large part to the work of historians who worked from a place of questioning their marginal position in the dominant narratives, the profession has mostly moved past heroifying founders. It’s mostly moved past heroifying people who heroify founders like David McCullough, Ron Chernow, and Joseph Ellis. But outside the community of academic historians, this movement is less an evolutionary fact than a contingent and tenuous shift.

Throughout the 1970s and 1980s, academic early Americanists diversified the cast of characters in their narratives. Yet, David McCullough renewed popular appreciation for the “obnoxious and disliked” (his words in 1776) founder, and by the 1990s, the genre now known as “founders chic’” exploded to enchant the American masses in the familiar tropes and character analyses of their founding heroes —and, clearly, to influence those outside the profession looking in to understand particular kinds of work as ‘history.’

Several of David McCullough’s books sat on my shelf for over a decade. I never read them. Why did I collect them if I didn’t bother reading them? I thought that they increased my validity as an aspiring historian. Growing up, I can remember thinking owning such books was key to being a history expert. This assumption itself is a problem.

Who’s inspired by McCullough’s founder’s chic and how or why they’re inspired now contributes toward shaping the historical profession. The ‘historical profession’ itself doesn’t mean just inside the academy. In a growing, changing, political and professional landscape, we must take greater care to interrogate the powerful, privileged, and problematic roots of our passions.

Historians, after all, are not isolated outside observers. We’re part of the story.