Ultimately, David McCullough Succeeded by "Writing the Book I Wanted to Read" 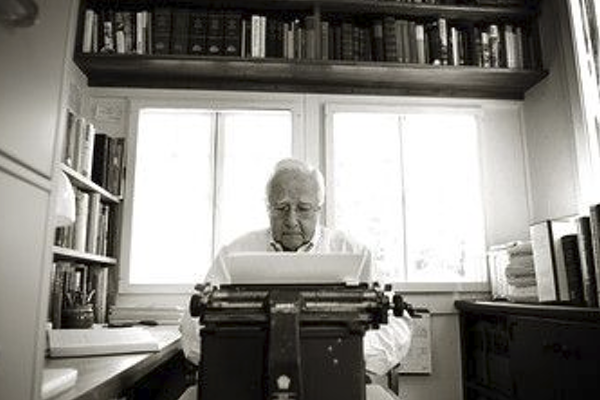 On a shelf in my living room, I have a wooden memento from Monticello, the home of Thomas Jefferson saying “I cannot live without books.” I own a lot of books, hundreds, and Mr. McCullough’s are among the best I own, or have been written in the last half century, hands down. He has sold more than ten million books, and all are still in print. Remember please, many are thick biographies, not James Patterson or John Grisham novels.

I did not grow up in a house with many books, but first saw Merle Miller’s Plain Speaking, an oral history of Harry Truman on a shelf in my youth. When McCullough’s 992-page volume came out in the early nineties, I loaned it to my dad after I finished it. He was not an educated man, but he not only read it, but loaned it to enough people that I eventually got it back with the book’s spine split in half. That’s how readable that tome is. I loved history before I discovered Mr. McCullough, but be made me love history even more.

McCullough was a compelling storyteller on both the page and the screen. It’s impressive when you win not one but two Pulitzer Prizes for writing history, narrate Ken Burns The Civil War, the first of many documentaries, but also hosted the PBS series The American Experience forty-eight times.

The Pulitzers were for “doorstop” yet compelling biographies of Harry Truman (1992) and John Adams (2001). HBO put both on the screen, with Gary Sinise bringing the thirty-third president to life. Paul Giamatti and Laura Linney became John and Abigail Adams in a Tom Hanks-produced miniseries that won thirteen Emmy awards. Hanks made a mini documentary of the author in a short documentary called “Painting with Words” that brings the author to life.

Watching McCullough lecture, or be interviewed, is as interesting as reading his work. You learn and laugh; he educates and entertains. He could spend ten years on a book (Truman), yet relate anecdotes and stories in his easy, relaxed manner. I will confess I have watched his Booknotes and In-Depth shows on CSPAN multiple times and enjoyed every second. I rewatched these interviews and remember how he taught a young teacher (me) the importance of telling stories to bring history alive. I think the kids who sat in my room heard a few yarns spun.

McCullough admits that as a literature major in college, he was not a “trained historian.” As if that mattered. He as able to write captivating works on a variety of American history subjects and bring his characters to life. You opened his books, and you time travelled across the words as he did when he composed them. As an indefatigable researcher, he left no stone unturned and as his contemporary Robert Caro famously says “he turned every page.”

He loved libraries, and spent many hours within, but also found it indispensable to visit the sites where events occurred and “feel them.” To do this, he arranged to run through the United States Capitol to recreate, and understand, what it was like for then Vice President Harry Truman after receiving a message to come to the White House on April 12, 1945. FDR had just died, and Truman didn’t know he was technically already president.

For “Painting with Words,” the historian, then in his mid-seventies, climbed the historic tower at Christ Church in Philadelphia, as John Adams had. It was over one hundred feet high, the view was magnificent, and this acrophobe noted there was no railing up there. That is “living history,” but McCullough spent thousands of hours reading primary sources like letters, complementing that with secondary works. He describes that one must “marinate your head” to understand another time period.

He famously worked in what we would call a shed, but he designated his “world headquarters,” an eight-by-twelve foot structure with over eight hundred books and a typewriter—yes, every word David McCullough produced was on a 1960’s Royal typewriter. The building lacked a phone, music, or a computer. This man, often seen in a dark blazer, shirt and tie, and gray or khaki pants, was truly old school.

After graduating from Yale, the Pittsburgh native worked for a new magazine called Sports Illustrated, then, motivated by President Kennedy’s “Ask not…” inaugural address, took a job with the United States Information Agency, followed by a dozen years with American Heritage. There he began reading about the 1889 Johnstown Flood (where 2200 people perished), and was disappointed with what he found. He vowed to “write the book he wanted to read,” and the rest is literally, history. Wonderful, glorious history. Twelve more books would follow, descriptions of the construction of the Brooklyn Bridge and Panama Canal, along with the trio of presidential biographies (also covering Theodore Roosevelt’s early years.)

A few days after his passing, I met my friend and former colleague John, who has also read many of the books. John said “he turned Harry Truman into one of my favorite presidents, and John into one of my favorite founding fathers. His genius in humanizing historical figures and bringing American history to life was unsurpassed.” Well said, by a very good teacher of history.

In 1951 David McCullough met his future wife Rosalee, whom he married in 1954. She passed in June, just two months before his death. His cause of death wasn’t indicated, but I’d like to think that after sixty -eight years of marriage he missed his life partner, and wanted to rejoin her. I hope they have Royal typewriter ribbons available in the great beyond. Thank you, sir, for your contributions and American History, and humanity.