A Brief History of the Vatican and Western Canadian Missions

Roberto Perin is Professor Emeritus of the  History Department and School of Public and International Affairs at York University, Canada. 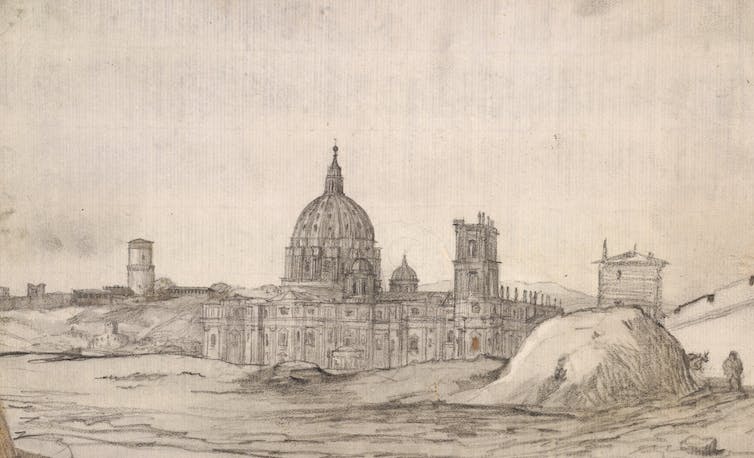 Drawing of St. Peter’s cathedral, Rome, with the Vatican wall in the left distance, c. 1640. (The Trustees of the British Museum), CC BY-NC-SA

Pope Francis’s historic visit to Canada and his much-anticipated apology for the Catholic Church’s role in abuses Indigenous people suffered at residential schools raises the question of the overall relationship between the Vatican and Indigenous Peoples.

In my book Rome in Canada: the Vatican and Canadian Affairs in the Late Victorian Age, I examined how lobbies based on divergent interests in government, church representatives in Canada and the Vatican itself operated in an age of expanding colonial powers and Catholic evangelism.

Today, the Catholic Church is still popularly seen as a tightly centralized organization under absolute papal authority. In fact, it is one where competing interests often vie for influence and power.

For example, in the three decades after Confederation in Canada (1867), “an aggressive Anglo-Saxon nationalism struggled to imprint its cultural model on the emerging Canadian state.” The biggest source of tension in the church in Canada was that between French and English speakers.

Conflicts erupted about the linguistic suitability candidates for episcopal office, the creation of new dioceses, the appointment of pastors in ethnically mixed parishes and the language of instruction in Catholic schools.

In these struggles, people in the pews challenged religious authorities, priests and bishops fought each other and religious communities split along linguistic lines. The Vatican had to intervene in some of these problems, but the Roman bureaucracy itself was split in competing factions over the correct course of action.

My research of 19th-century missions and Vatican diplomacy leads me to conclude that, despite the complexities of structure and authority within the Catholic Church, the Vatican was certainly uninvolved in, and likely unaware of, agreements signed between the government of Canada and religious orders to run residential schools.

While the federal government must bear ultimate responsibility for creating and funding residential schools, religious communities, bishops and popes were variously complicit in a system that dispossessed Indigenous peoples and cruelly oppressed their children. 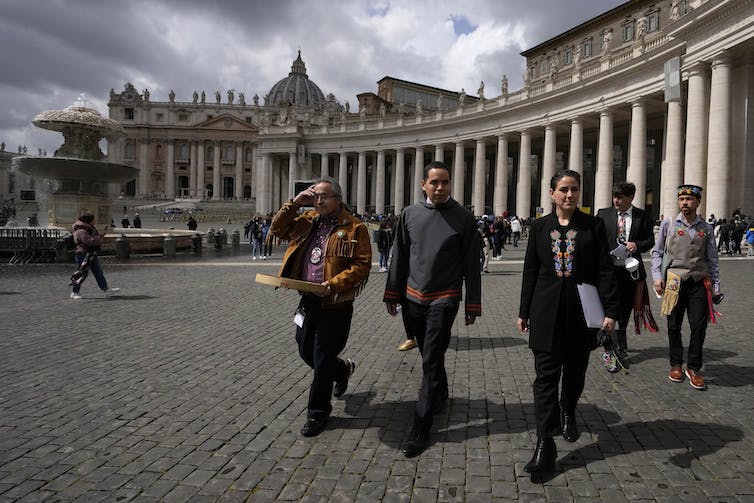 Indigenous delegates from Canada walk in St. Peter’s Square, at the Vatican, after their meeting with Pope Francis in April 1, 2022. (AP Photo/Alessandra Tarantino)

At the dawn of the 16th century, a Spanish pope, Alexander VI, created a bull (edict) Inter caetera that paved the way for the Treaty of Tordesillas in 1494. This divided the New World between Spain and Portugal, the two most powerful maritime states at the time. Not a thought was given to the hemisphere’s Indigenous inhabitants.

The bull validated the subsequent rampant exploitation of European expansionism, and is one bull often associated with the “Doctrine of Discovery.”

It is fitting therefore that an Argentine pope, Pope Francis, repudiate his predecessor’s document.

19th century ‘propagation of the faith’

As a mission territory, the lands that became Canada fell under the jurisdiction of a Vatican department, Propaganda Fide (Sacred Congregation for the Propagation of the Faith). This was established in 1622 and headed by a cardinal with the help of clerical bureaucrats.

As a result of major administrative reforms instituted in 1908, dioceses with significant Indigenous populations such as Mackenzie-Fort Smith (in present-day Yellowknife) or Hearst-Moosonee (in northern Ontario) continued to be under its rule, whereas the non-Indigenous ones were detached from it.

The actual task of evangelizing was undertaken by religious communities, like the Jesuits, who were were responsible not to Propaganda Fide, but to their own superiors often resident in Rome. After the British Conquest of 1763, male religious orders were all but eliminated and it was not until the 1840s under Ignace Bourget, the bishop of Montréal, that they returned.

Meanwhile, in 1820, Rome appointed a French Canadian resident bishop in Red River (present-day Winnipeg). Bishop Norbert Provencher was also responsible for missions in Western Canada. The Anglican Church dispatched its own workers there and were soon joined by other Protestant denominations. 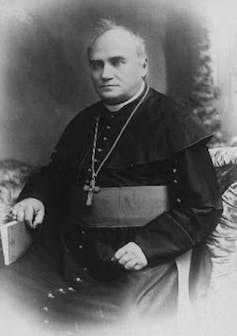 Short-staffed, Provencher went to Europe where he met Eugène de Mazenod, bishop of Marseilles and founder of the Missionary Oblates of Mary Immaculate who played a key role in the West. Alexandre-Antonin Taché, a Québec Oblate, became Provencher’s successor in 1853.

Taché ensured the French and Belgian Oblates would monopolize the nomination of of bishops for the rest of the century west and north of the Red River. Since female religious communities were recruited in Québec to staff schools and hospitals serving Indigenous communities, the Catholic Church had a decidedly French-speaking character.

At the time, there was a desire to make British North America into the image and likeness of the “mother country.” This meant two things: confining French Canadian influence to Québec, and ensuring that Indigenous Peoples become thoroughly assimilated.

The first objective found ready allies among leading English-speaking Catholics who chafed at their second-class status within the church where French Canadians comprised close to three-quarters of its members. Some Catholics of Irish origin saw themselves as being endowed with a special mission: the view existed that Providence had willed that the Irish became instruments of conversion through the English language.

This contrasted with French Canada’s providential mission which saw the French language as inextricably tied to the Catholic faith, a bulwark against North American godless materialism.

These two visions fought it out in Canada, where one by one western dioceses fell to English speakers, and in Rome, where the Irish party exploited to its advantage the prospect of mass conversions of North American Protestants to Catholicism whereby the English language was key.

Shaped by racist social darwinist 19th century views that emphasized the demographic decline of Indigenous Peoples and their eventual disappearance as distinct peoples, Ottawa forced acceptance of the Numbered Treaties on Prairie Indigenous populations that were starving in the wake of the sudden disappearance of the buffalo. The Indigenous Peoples Atlas of Canada notes a major role in the bison’s demise was “U.S. government policy aimed at taking away a key food source for Indigenous peoples.

The federal government also instituted the residential school system with the objective of ”killing the Indian in the child.“ 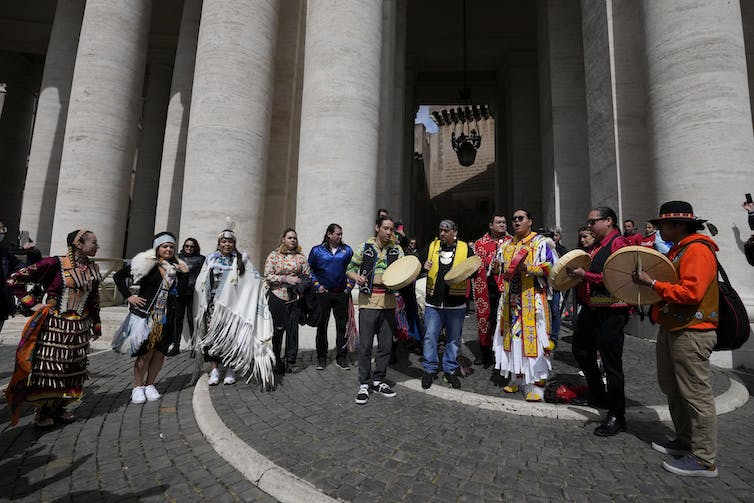 Indigenous delegates from across Canada drum at the Vatican, April 1, 2022. (AP Photo/Alessandra Tarantino)

For a modest fee these orders ran residential schools, 60 per cent of which were Catholic. It is likely that diocesan bishops had a dim appreciation of how these establishments functioned, most of them being located far from where they resided.

All the while, successive governments, obsessed with cost-cutting and austerity, reduced subsidies, which severely affected the physical, mental and moral well-being of students.

Religious communities, bishops and popes were variously complicit in a system that devastated generations of Indigenous children and caused intergenerational trauma. Residential schools and the papal bulls justifying the fallacious doctrine of discovery call out for concrete acts of atonement and reparation on the part of the church.