James D. Zirin, a former prosecutor in the Southern District of New York, is the author of the 2016 book, Supremely Partisan: How Raw Politics Tips the Scales in the Supreme Court of the United States. 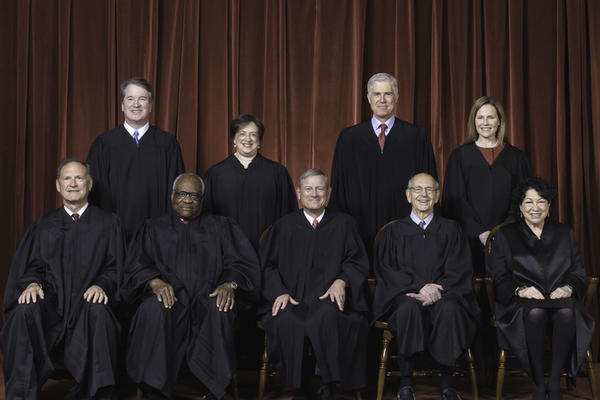 It has really come to this. Prime Minister Justin Trudeau of Canada just gave us a lecture on American democracy. In addressing the  Supreme Court abortion decision overruling Roe v. Wade he said:

Normally, we don’t need foreign leaders to give us a lecture on human rights. But this time we deserve it. The core responsibility of judges is to make the law work for everybody, and this Supreme Court has failed abysmally. Polls say that  54% of Americans want a uniform national rule preserving Roe in some form; 28 per cent think it should be overturned.

If American democracy is to endure, the country needs a Court widely accepted as an impartial umpire that can balance competing interests, as Chief Justice Roberts famously put it in his confirmation hearings, that can “call balls and strikes,” and “not... pitch or bat.” But this new Court, with three reactionary justices appointed by Donald Trump, making rulings based more in  policy than law, has forfeited all legitimacy. As a result, democracy is imperiled.

No wonder Justice Sotomayor chose the pejorative “stench” when she asked and answered her own rhetorical question: “Will this institution survive the stench that this creates in the public perception that the Constitution and its reading are just political acts? I don’t see how it is possible.”

The very structure of the common law is based on adherence to precedent. Judges are supposed to stand by their prior decisions. Roe v Wade was said to be a “super precedent,” a fixture of the legal framework. Roe had been the law of the land for almost half a century. Seven justices, including three Nixon appointees, recognized in 1973 a woman’s fundamental right to terminate her pregnancy in the first trimester of pregnancy. As elaborated nineteen years later in Planned Parenthood v. Casey , this right continues until “viability,” an objectively verifiable moment when the child can live outside the mother. Viability is now thought of as occurring 24 weeks after conception.  The decisions, both now overruled, were widely accepted.

The Chief Justice, who likes to proceed incrementally, was against overruling Roe on the record before him. He pondered whether the Court could reaffirm Roe, and at the same time uphold the statute. Nevertheless, he concurred in the judgment. The three Trump justices, joined by Justices Thomas and Alito, who for years have vowed to overrule Roe, piled on to the decision. Ignoring the middle ground, they decided, “We have the votes; let’s go for the whole enchilada.” It should have come as no surprise. Trump, during his 2016 campaign, promised to appoint justices who would “automatically” overrule Roe. And so, they did.

Alito’s opinion for the majority weirdly recites the 16th century English jurist, Lord Chief Justice Matthew Hale. Hale was the greatest judicial misogynist in the history of the common law. He believed that spousal rape was legally impossible. He sentenced women to death as “witches” based on spectral evidence.

At oral argument in the abortion case, Justice Kavanaugh said that upending prior court  rulings could be a good thing. He noted that the Court overruled the decision in Plessy v. Ferguson which upheld school segregation, 56 years after it was made; that 17 years after the 5-4 decision in Bowers v. Hardwicke, which approved the criminalization of homosexual acts between consenting adults, it overruled that decision in Lawrence v. Texas in a 7-2 split. Just wait, said Scalia in his Lawrence dissent, the next thing will be gay marriage. They approved of that too, 5-4. But these were landmark cases which overruled prior decisions to discover fundamental rights embedded in the Constitution, which like the right to terminate a pregnancy, had developed over time with societal change and attitude.

The justices sprang with alacrity to overrule Roe v. Wade to extinguish a fundamental right, and leave the fate of poor women, perhaps sick women, or women impregnated by rape or incest in the hands of mostly male legislators in perhaps 26 states poised to outlaw reproductive rights. Many of these states had until 1952 legalized school segregation, and until 1964 legislated segregation in public facilities.

The abortion decision is in shocking contrast with the one striking down New York’s venerable law proscribing carry of unlicensed concealed weapons, decided by the same five justices who trashed Roe. The people who will be killed in public with more handguns on the street also have a right to life. And they are all out of the womb.

It’s staggering how the Court can celebrate giving state legislatures political control over women’s bodies the very day after the same justices took from the same legislatures the ability to protect lives from concealed weapons carried in public at the ready. Of course, the judges were quick to stress that the Second Amendment did not prevent the government from banning concealed weapons in courtrooms.

Alito said  that his decision implicates abortion and no other right. But, no one really believes him. Professor Laurence Tribe  of Harvard Law School calls Alito’s carve-out “BS.”

In a concurring opinion Justice Clarence Thomas indicated that some of these unenumerated rights; for example, contraception and marriage equality, may soon be on the chopping block. Henceforth, the Constitution is no longer an evolving “living” document; it is as dead as a doornail.

The constitutional rationale for abortion rights as elaborated in Roe and Casey is a balancing between the fundamental rights of the mother, privacy, liberty, autonomy and discrimination (men can’t get pregnant), and the rights of the unborn fetus. If the judge believes out of religious faith or moral conviction that human life begins with conception, then abortion is of course murder, and  the states may outlaw it. But if the judge accepts the science that the fetus is, at least for a time, part of the mother having no prospect of independent existence, the woman has the fundamental right to terminate her pregnancy as she would have the right to have her tonsils out. But, maybe not quite.

The Court has opened Pandora’s box. Conservative states, representing about half of the states of the U.S., are poised  to totally ban abortion. They may also be free to punish, possibly with criminal penalties, doctors, health counselors, Uber drivers, funders  and travel agents who facilitate the transportation of women to another state or to Toronto where abortion is legal.

Abortion may even be banned nationally before too long. Senate Mitch McConnell has talked about a federal law banning abortion altogether. It could become a reality as early as  2025 if you have a Republican president, a house and senate that passed the legislation and signed it into law.

The justices from Breyer to Barrett don’t want to be perceived as “partisan hacks.” Their differences, Breyer insists are philosophical, not political. This is a tough one to swallow, particularly after the abortion and gun cases. When the decision is not based in law, but deeply disputed policy, the law has failed to work for everyone; and then how can the Court fail to leave a “stench” behind?