We Need a National Emancipation Monument at Point Comfort – Where American Slavery Began, and Began to End

Public history advocate Steven T. Corneliussen publishes op-eds in Virginia newspapers and the Washington Post and speaks at history conferences about a fitting future for Virginia’s Point Comfort—site of the 1619 dawn of British North American slavery and, under the name Fort Monroe, of momentous 1861 events at the dawn of U.S. slavery’s Civil War demise. He is a retired Physics Today Online media columnist who has worked in academic history as a scholar, editor, and history-of-science program organizer. Email: SelfEmancipator@gmail.com 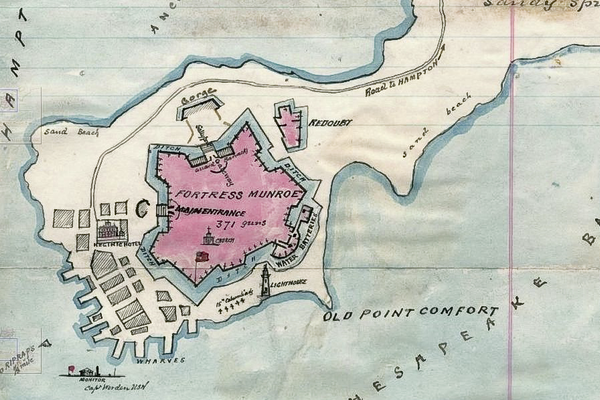 Blight directs Yale’s Gilder Lehrman Center for the Study of Slavery, Resistance, and Abolition. In a 2020 op-ed, he called for an “epic process” of replacing Confederate symbols with “memorialization of emancipation.”

For a national emancipation memorial, I propose Point Comfort, Virginia, the Chesapeake Bay sand spit later called Fort Monroe, a national historic landmark since 1960. It saw both slavery’s 1619 start and the 1861 start of emancipation’s Civil War political evolution. What it tells can appeal to all sides in the history wars: the story of the long arc of the moral universe that bent—or if you prefer, arguably bent—toward emancipation.

When New York Times Magazine deployed the 1619 Project to the history wars, the cover photo’s blurb began, “In August of 1619, a ship appeared on this horizon, near Point Comfort, a coastal port in the British colony of Virginia. It carried more than 20 enslaved Africans, who were sold to the colonists.”

In that same place in May 1861, mere weeks into the Civil War, enterprising slavery escapees Frank Baker, Shepard Mallory, and James Townsend asked for asylum at the Union army’s Fort Monroe, provoking momentous events that McPherson once called “the story of the end of slavery in America.” On a 2015 sesquicentennial panel with Blight and Ken Burns, Adam Goodheart described the momentous answer the three self-emancipators got. The fort’s commander designated them contraband of war, making the federal government their liberator—a “revolutionary change,” Goodheart declared, since always before, “U.S. authority had protected slaveholding as a constitutional right.”

Baker, Mallory, and Townsend, forerunners of 500,000 self-emancipators across the South, recognized the freedom opportunity inherent in radically new circumstances. Self-emancipators acted with historic agency—not as “the passive bystanders of conventional wisdom,” as Burns has put it, but as active agents in an “intensely personal drama of self-liberation.” McPherson saysthey “forced the issue of emancipation.”

In 2011, the army retired the citadel and surrounding post, two parts of which now constitute Fort Monroe National Monument, a form of national park. But as a candidate to serve as, or host, a national emancipation memorial, this historic landscape hides in plain sight. The country doesn’t yet generally see what increasing numbers of historians see: Black agency’s centrality in emancipation’s evolution.

McPherson wrote in 2008 that among scholars during the 1980s, a “self-emancipation thesis became dominant” for explaining that evolution—and that it “won the imprimatur of the foremost scholarly enterprise on the history of emancipation,” Ira Berlin’s Freedmen and Southern Society Project. McPherson pointed especially to Vincent Harding’s 1981 There Is a River: The Black Struggle for Freedom in America. Harding extolled the “daring, courageous activities of hundreds of thousands of black people...setting themselves free.”

In line with the thesis, Goodheart, author of 1861: The Civil War Awakening, used Fort Monroe’s 1861 Baker et al. story as the foundation for his 2011 article “How Slavery Really Ended in America.” In 2014, Henry Louis Gates Jr. declared that the three Fort Monroe freedom strivers forced “the beginning of the end of slavery” in what National Humanities Medal holder Edward L. Ayers has called “the greatest moment in American history.” Not just “a great," but “the greatest."

The proposed national emancipation memorial would address not just the country but the world. In 2020 Blight wrote that freedom “remains humanity’s most universal aspiration. How America reimagines its memorial landscape may matter to the whole world.” Manisha Sinha’s The Slave’s Cause: A History of Abolition emphasizes the “world historical actions” of the enslaved. McPherson sees Fort Monroe as a potential “world-class destination.” In 2021, UNESCO honored Fort Monroe’s place in world slavery history. It all calls to mind Chinese human-rights activist Liu Xiobao’s Nobel Prize speech assertion that “no force...can put an end to the human quest for freedom”—as seen now in Ukraine.

Deep injustice persisted long after the Civil War, but chattel slavery didn’t. Emancipation historian David Brion Davis calls slavery’s eradication “probably the greatest landmark of willed moral progress in human history.” That slavery-history judgment must appeal even to, say, as ardent a 1619 Project critic as the Wall Street Journal’s Jason L. Riley. Recently in the ultraconservative Hillsdale College publication Imprimis, which claims six million subscribers, he declared, “What makes America unique is not slavery. It’s emancipation.” A national emancipation memorial could appeal to all sides in the history wars.

A Point Comfort National Emancipation Memorial would do more. There’s something poetic in assigning a symbolizing purpose to a landscape when it already works that way literally, for national memory of both slavery’s dawn and the dawn of its demise. There’s something usefully ironic about Freedom’s Fortress being built with enslaved labor. There’s something dramatic in federal power’s first foreshadowing of emancipation, granting sanctuary to three freedom strivers, themselves forerunners of hundreds of thousands who, as Eric Foner once put it, “forced the fate of slavery onto the national political agenda.” And there’s something fitting in this historic landscape’s deep connection to the United States Army, which with some 180,000 Black Civil War soldiers fundamentally enabled emancipation in the first place.