Dr. Guy Lancaster is the editor of the online Encyclopedia of Arkansas, a project of the Central Arkansas Library System, and the author or editor of multiple books on racial violence, most recently American Atrocity: The Types of Violence in Lynching. 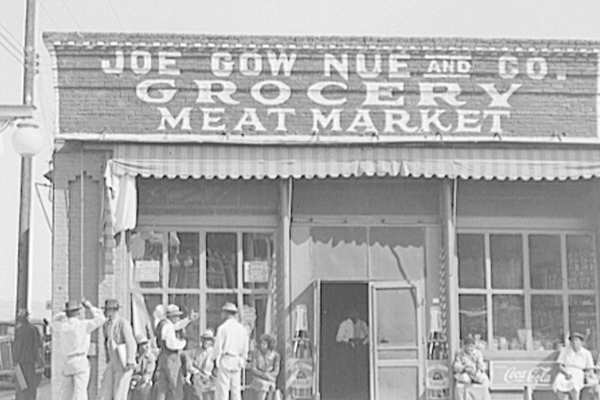 A Chinese-owned grocery in the Mississippi Delta, c. 1930s.

On Saturday, May 14, a gunman opened fire upon a grocery store in Buffalo, New York, killing ten people. As of this writing, investigators have reportedly uncovered the terrorist’s manifesto, suggesting that he was motivated to commit mass murder by a conspiracy theory popularly known as “the Great Replacement,” which holds that elites (typically depicted as Jewish) in white, European countries are overseeing the importation of immigrants to undermine the white population.

The term “Great Replacement” was popularized by a French white nationalist in his 2011 book of the same title and has since become a staple of right-wing ideology, being promoted here in the United States most feverishly by Fox News commentator Tucker Carlson. Belief in this conspiracy theory has motivated other mass killings, including the 2018 murder of eleven people at the Tree of Life synagogue in Pittsburgh, Pennsylvania, as well as the massacre of fifty-one people in Christchurch, New Zealand the following year. The growing death toll has not stopped Tucker Carlson and other Republican elites from claiming that the supposed influx of migrants is part of a master plan to undermine white America.

It is easy to imagine the “Great Replacement” is just another moral panic stoked by populist grifters to keep their adherents simmering in fear and resentment. However, if you examine the historical record, elites in this nation, and my own home state of Arkansas, have explicitly engaged in the importation of foreigners to undermine local populations—just not for the reasons conspiracy theorists prefer to imagine.

Following the Civil War, whites in the South did everything they could to bring back the lucrative system of slavery. They engaged in regimes of terrorism and violence, but they also promoted the importation of foreign labor, especially Chinese, as a means of undercutting the local Black labor market. Or as Governor Powell Clayton, a Republican, put it, Democratic politicians and local landowners aimed to “punish the negro for having abandoned the control of his master,” for having begun to demand fair wages and tolerable working conditions. Planters dreamed that allegedly submissive, non-citizen Chinese labor would be easier to control, but the Chinese found the slave-like conditions these planters tried to impose intolerable and cut their contracts short or moved into other lines of work, which is why the Arkansas Delta has a number of multi-generational Chinese-run grocery stores and restaurants.

In the late nineteenth century, Austin Corbin, president of the company that oversaw Sunnyside Plantation in Chicot County along the Mississippi River, recruited Italian laborers to work on the plantation with contracts obligating men to work the land for twenty-two years before finally being allowed to own it. There was no shortage of labor in Arkansas at the time, but Chicot County was majority Black, and, again, plantation owners were hoping to find a source of cheap labor devoid of citizenship rights. But the Italians had no experience with cotton, and many died from malaria. The survivors by and large moved elsewhere, most notably to Tontitown, in the northwestern corner of the state.

During World War II, plantation owners again began to dream of cheap, disposable, foreign labor, but this time the federal government came to their aid. To ensure sufficient labor to meet wartime demand for agricultural crops, the United States and Mexico created the Bracero Program, which supplied American landowners with Mexican workers on fixed-period contracts at a time when many men of laboring age were engaging in military service. The program has often been depicted as a matter of wartime necessity, but in his chapter in the recent book Race, Labor, and Violence in the Delta, historian Michael Pierce of the University of Arkansas examines the career of Lincoln County activist Ethel Dawson to argue that “there was no shortage of African Americans willing to work the Arkansas Delta’s cotton fields, and planters employed braceros to lower domestic wages, stifle worker protests, rid Lincoln County of Black people they had long considered dangerous, and maintain near absolute power at a time when pressure to end Jim Crow was building.”

This anti-Black “Great Replacement” continues to the present day. When I was down in Phillips County in the runup to the 2019 centennial of the Elaine Massacre, I heard many stories about local planters who would not hire men or women from the area to work on their farms but, instead, recruited foreign labor, especially from South Africa. On November 12, 2021, the New York Times reported on that exact thing happening just across the river in Mississippi, revealing how residents were losing their jobs to foreigners brought to the country on H-2A guest worker visas.

The “Great Replacement” is real. But it has never been about the recruiting of foreigners to undermine white workers. Instead, it has always, in this country, centered upon the recruitment of foreigners to undermine Black labor, and thus Black economic and political aspirations. Not that Tucker Carlson or any of his brother blood-soaked millionaire elites will ever admit that.