Anya Jabour is Regents Professor of History at the University of Montana, where she teaches U.S. women's history and directs the public history program. The author, most recently, of Sophonisba Breckinridge: Championing Women's Activism in Modern America, she is currently working on a biography of prison reformer and sex researcher Katharine Bement Davis (1860-1935), whose sisters Helen and Charlotte were members of the "Perfect Little Ladies." 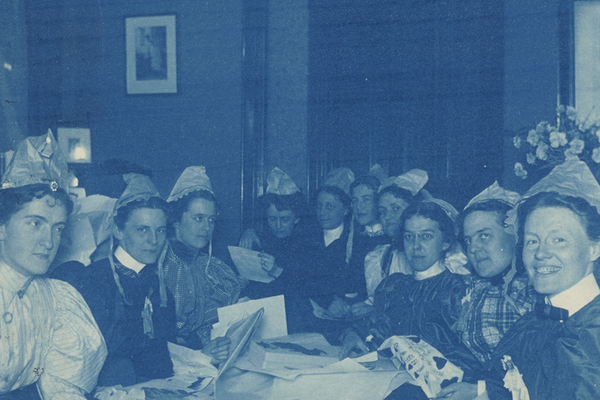 In contemporary America, Valentine’s Day is a commercialized celebration of heterosexual romance. Advertisements offer ceaseless reminders to clueless men to “surprise” the women in their lives with chocolates, roses, or even diamonds. Romantic movies endlessly repeat hackneyed plotlines featuring seemingly successful single women longing for a man’s marriage proposal to complete their otherwise “meaningless” lives. Mass-produced cards and “conversation hearts” encourage Americans of all ages to express their affection for members of the opposite sex through pre-printed sayings.

Because of popular culture’s relentless emphasis on heterosexual couples, for single and LGBTIQ+ people, Valentine’s Day often seems more shameful than celebratory, although both queer folks and single women have attempted to reclaim the holiday. But it wasn’t always this way. Rather, as my research on one group of female friends in the Victorian era suggests, Valentine’s Day used to be celebrated very differently. Indeed, more than a century before the character of Leslie Knope on Parks and Recreation proposed the idea of “Galentine’s Day,” Victorian women celebrated female friendship on Valentine’s Day.

In the 1890s, a group of young, single, professional women in Rochester, New York, formed a social club they dubbed “The Twelve Perfect Little Ladies.” The club’s members—all white, well-to-do women—hosted costume dances and dinners, played cards, staged theatrical entertainments, wrote poems and songs, and celebrated holidays and anniversaries. “The Perfects,” as they called themselves, defied conventional definitions of proper femininity by avoiding marriage and motherhood and instead pursuing higher education and professional careers. Instead of prioritizing feminine propriety and family duties, they emphasized female companionship and fun activities.

Fin-de-siècle America was a golden age for female friendship. Between 1880 and 1920, primarily white and well-to-do “New Women” enjoyed increased opportunities for higher education and professional careers, as well as greater personal independence and freedom of movement, symbolized by their abandonment of the corset and their adoption of the bicycle. While nineteenth-century women also had cherished same-sex relationships, New Women were able to enjoy such relationships during an extended—often permanent—stage of life as single, self-supporting women. For the Perfects, female friendship offered close companionship among kindred spirits who prized women’s independence and creativity. The “Perfect Little Ladies” exemplified the possibilities of female friendship in fin-de-siècle America.

The Perfects were not an official women’s organization. They would be invisible in the historical record except for the materials kept by May Bragdon, an avid diarist and an amateur photographer. Her diaries and photographs, spanning nearly two decades, record the activities of the Perfects in loving—and lavish—detail. From 1896, when the group originated, to 1914, when her digitized diaries cease, she included more than 200 mentions of the Perfects. The items she clipped to the pages of her diaries—photos, poems, and other mementos—also vividly reveal the dynamics of this group of female friends.

The Perfects evolved out of a group of friends who met regularly to play cards. Perfects membership changed over time, although a core group persisted for nearly two decades. As a group, the Perfects were well educated. Most had completed high school, and several had completed college. Self-supporting professionals who worked as teachers, salesclerks, office workers, and artists, the majority of the Perfects remained single for life, preferring the company of other women to marriage and motherhood. As Perfects president Mabel Rogers declared: “No men need apply.”

The Perfects met regularly once or twice a month to share a special meal and play cards. In addition to their regular gatherings, the Perfects hosted elaborate parties for their annual “reunions” and for major holidays. One such special occasion—Valentine’s Day—showcased the importance of same-sex relationships in Victorian America.

For the Perfects’ first celebration of Valentine’s Day, in 1897, May Bragdon was the hostess. Prior to the party, she and fellow member Charlotte Davis got together to discuss “funny ideas for valentines,” and May spent an entire day constructing home-made cards. On the day of the party, she “hustled around getting things ready for the party.”

I had paper caps - concealed behind 12 cute little paper dolls - labeled ‘Perfect Little Ladies - Take one’ Then I had heart-shaped score cards &c. &c.  . . About quarter of ten we had supper - coffee, two kinds of cake - olives & pickles & 3 kinds of sandwiches - turkey - lettuce & cream cheese with nuts - heart shaped . . . Then we put the basket full of valentines on the table & sorted them out - so many - and then went into the sitting room & sat on the floor to open them and laughed. They were so funny.”

While on this occasion May did not preserve the Valentine cards in her diary, other examples of the genre from later gatherings suggest that these were humorous verses, tailored to each member and often decorated with hand-drawn caricatures. In 1902, for example, May drew Edith Joiner “sitting on a pile of books very forbidding,” accompanied with the query: “Tell me pretty maiden are there any more at home like you?” For Mary MacArthur, she drew “a pretty Gibson girl in a bathing suit,” with the verse: “A maid I know stood gazing at the ocean. She shook her head and sadly said I do not like the motion.” For Charlotte Davis, she used “a lovely white Maxfield-Parrish-Castle-in-Spain with a blue sky,” with the sentiment: “Here’s a lovely country I’ve formed for you my Chat./ It isn’t very cold and it isn’t very hot./ Its landscapes and its sky-scapes w[oul]d suit you thro’ and thro’/ for they’re all a lovely white or else a lovely blue,/ and everyone who lives there is wise and fair and fine./ Oh won’t you go there sometime with your own Valentine?” All the Perfects oohed and aahed over their Valentines, and “Chattie said she was going to have it framed!”

For those who regard Valentine’s Day with trepidation, these women’s celebrations of female friendship provide a meaningful model for honoring love in all its forms. The “Perfect Little Ladies” turned to one another for fun and friendship. Their “Perfect” Valentine’s Day rituals, characterized by creativity and companionship, offer an appealing alternative to commercialized celebrations of compulsory heterosexual coupledom.