The Catholic Catechism, Abortion, and the Supreme Court 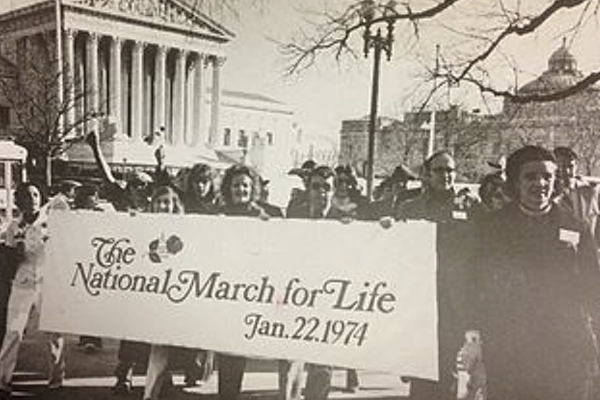 In the current edition of the Catechism of the Catholic Church, the first word listed in the index is abortion. The two-page section on abortion begins with the statement: “Human life must be respected and protected absolutely from the moment of conception. From the moment of his existence, a human must be recognized as having the rights of a person—among which is the inviolable right of every innocent being to life.”

The catechism characterizes the “moment of conception” as an “existence” that is “human” and automatically endowed with “the rights of a person”—even though for the first twelve hours after conception all is but a single cell. There is no Bible verse for this interpretation, but of course the Catholic Church sees itself as the living institution that issued the Bible and so therefore has the right to issue extrabiblical pronouncements concerning matters of faith.

Interestingly, the Catholic catechism’s commentary on abortion does not use the term “unborn.” In the gospel of John, in one of the most famous teachings of Jesus of Nazareth, the term “born again” is used and it links birth with life. In that passage, Jesus tells the rabbi Nicodemus, “What is born of the flesh is flesh, and what is born of the Spirit is spirit.” Here the words of Christ imply that the unborn is not yet flesh, in other words not life. Also, this passage uses birth as a metaphor for becoming a Christian, but nowhere does it suggest that one is already a Christian prior to their spiritual “birth.”

For a biblical rationale, the catechism quotes from Psalm 139. However, this is problematic since the passage is poetry, which involves metaphorical language. Two verses are offered: “Before I formed you in the womb I knew you, and before you were born I consecrated you” (God speaking) and “My frame was not hidden from you, when I was being made in secret, intricately wrought from the depths of the earth” (the psalmist speaking). Those statements are hardly biblical proof that the fetus/embryo is of personhood status. Rather, it would be more accurate to read those wafts of verse as statements on destiny (specifically King David’s).

In section 2271 of the catechism there is the bold assertion, “Since the first century the Church has affirmed the moral evil of every procured abortion.” This is bold because the New Testament, written in the first century, does not offer a single verse about abortion. Considering the amount of attention abortion gets in Catholic and conservative Protestant churches, one would think there would be a lot of specific scripture underpinning the position being taken. The Apostle Paul, who wrote two thirds of the New Testament, listed many “sins” believers are to avoid, but his words give no attention to abortion.

The omission of abortion in the New Testament is compensated, however, by the Catholic catechism making use of the Didache, an extrabiblical text that should be translated as “The Teachings.” Section 2271 quotes from that document: “You shall not kill an embryo by abortion and shall not cause the newborn to perish.” Here is claimed a proof of a position dating back to the first century, even though some scholars date the Didache to the second century. Strangely, until a manuscript was found in 1873 scholars only knew about the Didache through secondhand sources. In fact, the text was rejected for inclusion in the New Testament, as some regarded it as spurious. The lack of many extant copies of the Didache suggests this text was less important in the past than the Catholic Church makes it in the present.

What is very misleading in the Catholic catechism is how immediately following that one sentence from the Didache another quote is offered from 1965! This is the same paragraph that starts out declaring that the Church’s position against abortion dates back to the first century. The 1965 block quote follows the Didache block quote. Part of this second statement reads: “Life must be protected with the utmost care from the moment of conception: abortion and infanticide are abominable crimes.” A causal reader will easily regard the 1965 statement as being part of the first century, and it seems the drafters of the catechism should have realized that might happen.

The remainder of the catechism’s section on abortion, which represents more than half of the commentary, are official Catholic statements from 1983 and 1987. Section 2273 uses the term “inalienable right”—a borrowing not from Jesus or Paul but Enlightenment philosophers!—in order to confer to the unborn full personhood status with full human rights. Yet the Enlightenment philosophers regarded rights as belonging to those who are born, as is stated by the French revolutionaries in the first sentence of The Rights of Man and Citizen: “Men are born and remain free and equal in rights.” The Catholic use of “inalienable right” is obviously a veiled attempt to subsume a faith doctrine as part of the broader human-rights movement.

Why does a lot of the commentary on abortion in the catechism date back to the 1980s? Perhaps it has to do with the culture wars. In the United States that was the decade when a larger pro-life movement was coming to the fore. In response to the 1973 Roe v. Wade US Supreme Court ruling, which prohibited states from banning abortion outright, conservative Protestants responded by becoming more politically engaged. In 1979 the Moral Majority was founded and was instrumental in the election of Ronald Reagan, who ran for president as a pro-life candidate (even though earlier as California governor he had signed into law landmark legislation making abortion legal in that state). Catholics, beginning with the founding of the National Right to Life Committee in 1968, had long dominated the pro-life movement. Maintaining that dominance was no doubt part of the reason for the many Vatican statements on abortion during the 1980s. Clearly, the Vatican sought an impact on American politics because of America’s global influence.

The pro-life position is a faith-based stance, but ironically it is derived from textual and historical ambiguity. No wonder not all Christian believers, whether Catholic or Protestant, subscribe to the narrow view that the moment of conception marks full personhood status. Judging by the many American Catholic women who have gotten abortions over the years, obviously not all Catholics believe what their catechism teaches. Judaism does not share the Catholic view about conception. Of course, the nones, the non-religious or unaffiliated, would not be natural endorsers of the Catholic view.

Soon the Supreme Court with two-thirds of the justices being Catholic will decide whether (1) a woman has the right to terminate her pregnancy, or (2) an unborn has personhood status that trumps what a woman can do with her body. If Roe v. Wade is overturned, it will be a faith-based decision. The high court might simply declare that states should decide the matter, but any ruling eliminating a constitutional right to abortion would obviously be the consequence of Catholic religious influence on the justices.