Remember the Army's Role in the Pacific War: Important Then, Influential Afterward

John C. McManus is the Curators’ Distinguished Professor of U.S. Military History at Missouri University of Science and Technology, and the author of multiple books on the American combat experience. His most recent book, Island Infernos: The U.S. Army's Pacific War Odyssey, 1944 will be released on November 9 by Dutton Caliber. 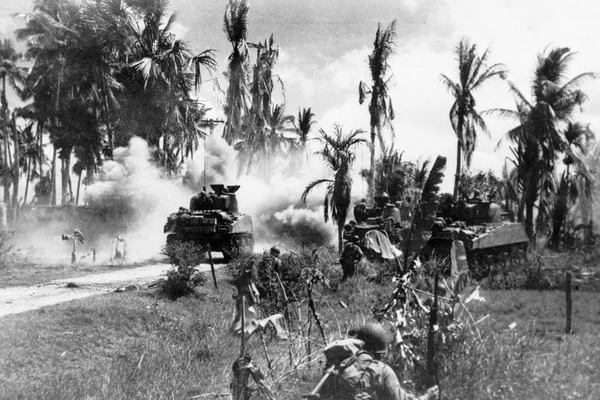 In the Pacific theater during World War II, the American land war was fought primarily by the Army, though popular memory has focused almost exclusively on the comparatively smaller Marine Corps effort. The Corps made fifteen amphibious combat landings over the course of the entire war. In the spring of 1945, Lieutenant General Robert Eichelberger’s Eighth Army alone carried out thirty-five amphibious landings over a five-week period in the Philippines. At full strength, and at its largest size ever, the Marine Corps mobilized six combat divisions, comprising about a quarter million troops in theater, all of which were fully dependent on the Navy and the Army for logistical support since the Corps was designed to function as an expeditionary fighting force, not a self-sustaining military organization. The Army deployed twenty-one infantry and airborne divisions, plus several more regimental combat teams and tank battalions whose manpower equated to three or four more divisions. In addition, the Army handled enormous logistical, transportation, intelligence, medical and engineering responsibilities, not to mention aviation, since the Air Force was part of the Army in those days.

By the summer of 1945, 1,804,408 ground soldiers were serving somewhere in the Pacific or Asia. They were part of the third largest land force ever fielded in American history, behind only the European theater armies in World Wars I and II. Though soldiers comprised the main American ground force in the war against Japan, they sometimes felt like junior partners to the more famous Marines. “Out here, mention is seldom seen of the achievements of the Army ground troops,” Major General Oscar Griswold, a corps commander, wrote from the South Pacific to a colleague in the fall of 1943, “whereas the Marines are blown up to the skies.” To a generation of Americans reared in a mass media culture and for whom the notion of recognition, or credit, for a job well done was of crucial importance, this perception could be corrosive. Paul Fussell, a keenly insightful commentator on World War II American culture, and a combat veteran of the ground war in Europe, opined that for soldiers the ultimate purpose of their dangerous efforts was often the value they ascribed to “the distant, credulous home-town audience for whom one performs by means of letterpress rather than by one’s nearby equals who know what the real criteria are. That all-important home-town audience the troops never forgot.”

With this ephemeral goal as the measuring stick of worth, the Army often came up short during the war with Japan, and certainly in posterity’s view of that war. For some this led to anger and resentment against Marines as glory hounds with an overactive publicity machine. “The Marines are so hopped up with their publicity–someone has to fight them and I’m the guy,” one junior officer huffed in a 1944 letter to his family. Another wrote wearily from Saipan, “Our men are getting awfully tired of reading about the exploits of the Marines out here. We have been able on many occasions to identify pictures of ‘Marines’ in action as being pictures of army troops. The standing joke now is that the Marines’ secret weapon is the Army.” This anger against a sister service–Marines and soldiers had much more in common than otherwise--was ultimately pointless and counterproductive. The Marine Corps comprised only five percent of the U.S. armed forces in World War II and yet Marines suffered ten percent of all American battle casualties, including over 19,000 fatalities, so the Corps more than earned its vaunted reputation for valor, a fact that most soldiers recognized. If history is to assign something like credit for the American ground victory in the Pacific/Asia theater, it properly belongs to both services, with the Army nonetheless playing a significantly larger role. By design, the Army did the vast majority of the planning, the supplying, the transporting, the engineering, the fighting and the dying to win a war whose end represented a tremendous American triumph as well as a disquieting harbinger with ominous undertones for the American future.

The unglamorous locales, from the jungles of New Guinea, Guadalcanal and Mindanao to the frozen valleys of Attu, the rocky caves of Biak and Peleliu, the ruined metropolitan blocks of Manila and Cebu City, the grassy hills of Guam and the mind-numbing ridges and peaks of Burma, carried with them a troubling whiff of clairvoyance. “This is the Pacific, WWII, all over again,” Stanley “Swede” Larsen, who served in the Second World War with the 25th Infantry Division, wrote from Vietnam in 1965 to one of his former World War II commanders. Now a general, Larsen saw “the same shortages, same malaria problems, personnel headaches, transportation bottlenecks etc. Little. . . could I have guessed exactly 20 years ago that we would go full circle and be back at the same game, in the same part of the world.”

Indeed, as Larsen indicated, the battlegrounds of the Pacific, and the war itself, hinted strongly at the patterns of succeeding history, especially for the Army which, as an institution, shaped much of that history. The fact that the Army bore the brunt of the ground fighting against Japan was by no means a singular occurrence. In fact, it was a true indicator of what was to come. Since World War II, the Army has not only done most of the ground fighting–with a strong assist from the Marine Corps–but it has done the vast majority of America’s fighting altogether. From Korea to Afghanistan, over 90 percent of American wartime casualties have been suffered by ground troops, most of whom were Army soldiers and most of whom were killed, wounded or captured somewhere in Asia. With the exception of brief expeditions in Grenada, Panama and Somalia, every subsequent war involving Army conventional forces has been fought somewhere on or near the Asian land mass. It is also worth noting that all of this happened at a time when the advent of nuclear weapons (another harbinger unleashed by the Pacific War) and enormous advances in technology were supposed to make the average ground soldier obsolete.

In the Pacific, the Army glimpsed so many more of its future challenges and trends. Examples abound. Soldiers sometimes fought as guerrilla warriors. In many instances, they mobilized local insurgents to fight the Japanese, just as Special Forces would later do in many places around the globe. In this shadow war fought largely in the Philippines and Burma, Americans often had to immerse themselves into exotic cultures, gain the trust of local leaders and think as a local, not a westerner, might. Similarly, Army soldiers, from New Caledonia to Okinawa, had to learn to develop productive relationships with a dizzying assortment of ethnic groups, tribes, and small countries, not dissimilar to the cross-cultural diplomacy of the Cold War era and the twenty first century.

Winston Churchill once famously quipped, “There is at least one thing worse than fighting with allies and that is to fight without them.” The last time the United States fought a war with no allies was in 1898 against Spain. In the Pacific, the Army fought alongside a variety of partners, most notably Australia, Britain and China. The Army’s relationship with the Australians and the British was at times surprisingly contentious, at least for such culturally similar, longstanding allies. The alliance with Chiang Kai Shek’s China stands as perhaps the most flawed and ill-fated in all of American history. The Americans, mainly through the person of Lieutenant General Joseph Stilwell, experienced the enormous frustration of latching themselves to a corrupt, repressive and maddeningly inefficient regime, one with a voracious appetite for Lend Lease support but little inclination to fight the way the Americans wanted them to against the common enemy. For the Army, China would turn into a witch’s brew of cultural misunderstandings, byzantine politics, command inspired backbiting, and willful self deception (primarily on the part of the American government and general public). It was a frightening foreshadowing of future experiences with many other defective, and corruptive, American alliances, most notably the partnerships with South Vietnam and Afghanistan.

So, given the seminal importance of the Pacific War and the crucial role the Army played in fighting it, why does the Army’s leading role remain so overlooked and relatively obscure all these decades later? Why is the World War II Army known much better for helping take down Hitler rather than Hirohito? Cole Kingseed once argued persuasively that five factors contributed to the greater prominence of the Army’s war in Europe over the Pacific: the Germany-first strategy that dictated Allied priority of resources and thus the entire course of World War II; the maritime nature of the Pacific struggle, leading historians to a naval-dominated narrative; the cult of personality surrounding General Douglas MacArthur who, by his own design, absorbed almost all accolades to himself rather than to the soldiers who did the real fighting; unbalanced press coverage by correspondents who found Europe a far easier, and more hospitable, place from which to report than the wilds of the Pacific; and the troubling racial savagery that characterized the war from start to finish. I believe there were two other factors as well. The chaotic and tragic debacles of multiple early Allied defeats undoubtedly contributed to this obscurity. After all, Americans never suffered any defeat at the hands of the Germans to equate with the Japanese conquest of the Philippines in 1942. Moreover, the brutal, unfettered manner in which both sides fought the Pacific/Asia war hardly lends itself to a popular good versus evil narrative of the sort to capture posterity’s imagination, though unquestionably the United States attempted to adhere to some semblance of humane war-making far more than did its adversary. Perhaps when we look back at the Pacific War, and the unglamorous battles the Army fought over an area that spanned nearly one-third of the earth’s surface, we are actually looking into a mirror of sorts and, in that mirror we see ourselves a little too clearly, maybe even too close for our ultimate comfort.