We are All Becoming Cassandras: Leaders Must Heed the People on Climate, Disarmament, and Pandemic 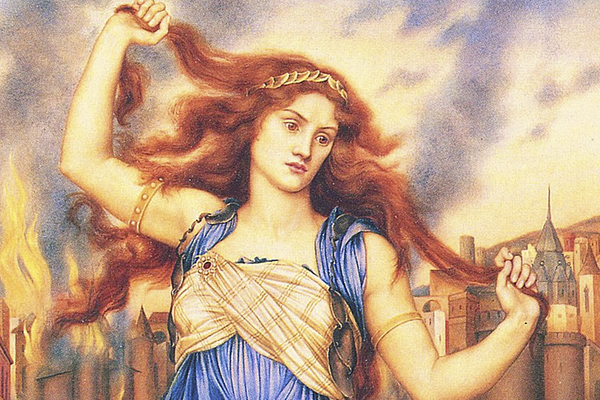 In ancient Greek mythology, Cassandra was a priestess who was able to predict the future but unable to convince others to act upon her prophecies.

The fate of Cassandra seems particularly relevant today, for there has been ample warning about three developments that threaten continued human existence—preparations for nuclear war, climate change, and disease pandemics—without, however, adequate measures being taken to safeguard human survival.

Ever since the atomic bombing of Japan in 1945, prophetic voices have warned of doom if the world does not ban nuclear weapons.  And yet, the nine nuclear powers are currently engaged in a new nuclear arms race to build ever faster, more devastating weapons that, if used, will annihilate nearly all life on earth.

About three decades ago, climate change also became a major public issue, with scientists, politicians, and environmental organizations issuing prophetic statements about the extreme dangers ahead.  Today, following a remarkable display of inaction, massive wildfires and floods sweep across nations, the polar ice caps are melting, sea levels are rising, and millions of climate refugees are fleeing for their lives.

More recently, specialists have warned of the outbreak of new, highly contagious and potentially deadly diseases around the globe.  And the result?  Thanks to the failure of governments to implement the necessary public health measures, a COVID-19 pandemic has already produced over 222 million cases and 4.6 million deaths, with no end in sight.

Curiously, though, there is a major difference between the Cassandra of the Greek myths and her modern counterparts.  In the myths, Cassandra was ineffective because she was simply not believed.  By contrast, most people do believe our modern Cassandras and want action taken to avert catastrophe.

When it comes to nuclear weapons, polls have repeatedly shown that most people favor eliminating them.  A 2008 public opinion survey in 21 nations worldwide found that large majorities in nearly all the nations supported the total abolition of nuclear weapons.  Recently, public opinion surveys in Europe, Japan, and Australia reported similar results.

Substantial majorities of people polled around the world also feel seriously endangered by climate change.  A 2018 Pew Research Center survey of people in 26 nations in North America, South America, Europe, Asia, the Middle East, and Africa found that a median of 68 percent regarded climate change as a “major threat,” 20 percent as a “minor threat,” and only 9 percent as “not a threat.”  In early 2021, the UN Development Program announced the results of the “People’s Climate Vote” that covered 50 nations with over half the world’s population.  The program’s administrator declared that they “clearly illustrate that urgent climate action has broad support amongst people around the globe.”

The COVID-19 pandemic also sparked an exceptionally strong demand for remedial action.  In late February 2021, an Ipsos survey of people in 15 nations found overwhelming numbers intending to be vaccinated in a variety of nations,  including Brazil (89 percent), Italy (85 percent), China (82 percent), Spain (82 percent), Mexico (80 percent), South Korea (80 percent), Canada (79 percent), Australia (78 percent), and Japan (74 percent).  Although rightwing politicians in the United States downplayed the seriousness of the epidemic and railed against vaccines and other public health measures, recent polls have found that 64 percent of Americans approve of mandatory vaccinations for everyone in the United States and that same percentage backs mask mandates for all public places

Even so, governments have not taken adequate action to stave off the catastrophes of nuclear war, climate change, and disease pandemics.  Why?

One key factor is the control of public policy by self-interested economic forces.  Seeking lucrative military contracts from the U.S. government, giant corporations campaign relentlessly for the building of new nuclear weapons.  In 2020, the major nuclear weapons contractors in the United States employed 380 lobbyists and spent $60 million on lobbying, with great success.  This expenditure, of course, does not include their lavish campaign contributions to friendly politicians.

Nor should we forget the immense role that wealthy fossil fuel corporations have played in sabotaging action to avert climate catastrophe.  Although ExxonMobil and other oil companies knew decades ago about what their products were doing to the environment, they funded a massive misinformation campaign designed to deny the findings of climate science, subvert public opinion, and block international treaties that could curb greenhouse gas emissions.  Thus far, they have been very successful.

As for the giant pharmaceutical companies, they treat the COVID-10 pandemic as an opportunity to reap vast profits.  Public health, of course, is dependent upon the worldwide distribution of antiviral vaccines as quickly as possible.  But the corporations manufacturing the vaccines, determined to maximize their income, refuse to waive their patent rights, thus preventing other companies or governments from producing or distributing the vaccine and, thereby, competing with them.  In this situation of scarcity, they sell the vaccines to the highest bidders among governments—overwhelmingly those of the richest nations.  Consequently, as of August 30, 2021, 57 percent of people in high-income countries had received at least one dose of the vaccine, while only 2 percent had received it in low-income nations.

A second key factor behind the inadequate response to these crises is the absence of a system of global governance.  Even when the baneful influence of powerful corporate entities is overcome, on occasion, in individual nations, there is no structure that can take remedial action on a global basis.  The closest the world has come to that structure is the United Nations.  But, if the United Nations is to meet the challenges posed by these existential crises, it needs substantial strengthening of its authority and resources.

Consequently, until corporate influence is curbed and the United Nations strengthened, our modern Cassandras’ warnings seem likely to go unheeded.