Untold Stories from the Largest Boat Lift in History

Jessica DuLong is a Brooklyn-based author, editor, and collaborator/coach who helps writers develop a wide array of narrative nonfiction books. SAVED AT THE SEAWALL: Stories from the September 11 Boat Lift is the definitive history of the largest ever waterborne evacuation. MY RIVER CHRONICLES: Rediscovering the Work that Built America won the 2010 American Society of Journalists and Authors Outstanding Book Award for memoir. A USCG-licensed marine engineer, DuLong served aboard retired 1931 NYC fireboat John J. Harvey for two decades, 11 years as chief. 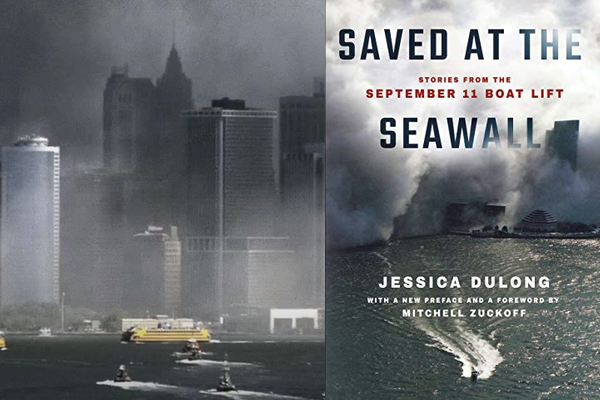 As we approach the 20th anniversary of the terrorist attacks on September 11, 2001, we might think that we’ve heard all we need to (and then some) about that day. In a nation consumed with mourning more than 650,000 people due to the continuing COVID-19 pandemic, what does it mean to remember the outpouring of unity and grief that followed the murder of close to 3,000 after passenger-filled planes were piloted as missiles?

Innumerable accounts have combed the depths of the grief, shock, anger, and resilience of that day. They chronicle epic heroism and tiny acts of kindness. But “9/11 fatigue” does a disservice to history. Beyond the jingoistic rhetoric, the market-driven spectacle, the bumper-sticker sloganization of memory, the printed tourist guides and Twin Towers tchotchkes for sale around the site perimeter, lie essential, inspiring, and instructive stories about basic human goodness and the power of collective action. Episodes of pragmatism, resourcefulness, and compassion. Moments of grace and solicitude. Lifesaving efforts born of professional honor. The joining of unlikely hands.

Still, remarkably, some of the most affecting of these stories have gone unheard.

Here’s just one. On the morning of September 11, telecom specialist Rich Varela was working a contract gig on the twelfth floor of 1 World Financial Center, directly across the street from the South Tower. A few minutes into his workday, he looked around the windowless, nearly soundproof “comp data” room humming with servers, telephone switchboards, and other electronics, and noticed that things seemed oddly quiet. There must be a late bell today, he reasoned.

About 15 minutes after he’d sat down at his desk, a “crazy, ridiculous rumble” erupted, and the building did a little shimmy. Maybe it was one of those big 18-wheelers, thought Varela, picturing the thunder created when a large truck rolls over metal plates in the street. He gave a passing thought to his surroundings. If that had been an explosion, from a blown gas line or something, nobody would even know I was in here.

A few minutes later, his buddy called from Jersey. “Get outta there! They’re crashing planes into the World Trade Center!”

Because his friend had a history as a prankster, Varela didn’t buy his story right away. “No, I’m serious,” the friend said. And then it clicked. That rumbling sound. Varela gathered his things, neither panicked nor dawdling. He opened the thick door of the comp room that had shielded him from the screeching and strobes of the building’s fire alarm. Down the hall, phone receivers dangled off corkscrewed cords, papers lay strewn across worktables, and chairs loitered at odd angles rather than nestling neatly under their desks. The trading floor was wholly uninhabited. “It was like people just evaporated.”

In the lobby, Varela caught his first glimpse of what looked to him like Armageddon. The whole front of 1 World Financial Center had imploded, leaving the plate glass window in shards. Amid piles of smashed concrete and polished stone, pockets of flame feasted on combustibles. Varela stared at the blazing hole in the side of the South Tower. “You could hear a pin drop. You’re in Lower Manhattan. You could hear sirens in the distance but immediately in the area there was no motion of life. I thought that was so eerie.”

Outside, a series of artillery-like blasts made him duck for cover. The eruptions sounded like “cannon fire or missiles coming into Manhattan.” Boom! Boom! Are there battleships out in the water shooting planes out of the sky? Varela wondered. Turning to face the towers, he realized he was hearing the sounds of bodies hitting the ground. He tried to shake off the images as he headed toward the Hudson.

Halfway to the river, still reeling, Varela heard a rumbling. The South Tower was imploding. He tried to outrun the plume of ash, dust, and smoke that barreled toward him. At the seawall, Varela spotted a boat.

On September 11, 2001, nearly half a million civilians caught in an act of war on Manhattan escaped by water when mariners conducted a spontaneous rescue. This was the largest waterborne evacuation in history—more massive than the famous World War II rescue of troops pinned by Hitler’s armies against the coast in Dunkirk, France. In 1940, hundreds of naval vessels and civilian boats rallied to rescue 338,000 British and Allied soldiers over the course of nine days. But on that Tuesday in 2001, approximately 800 mariners helped evacuate between 400,000 and 500,000 people within nine hours. The speed, spontaneity, and success of this effort was unprecedented.

Somehow, in the sea of reporting that followed the attacks, this fact has garnered remarkably little attention. I wrote Saved at the Seawall: Stories from the September 11 Boat Lift to address that omission.

Within minutes after thick, gray smoke began spilling through the airplane-shaped hole in the World Trade Center’s north tower, adults and children—some burned and bleeding, some covered with debris—had fled to the water’s edge, running until they ran out of land. Never was it clearer that Manhattan is an island. Mariners raced to meet them, white wakes zigzagging across the harbor. Hours before the Coast Guard’s call for “all available boats” crackled out over marine radios, ferries, tugs, dinner boats, sailing yachts, and other vessels had begun converging along Manhattan’s shores.

So many people ached to contribute something that day and the days that followed. They donated blood, bagged up stacks of peanut butter and jelly sandwiches, built stretchers that went unused. But, as fate would have it, mariners who had skills and apparatus that could help right away became first responders. Their collaborative efforts that morning saved countless lives. So did other selfless acts made by people from all walks of life. Varela is just one shining example.

As the debris cloud rained down on him, Varela bounded over the steel railing separating the water from the land and leapt onto the bow of fireboat John D. McKean. He felt his leg buckle and almost snap when he hit the deck. A mass of people jumped on after him, falling onto the deck, some landing on him, and the boat rocked under the weight of the leaping hoards. Varela worried it might capsize. He stumbled over people on his way to the far side of the deck, away from the avalanche, then curled in on himself, choking as everything went black.

When the air cleared a bit, Varela saw casualties all around him. Somebody was nursing a broken leg. A woman lay splayed out beside the bow pipe. It looked as if she had landed face-first on the steel deck. He hollered to a nearby firefighter that she needed medical attention—that she was unconscious and might already be dead. There was little anyone could do on the boat, so reaching a triage center, quickly, was imperative. But other lives needed saving, and people continued to clamber aboard.

Quickly, Varela made his first choice of many that day to help others. Coughing and gagging, he yanked off his gray-green long-sleeved cotton shirt, tore off a strip, and wet it with water he found dribbling from some leaky hose on deck. He tied the makeshift filter around his face and then tore off more strips for fellow passengers.

Soon, the fireboat McKean would evacuate people to safety at a rundown pier in Jersey City. Before that, though, Varela helped heave up a docking line used to rescue a young woman from the water. While there on the Jersey side, he helped carry a chair to transport a man with a shattered leg off the boat.

Then, just as the fireboat crew prepared to cast off lines, the second tower collapsed. Varela saw the looks on the faces of the fireboat’s crew as 1 World Trade Center pancaked down, burying their fellow firefighters along with the civilians they’d been sent to save.

Their horror prompted Varela to make the decision of a lifetime. “‘I’m coming with you,” he said. “You guys need help.”

“Let’s go,” came the reply, and Varela jumped back on board. So did an older gentleman, explaining, “My son’s in that building.”

“It really felt like, I might die today,” Varela later said. “And I was okay with it.” These guys need help, he thought. And that was it.

So many people that day made choices to take risky action for the sake of others: Firefighters climbing the stairwells, co-workers helping those less mobile to escape the burning buildings, office workers in dress shirts hauling equipment with rescue workers in the plaza, and mariners who dropped evacuees at safer shores, over and over, then set course straight back to the island on fire to save still more people trapped at the seawall.

Surfacing these long-overlooked stories grants us a window onto who we have been for one another and who we can be again. Remembering that this, too, is part of our heritage can help us reclaim our humanity as we face the perils of today.