The Generosity of James Loewen

Guy Lancaster is author or editor of several books on racial violence, including the recently released American Atrocity: The Types of Violence in Lynching. 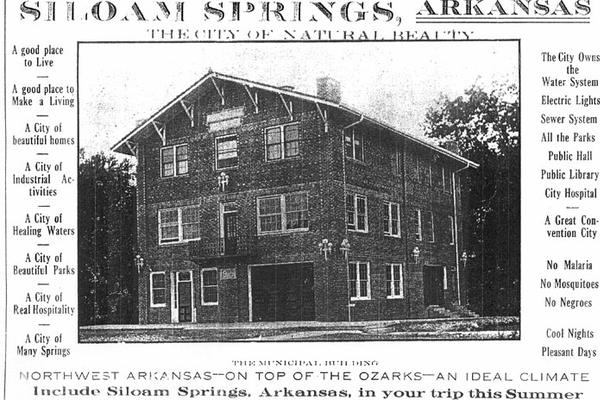 This real estate advertisement, touting "No Malaria, No Mosquitoes, No Negroes," was one of many James Loewen discovered in Arkansas while writing an entry on "Sundown Towns" for the Online Encyclopedia of Arkansas, an entry that still informs Arkansans about their state's history.

One of the things I quickly learned working as an editor at the online Encyclopedia of Arkansas, a project of the Central Arkansas Library System, is that some scholars simply do not consider writing encyclopedia entries a valuable use of their time. Writing encyclopedia entries either does not count sufficiently toward tenure or simply does not pay enough. Granted, there are plenty of exceptions, and numerous examples of generosity out there, but to edit an encyclopedia is to face regular rejection by many of the leaders in their particular fields. I learned that as a graduate student serving as an editorial assistant on Dr. William M. Clements’s The Greenwood Encyclopedia of World Folklore and Folklife, and the experience carried over into this new position.

So it was a surprise to find, one day in early 2006, a message from the nationally renowned Dr. James W. Loewen in my inbox, and an even greater surprise to see that he was offering to write an entry on sundown towns for the Encyclopedia of Arkansas, which had not yet even gone live. Of course, we eagerly agreed, and we made sure his entry was ready to go by the time we formally launched the site on May 2 of that year. Later that summer, Dr. Loewen actually came to our state to speak at Arkansas Governor’s School, and while he was in the area, he dropped by our library to chat with us and see if our archives contained anything relevant to sundown towns. Sure, he could be a bit brusque, but he was deadly earnest in his desire find and expose these manifestations of American racism that had, for so long, gone unnoticed and unexplored by most scholars.

As it happened, I had taken a leave of absence from my Ph.D. program in 2005 to assume my job at the Encyclopedia of Arkansas, and I would soon be returning to my classwork and contemplating a dissertation topic. Talking with Jim, as I would come to know him, got the gears turning in my head, and I emailed him a few days later to see if he thought there was enough material left uncovered to warrant additional research on sundown towns in Arkansas. “Of course!” he responded. “I wish you had talked to me about this while I was there!”

Over the coming years, we would regularly correspond as I pursued this subject, and he even gave me his home phone number in case I needed it. The night before I defended my dissertation in 2010, we had a long conversation that was equal parts encouragement and equal parts him putting me through my paces. A few years later, I turned my dissertation into the book Racial Cleansing in Arkansas, 1883–1924: Politics, Land, Labor, and Criminality.

After that, I must admit, I lost touch with Jim for a while as I pursued research into other aspects of Arkansas history. But he got back in touch after I started writing articles for the History News Network (he particularly liked my piece “The Garbage Troop”). We would catch each other up on our latest projects, and he was always complementary toward our efforts in Arkansas to account for this state’s history of racial cleansings and lynchings.

I am reminded of Jim’s generosity every time I look at the analytics for the Encyclopedia of Arkansas, for his entry tops our most visited webpages by a large margin. Just yesterday, I took a glance at our real-time numbers to find that, of the ninety-or-so people on the Encyclopedia of Arkansas at that moment, fully one-third of them were reading about sundown towns. I think it would have pleased him mightily to know that.