Susan H. Kamei is Lecturer in History and Managing Director of the Spatial Sciences Institute in the Dornsife College of Letters, Arts and Sciences at the University of Southern California.

Imagine being forced from your home by the government, being imprisoned in a detention camp under armed guards and behind barbed wire – and then being required to join the military to fight for the nation that had locked up you and your family.

That’s what happened in a little-known chapter of U.S. history, in which many of those men went on to become American military heroes, some making the ultimate sacrifice. These soldiers, along with all other Japanese Americans who served in the U.S. armed forces during World War II, are being honored with a new U.S. Postal Service stamp on June 3, 2021.

From the time the first immigrants had arrived from Japan in the 1880s, people of Japanese ancestry in the U.S. – whether they were American citizens or not – faced decades of discrimination. The inequities stemmed from politicians promoting anti-immigrant sentiments, workers and businesses fearing economic competition, and tensions relating to Japan’s rise as a military power. The attack on Pearl Harbor whipped those prejudices into a frenzy of fear that swept the nation. After Dec. 7, 1941, anyone with a Japanese face, especially on the West Coast, had the face of the enemy.

A little more than two months later, on Feb. 19, 1942, President Franklin D. Roosevelt issued Executive Order 9066, authorizing the forcible removal of about 120,000 people of Japanese ancestry from California, Oregon, Washington and parts of Arizona. Without any evidence of disloyalty or charges brought against them, these people – including my grandparents, parents and their families – were sent at gunpoint to hastily constructed detention facilities in desolate inland locations, where they spent the duration of the war.

Two-thirds of those incarcerated were “Nisei” – American citizens, born in the U.S. to Japanese immigrant parents. Their first-generation parents, called “Issei,” were barred by federal law from becoming citizens. Lacking any political clout or any effective allies, the community was powerless to fight against removal and imprisonment.

My forthcoming book, “When Can We Go Back to America? Voices of Japanese American Incarceration during World War II,” chronicles the stories of many who experienced this travesty of justice simply because of their race. I also tell of the roughly 33,000 Japanese Americans who served gallantly in the U.S. military during the war, fighting for a country that had unconstitutionally wronged them, their families and friends. 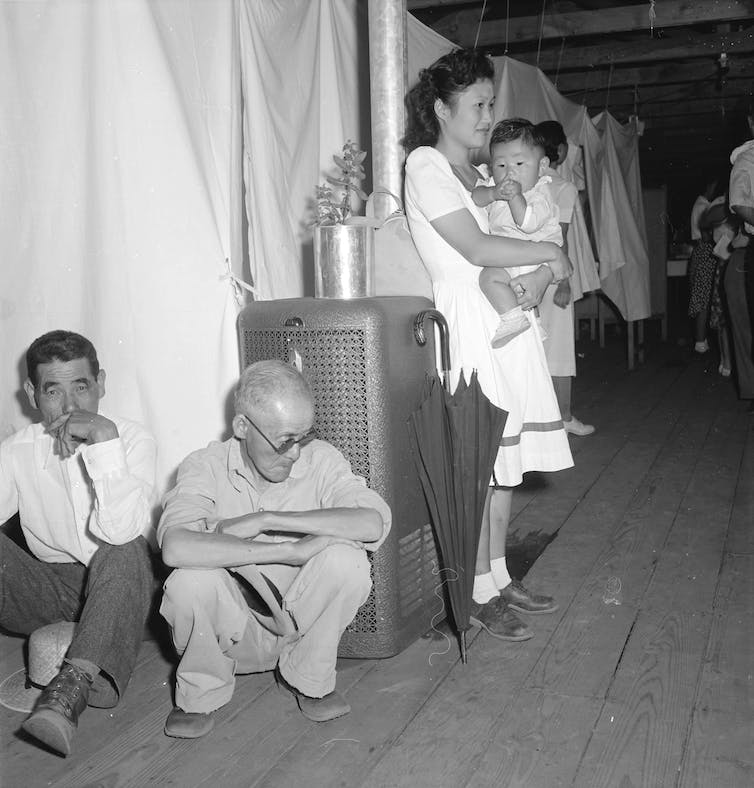 On Jan. 5, 1942, the War Department reclassified Japanese American men from being draft-eligible to “enemy aliens” not eligible for the draft. Yet as the war continued into 1943, the U.S. government put out a call seeking Japanese American volunteers to join the army. Thousands of them rushed to sign up, agreeing to serve in a segregated all-Nisei unit under the command of white officers.

Most of these volunteers were from Hawaii, where the Japanese American population had generally been allowed to stay in their homes. Future U.S. Sen. Daniel K. Inouye, then a college student, was among the first to enlist.

On the mainland, about 1,500 Nisei men volunteered from the 10 euphemistically named “relocation centers.” Of these, 805 were accepted into service, having satisfied a loyalty test administered only to incarcerated Nisei. Some used their Japanese language skills in the Military Intelligence Service in the Pacific theater, while others formed the 100th Infantry Battalion, which fought in Europe, including as a unit attached to the Nisei-staffed 442nd Regimental Combat Team. 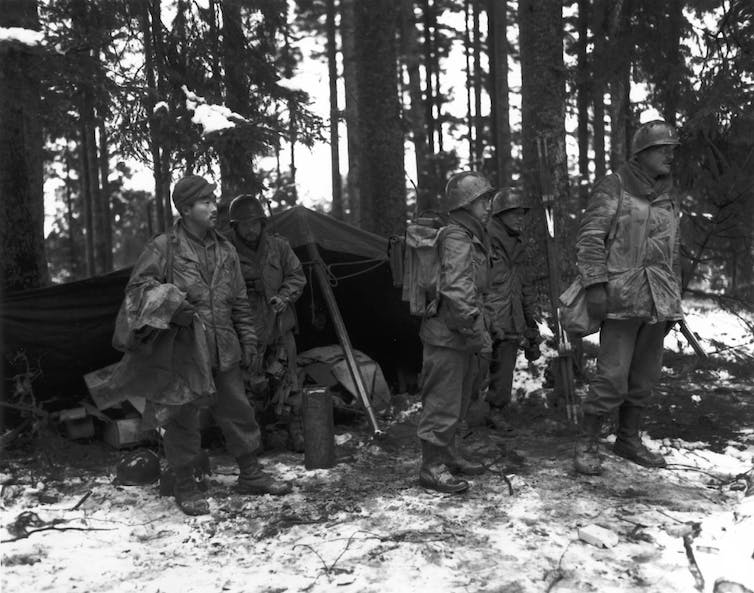 By the end of 1943, U.S. military leaders had grimly realized they were running short of manpower. The political decision to reclassify the Nisei as ineligible for the draft was being reconsidered, as commanders were hearing impressive reports of Nisei volunteers in their training. Mike Masaoka of the Japanese American Citizens League was also lobbying the military brass for the opportunity to show through a “demonstration in blood” that Japanese Americans were loyal Americans.

On Jan. 20, 1944, Secretary of War Henry Stimson announced the reinstatement of the draft for all Nisei men. Young Japanese American men were now considered loyal enough for compulsory military service. These draftees from the detention camps subsequently fought in some of the bloodiest battles in Europe.

The Nisei soldiers shared a spirit, and a motto, of “Go for Broke,” Hawaiian gambling slang for wagering everything on one roll of the dice. They wanted to give it all to defend their country and prove their patriotism.

The Japanese American soldiers helped drive the German army out of Italy and continued into eastern France, fighting nonstop for nearly two months in the Vosges Mountains. Their last-ditch effort rescued over 200 soldiers from Texas, who had been stranded behind German lines for nearly a week.

By the time the Nisei troops emerged from the Vosges, the number of dead and wounded outnumbered the living. One company had started out with 185 men, but ended up with only eight. This terrible casualty rate earned the 442nd the nickname of the “Purple Heart Battalion.”

Approximately 18,000 Nisei soldiers served in the combined 100th and 442nd, and collectively they and their units earned more than 14,000 awards, making it the most decorated military unit for its size and length of service in all of U.S. military history.

One top military official in the Pacific theater credited the Nisei MIS interpreters with saving tens of thousands of American lives and shortening the war by as much as two years. 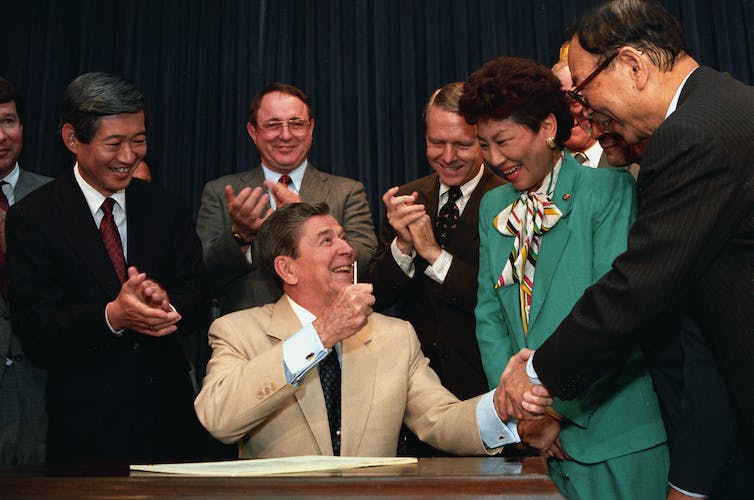 The Nisei soldiers might have prevailed over the Nazis in Europe and the Japanese in the Pacific, but they came home to racial prejudice that had only intensified during the war. In 1981, MIS veteran Mits Usui recalled that as he returned to his hometown of Los Angeles, wearing his U.S. Army uniform, a bus rider called him a “Damn J*p.” Inouye described how after he was released from the hospital as a decorated second lieutenant with a hook replacing the arm he had lost in combat, a San Francisco barber refused to cut his “J*p hair.”

Vigilantes were terrorizing the veterans’ families so they would not return to their West Coast homes. Some were threatened with bodily harm. The government promoted stories of the Nisei soldiers’ valor as part of a pro-Japanese American publicity campaign to combat the terrorism.

For U.S. Sen. Spark Matsunaga, President Ronald Reagan’s signing of the Civil Liberties Act of 1988 was important recognition of the Nisei’s wartime sacrifices. That legislation officially apologized for the incarceration and provided token reparations payments to the surviving incarcerees. A decorated 100th/442nd member, Matsunaga recalled, “We feel now that our efforts at the battlefront – giving up our lives and being wounded and maimed and disabled – all this was for a great cause, great ideals … to remove the one big blot on the Constitution that has been there for over 45 years.” 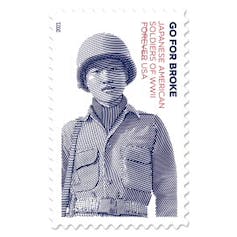 In 2005, surviving Nisei veterans and their families launched a campaign to have the U.S. Postal Service issue a stamp honoring all Japanese Americans who served in World War II, including the women who served. The campaign has had support from bipartisan local, state and federal legislators, as well as from French citizens and officials who have not forgotten the Nisei heroes who freed their towns from German forces. The stamp is one of only a few in U.S. postal history to feature an Asian American or Pacific Islander.