The Age of Reason and the Restless Masses: Censoring Class Consciousness in the Nineteenth Century

Eric Berkowitz is a writer, lawyer, and journalist. For more than 20 years, he practiced intellectual property and business litigation law in Los Angeles. Berkowitz has published widely throughout his career, and his writing has appeared in periodicals such as the New York Times, the Washington Post, The Economist, the Los Angeles Times, and LA Weekly. His previous books include Sex and Punishment and The Boundaries of Desire. He lives in San Francisco. His new book, Dangerous Ideas: A Brief History of Censorship in the West, From the Ancients to Fake News, was released this month by Beacon Press. 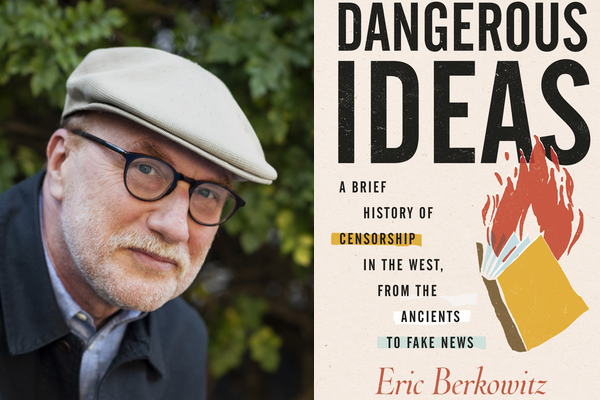 Adapted from Dangerous Ideas: A Brief History of Censorship in the West, from the Ancients to Fake News

“The barbarians that threaten society,” declared a French legislative deputy in the early 1830s, are the “[working classes] of our manufacturing towns.” In France, and throughout nineteenth-century Europe, elites were intent on choking off information that might stir the working and lower classes to demand political and social rights, which the upper orders equated with rebellion. Censorship of the press--the theatre, caricature, and soon after the century’s end, cinema—was consistently driven by the governing classes’ morbid conviction that an informed populace would become an inflamed populace and lead to their own demise.

“Four hostile newspapers are more to be feared than a thousand bayonets,” observed Napoleon Bonaparte. “If I allowed a free press, I would not be in power for another three months.”  England’s Lord Grenville warned in 1817 that the press’s “wicked and blasphemous productions” did not merely risk changes in government; they questioned “whether government should exist at all.” Two years later, Austria’s foreign minister Klemens von Metternich called the press a “scourge” and the era’s “greatest and … most urgent evil.”

Government survived, of course, and much of the censorship during this period was paranoid and ludicrous. Austria banned the word “liberté” on the sides of imported boxes of china, while Russian cookbooks could not refer to “free air” in ovens. But however overwrought were the fears of the elites, the faith among workers and their allies that a free press would solve society’s ills was equally intense. In 1842, Karl Marx extolled an unregulated press as “the ideal world, which constantly gushes from the real one and streams back to it ever richer and animated anew”—a numinous sentiment later hardened into a battle cry by the liberal German parliamentarian Georg von Bunsen: “The fight for the freedom of the press is a holy war, the holy war of the nineteenth century.” By 1849, as revolutions roiled Europe and Marx stood trial for publishing derogatory remarks about German officials, he viewed the press as a force to “undermine all the foundations of the existing political system.”

Authorities viewed church and state as codependent; an attack on one was regarded as an assault on the other. Since the French Revolution, radical politics in England and on the Continent had involved distrust of religious institutions and questioning the tenets of Christianity. In the view of a London judge in 1819, the Revolution had been a dark time when “the worship of Christ was neglected,” which resulted in “the bands of society torn asunder, and a dreadful scene of anarchy, blood, and confusion.” France had been defeated, but the specter of religion’s “neglect” in England remained wherever challenges to authority were raised. “Everything . . . in the nineteenth century,” observes the historian E. P. Thompson, “was turned into a battleground of class.”

That battleground was frequently located in courthouses. English dissenters were often accused of seditious libel—a doctrine criminalizing most criticism of government or church, whether true or not—but authorities also brought hundreds of blasphemy cases, which they viewed as an easier sell to middle-class juries. Apparently, verbal attacks on church or scripture were not considered less problematic when consumed in sumptuous surroundings than when they were aimed at the lower classes. A worker hoping for comfort in the next world, as opposed to material gains in this one, was seen as a more docile worker, and that could not change.

“The gospel is preached particularly for the poor,” the prosecutor said in an 1819 blasphemy trial, which he framed as being “for the purpose of protecting the lower and illiterate classes from having their faith sapped” and their “deference to the laws of God, and of their country” diminished. In that case, the defendant was the radical pressman Richard Carlile, and the blasphemous material was an inexpensive version of The Age of Reason, Thomas Paine’s broadside against Christianity and the Bible. Paine’s attacks on the Bible’s “lies,” “absurdities,” “atrocities,” and “contradictions” gave prosecutors much to work with. The book labeled Christians as infidels, framed Christianity as a heathen mythology, and characterized the Immaculate Conception as an “obscene” tale of a young woman “debauched by a ghost.” Religion itself was cast as a political weapon to crush the common people.

Carlile tried to demonstrate that Paine’s critiques of religion were in fact correct, but the judge stopped him: “I cannot let men be acquitted of . . . violating the law because they are unbelievers.” When Carlile tried to show inconsistencies in the Bible, the judge again refused: “You cannot go into the truth of the Christian religion. . . . You are not at liberty to do anything to question the divine origin of Christianity.”

Carlile lost the case and was sent to jail, but his goal was achieved, at least for the moment. Court rules permitted him to read the entirety of The Age of Reason while on the stand, and the law allowed the publication of court proceedings. Carlile’s wife, Jane, went into action, selling ten thousand copies of Paine’s work in the form of a trial report in a matter of weeks. More importantly, Carlile’s travails sparked widespread discussion on the meaning of freedom of the press. The question was not whether Paine’s opinions were correct, but whether Carlile should be jailed for publishing them.

A small army of supporters took up his cause, and Jane took over his Fleet Street printing shop and was jailed herself at least four times. Other supporters continued publishing the writings of Paine and Carlile; they were almost all summarily tried and convicted. So many of Carlile’s shopmen and supporters ended up in Newgate Prison with him that they launched a magazine, Newgate Monthly, which managed to remain in publication out of Carlile’s shop for two years.

“My whole and sole object, from first to last,” Carlile wrote in characteristically grandiose terms, “has been a Free Press and Free Discussion.” In the end, Carlile paid a big price for this, spending a total of about nine years in jail, impoverishing himself and his family, and sparking dozens of blasphemy prosecutions against himself and his supporters. But he obtained a good measure of satisfaction through attrition. After nearly a decade of blasphemy prosecutions against Carlile and his followers, The Age of Reason would remain in circulation.*

Further issues arose when states tried to accommodate the demands of the middle and commercial classes for materials that were off-limits to the poor. At various times, France, Germany, and Russia all exempted expensive works from prepublication censorship while imposing it on cheaper books, newspapers, and pamphlets. In Austria and Russia, a book could be banned when published individually at a low price, and permitted when sold as part of an expensive set, which happened with Tolstoy’s The Kreutzer Sonata. The author’s wife, Sonya, pleaded with the tsar to allow it to be published as part of Tolstoy’s collected works, since, as the tsar himself noted, “not everyone could afford to buy the whole set.”

At the same time, books with troublesome subject matter could be allowed if the lower classes were deemed too ignorant to grasp them. This occurred, with delicious irony, in 1867, with the book that became the seminal text of communism: Karl Marx’s Das Kapital. Russian authorities allowed it in both the original German and in translation, because it was “difficult” and “inaccessible,” its socialist message deemed buried in a “colossal mass of abstruse, somewhat obscure” arguments.

Authorities were especially alarmed by media that did not require reading—particularly theatre, drawings, and caricature—which communicated to a broader, poorer audience than printed text did and carried a more powerful, visceral impact. In several countries, advance censorship of theatre and graphic art continued long after such controls had been dropped for press publications. Printed text came to be regarded as a less threatening communications medium, because so many poor people remained illiterate or semiliterate.

Whether in theatre, opera, film, or even songs, the perceived threat of instant, unmediated communication was compounded by the fact that these media were consumed collectively. They were thus, according to the scholar Robert Goldstein, considered “far more likely to provoke immediate action than printed matter typically read in the privacy of (often middle-class) homes.” As elaborated by an Austrian censor in 1795:

Censorship of the theatre must be much stricter than the normal censorship of printed reading matter. . . . The impression made [by a dramatic work] is infinitely more powerful . . . because [it] engages the eyes and ears and is intended to penetrate the will of the spectator in order to attain the emotional effects intended; this is something that reading alone does not achieve. Censorship of books can . . . make them accessible only to a certain kind of reader, whereas the playhouse by contrast is open to the entire public, which consists of every class, every walk of life, and every age.

And when this impressive experience is shared in darkened rooms by simple people, according to a French theatre censor in 1862, the risk of chaos results:

An electric current runs through the playhouse, passing from actor to spectator, inflaming them both with a sudden ardor and giving them an unexpected audacity. The public is like a group of children. Each of them by themselves is sweet, innocuous, sometimes fearful, but bring them together and you are faced with a group that is bold and noisy, often wicked. The courage or rather the cowardice of anonymity is such a powerful force!

Preventing such electric currents kept theatre censors busy throughout the century. While special scrutiny was paid to inexpensive venues, plays performed before all strata of society were examined. Regardless of where they were performed, any play that impugned ruling authority would likely be censored. Austrian censors demanded that even fictional kings be depicted with delicacy. The producers of Shakespeare’s tragedy King Lear were told in 1826 to rewrite the play so that Lear did not die at the end, even though the story was rendered incomprehensible as a result. The censor believed it was wrong to show a king dying in a state of abject insanity.

Class-based censorship continued into the twentieth century, particularly of the new and first truly mass medium of cinema. The degree of concern over how impecunious audiences might respond to political, sexual, or criminal messaging in movies would be laughable, had it not been so harmful. But restrictions on cinema were soon folded into a more complex global matrix of censorship, lies, and selective truth telling that took shape amid the propaganda-soaked cataclysms of two world wars and the rise of broadcast communications. As political censorship became associated with the regimes of industrialized murder and dissent came to be viewed as a positive attribute of a free society rather than the seed of its downfall, and as the West remade itself after World War II, the commitment to a truly free press and unconstrained self-expression—with significant hiccups, backtracking, and interruptions—expanded as never before.