Rebecca de Wolf is the author of the  forthcoming book, Gendered Citizenship (University of Nebraska Press, October 2021), which examines the competing civic ideologies embedded in the original Equal Rights Amendment conflict. Her writing has also appeared in Frontiers, New America Weekly, and the Washington Post. 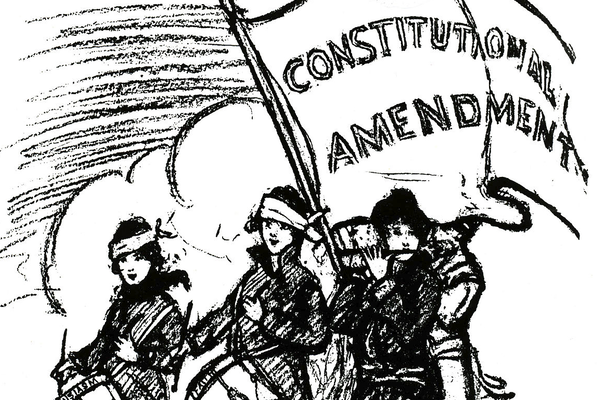 The fight over the Equal Rights Amendment is often framed as a classic fight between liberals and conservatives with liberals supporting the amendment to ensure gender equality and conservatives opposing the amendment to preserve traditional gender roles. But the history of the ERA before the state ratification battles of the 1970s shows that the fight over complete constitutional sexual equality did not always fall along strict political boundaries. As the dynamics of the early ERA conflict suggest, support for and opposition to the ERA are not positions that are fundamentally tied to either conservatism or liberalism. The ERA was first introduced into Congress in 1923, and Congress held several hearings on the amendment from the 1920s through the 1960s. Early ERA supporters as well as amendment opponents included liberals and conservatives alike. At its roots, the ERA conflict reflects a battle over the nature of American citizenship and not a typical political fight between liberals and conservatives.

The resurrection of the anti-ERA campaign effort in the mid-to-late 1940s is a prime example of how the original ERA conflict transcended typical political disputes of the early twentieth century. The social upheaval of World War II created a surge in support for the ERA, which alarmed several notable ERA critics, such as Mary Anderson, former head of the Women’s Bureau, Dorothy McAllister, former Director of the Women’s Division of the Democratic Party, Frieda Miller, the new head of the Women’s Bureau, Frances Perkins, the Secretary of Labor, and Lewis Hines, a leading member of the American Federation of Labor (AFL). In a September 1944 meeting, the distressed ERA opponents decided to create the National Committee to Defeat the Un-Equal Rights Amendment (NCDURA). This organization hoped to break the growing energy behind the ERA by centralizing the opposition forces and launching a coordinated counterattack on the amendment.

While founders of the NCDURA were predominantly prominent liberal ERA opponents, the organization actively worked with conservative amendment critics to squash the growing support for the ERA. When word reached the NCDURA’s leaders in April 1945 that the full House Judiciary Committee intended to report the ERA favorably, the organization reached out to “the all-powerful” conservative Representative Clarence J. Brown (R-OH), as one NCDURA official had put it, to help stall the amendment in the House. Once the full House Judiciary Committee reported the ERA favorably in July 1945, the leadership of the NCDURA used its budding connections with Representative Brown and the House Rules Committee to delay action on the amendment.

The NCDURA worked with conservatives once again when the ERA made progress in the Senate in the period following World War II. After the full Senate Judiciary Committee reported the ERA favorably in January 1946, the NCDURA began to coordinate efforts with conservative Republican Senator Robert Taft of Ohio. Senator Taft opposed the ERA because, he claimed, it would nullify various sex-based state laws that he believed protected women as mothers and potential mothers. In preparation for the July 1946 Senate floor debate on the ERA, the NCDURA worked with Senator Taft to make sure that every senator received a copy of the “Freund Statement”, an extensive essay by eminent legal scholar and longtime ERA opponent Paul Freund that outlined various arguments against the amendment. Before the debate, the NCDURA and its allies in the Senate also introduced into the Congressional Record an article denouncing the ERA written by former First Lady Eleanor Roosevelt. The NCDURA’s work paid off. When the Senate voted on the ERA in July 1946, the amendment failed to receive the two-thirds majority of votes required for passage of a constitutional amendment.

In the final weeks of December 1946 and the early days of January 1947, it became clear to the NCDURA’s leaders that ERA supporters were not going to give up easily on their amendment. As a result, the NCDURA’s officials decided to continue to build relationships with prominent Republicans while creating a positive program that would provide an alternative measure for improving women’s status. In the months that followed, NCDURA leader Dorothy McAllister enlisted the help of influential Republican Party member Marion Martin, the founder of the National Federation of Women’s Republican Clubs, to encourage other important Republicans to oppose the amendment.

The NCDURA also began to work on a joint resolution that aimed to eliminate any possible harmful discrimination against women while reaffirming what ERA opponents believed to be equitable sex-based legal distinctions. The bill included two main objectives: declare a general national policy regarding sex discrimination and establish a presidential commission on the status of women. For the policy statement, the bill called for the elimination of distinctions on the basis of sex except for those that were “reasonably based on differences in physical structure, biological, or social function.” According to the bill’s backers, acceptable sex-based legal distinctions included maternity benefits for women only and placing the duty of combat service on men exclusively. The bill’s supporters also noted that the policy statement would only require immediate action by federal agencies; it would not necessitate immediate, compulsory action from the states. The purpose of the bill’s proposed presidential commission was to investigate sex-specific laws and make recommendations at the appropriate federal, state, and local levels.

In February 1947, the NCDURA had gained strong support for its bill from two influential conservative congressmembers: Senator Robert Taft of Ohio and Representative James Wadsworth of New York. While Senator Taft had started to help the anti-ERA effort in the mid-to-late 1940s, Representative Wadsworth had been a committed ERA opponent since the 1920s. Wadsworth supported the NCDURA’s bill because he believed that it would allow for the “orderly repeal” of unjust laws while preserving women’s right to special protection. Senator Taft and Representative Wadsworth introduced the Women’s Status Bill into Congress on February 17, 1947. To bolster support for the bill, the NCDURA changed its name to the National Committee on the Status of Women (NCSW) in the spring months of 1947.

The Women’s Status Bill, which was commonly referred to as the Taft-Wadsworth Bill in the late 1940s, obtained a decent level of support from both Democrats and Republicans. Most importantly for ERA opponents, the bill successfully helped to subdue the pro-ERA impulse that had taken root during World War II because the bill provided an alternative measure for improving women’s status that promised a degree of equality while preserving the rationale for sex-specific legal treatment. The NCSW had versions of the Women’s Status Bill introduced into Congress every year until 1954. While the measure failed to pass Congress, it did provide the blueprint for what would become President John Kennedy’s Presidential Commission on the Status of Women, which was created in 1961.

Opposition to the ERA is not the only position that has appealed to both conservatives and liberals. The pro-ERA momentum that accelerated during World War II had helped the ERA gain an array of backers from across the political spectrum. That momentum slowed because of the ERA opposition work in the post-war years. Still, it is important to recognize the ways in which support for and opposition to the ERA have the potential to attract conservatives and liberals alike. By giving greater attention to how the struggle over the ERA has defied conventional categories of political ideology, we can gain a greater appreciation for the complexities embedded in the fight over the ERA and a better understanding for why the amendment has yet to be ratified. ERA opponents succeeded in stopping the amendment in the post-World War II era because they embraced an alternative approach for improving women’s status. That approach appealed to many conservatives and liberals because it allowed for a limited equality that upheld what they believed to be women’s natural right to special protection.