Remember The Essential Workers After COVID: They Deserve Better

by Joshua B. Freeman

Joshua B. Freeman is Distinguished Professor Emeritus of History at Queens College and the Graduate Center, CUNY. The twentieth anniversary of his book, Working Class New York: Life and Labor Since World War Two, was the subject of a day-long conference at the CUNY School of Labor and Urban Studies on April 23rd. Video of the conference can be viewed on YouTube. 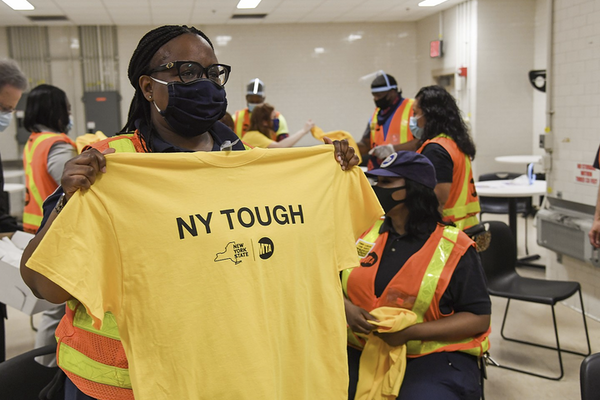 NYC Transit presented workers at the Hudson Yards subway station with these shirts last June 11 in recognition of unprecedented work to clean and disinfect the city's transit system.

As widening vaccination makes it possible to imagine a post-COVID New York, what will happen to the “essential workers” who have borne so much of the brunt of the pandemic?  Nurses, transit workers, delivery people, grocery clerks, warehouse workers, and the like suffered a terrible toll of disease, death, and family loss.  At the MTA alone, at least 157 employees died of COVID during the first year of the pandemic.  Workers who in the past had been all but invisible to many New Yorkers commanded new respect and acclaim.  If nothing else, we realized how dependent we are on their hard, dangerous, unglamorous, and often poorly-paid labor.

Pretty quickly, though, we began drifting back to our old ways.  The nightly clapping and pot banging for health care workers – a moving ritual of appreciation and solidarity – faded away.  Some retail and delivery companies instituted “hero” or “hazard” pay.  But by last July, Amazon, Whole Foods, Target, and Stop & Shop had reduced wages to their prior level (though some companies continued to pay occasional bonuses).  Protests and short strikes brought essential workers more PPE and improved safety conditions, but no long-lasting structural changes.  In a city with a short attention span, it seems like essential workers have had their fifteen minutes and it is time to move on.

Do we really want to leave it at that?  New York once paid much more attention to the millions of workers who did the grimy, monotonous, dangerous work to keep the city going.  Those workers, in turn, helped make the city a more livable, equitable, and secure community.  In the decades after World War II, at least a million New Yorkers belonged to unions, which showed their muscle as soon as the war ended with a series of strikes that virtually shut the city down.  Many also belonged to tenant groups, neighborhood associations, and ethnic societies that provided mutual assistance.  Politicians, not only in the two main parties but also in the American Labor and Liberal parties, both sponsored by unions, paid careful attention to the needs of their working-class constituents.

Unions, progressive professionals, and liberal and left-wing politicians together transformed New York life by creating institutions to meet the needs of the working population.  An expanded municipal hospital system and non-profit insurers like HIP, GHI, and Blue Cross served medical needs.  Tens of thousands of units of public housing and non-profit cooperative housing were constructed to meet a crisis of affordable housing, while rent control enabled those who already had homes to stay in them.  New public colleges like Baruch, Lehman, John Jay, and Medgar Evers were established, open enrollment instituted, and tuition eliminated.  While racial and gender discrimination remained pervasive, with union support New York State passed some of the first laws in the country banning discrimination in employment, union membership, and housing.  Plenty of people who today we would dub essential workers still had it hard, but as a group they had better homes, better health care, more income, and were more likely to be able to take vacations, retire in security, and launch their children off to better lives than at any time in the history of the city.

The advances stopped in the 1970s.  As the New York City government tottered on the edge of bankruptcy, working-class communities were devastated by municipal lay-offs, frozen wages, brutal service cuts, housing abandonment, fare hikes, and tuition charges at the City University.  When the city finally recovered, finance, real estate, and tourism dominated the economy, public policy, and civic culture like never before.  Michael Douglas’s unscrupulous Wall Street corporate raider Gordon Gekko displaced Jackie Gleason’s bus driver Ralph Kramden on The Honeymooners as the quintessential New Yorker.  Meanwhile, little attention was paid to the hundreds of thousands of immigrants who reversed the population decline of the city and contributed mightily to its revival.

Working people made occasional reappearances on center stage.  On 9/11, the city rediscovered the firemen, construction workers, restaurant workers, and police who were so many of the heroes and victims that terrible day.  But when lower Manhattan was rebuilt, little consideration was given to the needs of laboring New York, the kind of people who only shortly before had been hailed for their sacrifices and bravery.  In 2005, striking transit workers reminded New Yorkers of who—literally—kept the city going.  But mostly the sheen of wealth and style, which spread across Manhattan and into parts of Brooklyn and Queens, hid the labor of the home care workers, delivery people, dishwashers, street vendors and nail polishers who made the good life possible.  Most affluent New Yorkers did not know and did not care that they lived in a city with greater economic inequality and greater racial segregation than places like Houston that they looked down their noses at.

Now we have a choice to make.  Public policy helped turn New York into a finance center whose most outstanding product is inequality: subsidies for office towers, corporate tax exemptions, rezoning, prioritizing cars and commuter rail while buses creep along congested streets, massive investment in policing while social services remain woefully inadequate, and on and on.  In spite of scare talk from Albany, New York is not poor; tax revenues dropped only modestly during the pandemic and a huge inflow of federal money will soon arrive.  Now is the time to rebuild our social capital: repair our existing public housing and build government-owned housing that glistens like the high-rises for the rich; promote more non-profit cooperative housing, like Penn South and Rochdale Village, which have served residents so well; extend the subway, this time not to Hudson Yards but to southeastern Brooklyn and eastern Queens; build public hospitals that can compete with the rich Manhattan medical complexes, with their billionaire donors and government handouts, so when the next pandemic hits we do not see another sight like Elmhurst Hospital last spring.

We can do a lot even without spending much public money.  New York State’s adoption of a fifteen dollar minimum wage was a good first step, but let’s be honest, that is still pretty paltry pay to survive in New York City.  Let’s raise the minimum further for essential workers, perhaps requiring bonus pay during health crises, and while we are at it let’s get serious about enforcing health and wage standards for all workers rather than looking the other way.

All of us literally owe our lives to our essential workers.  Let’s not forget it.  Giving them a fair shake is not only a moral obligation, it will make a better city for all of us.