Stephanie Hinnershitz holds a Phd in American history and has taught at universities including the United States Military Academy at West Point. She is the author of the forthcoming book Japanese American Incarceration: The Camps and Coerced Labor in WWII (Penn Press, 2021). 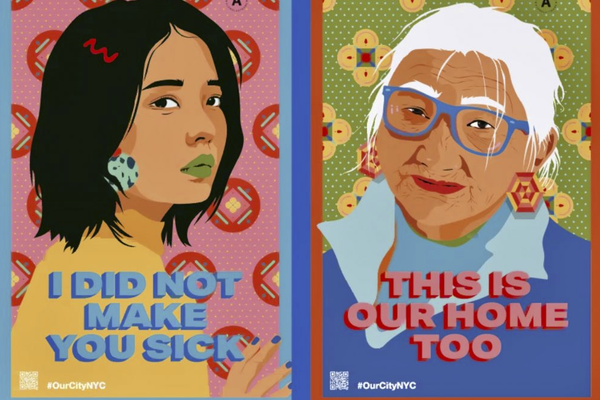 Poster images by Amanda Phingbodhipakkiya, from I Still Believe in Our City, a recent public art campaign for the New York City Commission on Human Rights.

“Until we address the discrimination and harassment against Asian Americans today, they will become deeply entrenched in the fabric of our nation, causing unimaginable harm and suffering and taking decades to undo,” Manjusha P. Kulkarni, Executive Director of the Asian Pacific Policy & Planning Council, explained in a recent written statement submitted to the House Subcommittee on Constitution, Civil Rights, and Civil Liberties. On March 18, activists, scholars, and artists across the Asian American and Pacific Islander community provided testimony on the increase in anti-Asian hate speech and violence since March of 2020. These attacks aligned with former president Donald Trump’s use of phrases like  “Chinese virus” on Twitter and in public statements. Stop AAPI Hate—a coalition of activists and scholars maintaining a database that contains nearly 3,800 documented incidents of verbal and physical abuse—has continued the legacy of Asian Americans pursuing protection by presenting evidence of racism.

But what comes next?

Forty-two years ago, Asian Americans spoke to legislators in DC as consultants on civil rights issues still faced by the AAPI community long after the legislative milestones of the 1960s. From May 8th to the 9th in 1979, the U.S. Commission on Civil Rights held its first hearing on specific rights violations encountered by Asian Americans. It coincided with increasing representation of Asian Americans in politics and Congress’s passing of Public Law 95-419, which designated the week of May 4th as Asian American Pacific Islander Week. Just a few days earlier, President Jimmy Carter declared, “We have succeeded in removing the barriers [for Asian Americans] to full participation in American life.” Refugees from southeast Asia fleeing the wreckage of the Vietnam War were also resettling in the US, adding diversity to the AAPI community and, Carter declared admiringly, "their successful integration into American society and their positive and active participation in our national life demonstrates the soundness of America’s policy of continued openness to peoples from Asia and the Pacific." Carter’s praise for the AAPI community and their “enormous contributions to our science, arts, industry, government, and commerce” bolstered the idea of Asian Americans as the model minority who had overcome adversity to achieve the American Dream.

However, for those who appeared before the Commission, Carter’s comments did more harm than good. He described Asian Americans as economic drivers for the United States whose rewards were acceptance and economic comfort—an idea that glazed over the challenges they faced. Dr. Ling-Chi Wang, then an assistant professor in Asian American Studies at the University of California at Berkeley, provided a historical overview of Asian American experiences that clashed with Carter’s simplistic characterizations. “I just want to add,” Wang stated during his testimony, “that current popular beliefs, held most firmly by government agencies—that Asians have no problems, that Asians have made it, that Asians take care of their own problems, and that Asians are too proud to seek government assistance—are but persistent manifestations of the highly institutionalized government attitude toward Asian Americans of benign neglect.”

This neglect stemmed from a history of exploitation by the government and white employers. “Almost without exception,” Wang continued, “each economic crisis was accompanied by an anti-Asian movement… each Asian group was imported to meet a concrete demand for cheap labor, and each was subsequently excluded by law when each was no longer perceived to be needed or when it was no longer politically and economically expedient to continue its utilization.” Racist policies excluded Asian immigrants, making them expendable, rendering them as outsiders, and making them easy to scapegoat in different crises. As Wang charged, the model minority myth “absolves the government of any responsibility of protecting the civil rights of Asian Americans and assigns Asian Americans to a permanent status of being neglected.”

Others presented evidence of the damage from more than a century of anti-Asian sentiment. Challenges faced by Asian Americans ranged from limited access to health services, lack of bilingual educational resources, and poverty—social problems also encountered by other communities. Participants in the consultation offered solutions such as promoting more representation in the federal government, directing more money to community grants, and developing a set of criteria for identifying civil rights violations specific to Asian Americans. There was hope—particularly after the movement for reparations for Japanese Americans who survived incarceration during World War II—that with more attention, Asian American civil rights would progress.

But in 1986, the Commission on Civil Rights issued a disturbing report. “Recent Activities Against Citizens and Residents of Asian Descent” noted an uptick in attacks on Asian Americans. Economic competition from Japan spurred a reinvigorated anti-Japanese movement in the US during the early 1980s. In 1982, a Japanese American state legislator in California reported that someone had spray-painted the word “Jap” on his garage door while a group called the White American Resistance Movement distributed anti-Asian pamphlets throughout San Francisco. The report connected these incidents to the death of Vincent Chin, a Chinese American draftsman who was murdered by two white men who had recently been laid off from an auto plant in Detroit. They blamed Chin for the layoffs—thinking he was Japanese—and brutally beat him.

The recent deadly, racially-motivated attacks on Asian American women in the Atlanta metro area has brought attention to the historic trend highlighted by Wang during his 1979 testimony. In May of 2020, the Commission on Civil Rights promised to prosecute civil rights violations and hold public hearings on anti-Asian hate, but these initiatives had largely languished despite calls from the AAPI community for legislators to take verbal and physical abuse seriously.

The promises made by the Commission in 1979 did not save Vincent Chin. And now—as Wang predicted—the COVID-19 pandemic is the latest in a long list of crises that produced violent anti-Asian attacks. The Chinese Exclusion Act and other historic moments are crucial to understanding where the nation is today, but historians have more contemporary examples to draw from. The pleas for help in 1979 before the Commission on Civil Rights largely went unanswered. Today, holding public officials accountable for the promises they will undoubtedly make to the AAPI community after recent hearings depends upon forcing Americans to reckon with a cycle of perpetual scapegoating and the racist language that makes it possible.