Power to Rule the Skies: A Forgotten Innovator of the Strategic Air Command

Brent D. Ziarnick is an Assistant Professor at the Air Command and Staff College, Maxwell Air Force Base, Alabama.  His latest book To Rule the Skies: General Thomas S. Power and the Rise of Strategic Air Command in the Cold War (Naval Institute Press, 2021) is the first full-length biography of General Power. 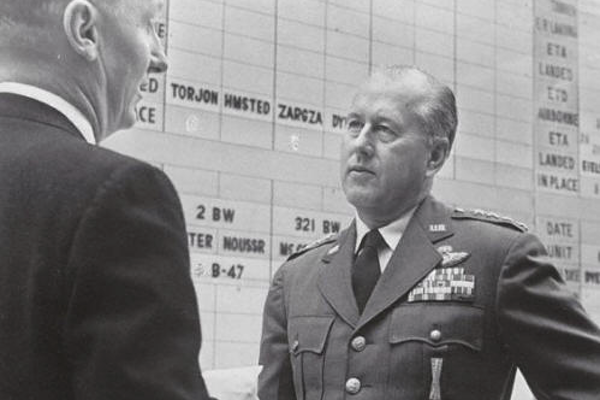 As a brash, young Army Air Force commander he masterminded and personally led the first mission to firebomb Tokyo, igniting a campaign that would end Imperial Japan.  After the Axis surrender, the general witnessed first-hand the destructive power of the atomic bomb at Bikini Atoll.  At the beginning of the Cold War, he took a role in the Berlin Airlift until called back quickly to the United States to turn the struggling Strategic Air Command from an amateurish collection of has-been World War II bombers and sullen aircrews into the nuclear striking force America needed to stare down the Soviet Union.  From 1948 until 1964, he crafted SAC into the most powerful striking force the world had ever seen and commanded the force – some say as a cruel and even sadistic leader - during some of the Cold War’s most critical days, including the Cuban Missile Crisis.  He started flying World War I-era trainers and canvas bombers and ended his career commanding thousands of bombers and missiles capable of destroying entire nations – all because peace was his profession.

Many military historians may recognize this officer as General Curtis LeMay.  They would be wrong.

Thomas Sarsfield Power has long lived in LeMay’s shadow.  If Power is remembered at all today, it is often as an intellectually dimmer, more sadistic copy of LeMay.  Dimmer because Power didn’t attend college (due only to family hardship).  More sadistic, because Power was often LeMay’s hatchet man at SAC.  These inaccuracies remain because LeMay and Power were almost inseparable for the most of their post-war careers, with LeMay being the senior officer.

Power was in Kansas perfecting radar bombing in the B-29 while LeMay lead B-17s deep into Germany.  The men met in Guam where Power served as one of LeMay’s B-29 wing commanders.  After leading dangerous but ineffective bombing raids over Japan, Power used his technical experience to develop a plan for his B-29s to use radar to fly low-level bombing missions using incendiary, rather than high-explosive, bombs.  LeMay immediately approved the brilliant idea, and chose Power to lead the initial attack.  The resulting mission was the single most destructive bombing raid in human history, burning 16 square miles of Tokyo in a matter of minutes, proving the low-level radar firebombing technique that would eventually devastate Imperial Japan well before the arrival of the atom bomb.  Contemporary newsmen and later historians credited the attack and its tactics to LeMay, limiting Power’s contribution to flying the mission… if he was mentioned at all.

After World War II, Power’s career was intimately entwined with LeMay’s.  LeMay chose Power to be his deputy commander when LeMay was tasked with rebuilding SAC.  From 1948 to 1954, Power was LeMay’s right-hand as America’s moribund bomber force was forged into America’s Big Stick to keep the Cold War peace.  Many in SAC thought that LeMay ruled with a mailed fist rivaling the one on SAC’s shield, but it was often Power who brought that fist down on members who weren’t up to SAC’s exacting standards.  Only a brief three year stint as commander of Air Research and Development Command– where he led the development of some of the Air Force’s most iconic aircraft and missiles – interrupted Power’s SAC time.

However, because of their close connection, historians have tended to attribute Power’s successes to LeMay.  As SAC commander, Power incorporated the ICBM into SAC’s operations.  Power established the Joint Strategic Target Planning Staff and the Single Integrated Operational Plan (SIOP) that unified all United States strategic nuclear forces, dramatically enhancing America’s deterrent credibility.  Power led SAC during the Cuban Missile Crisis where SAC went to full airborne alert, dispersed its medium bombers to airfields all over the United States, flew reconnaissance missions that identified Soviet missiles in Cuba, and – perhaps most importantly – brought its untested force of Atlas, Titan, and even the brand-new Minuteman ICBMs to full alert.  When the nation needed it most, Power’s SAC delivered.  LeMay had very little to do with these advances, many of SAC’s most iconic events.

Power was not a secondhand LeMay.  He was instead a brilliant tactician and operational commander in his own right, who himself was responsible for many great Air Force innovations, including setting a bold but forgotten vision for the Air Force in space.  It is far past time for Power to take his rightful place as one of the Air Force’s important and fascinating aerospace commanders.