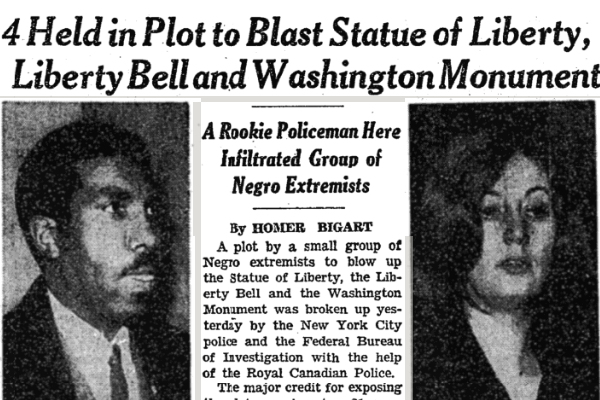 The release of the film “Judas and the Black Messiah” has put a renewed spotlight on the Counter Intelligence Program (COINTELPRO) of the Federal Bureau of Investigation (FBI). The film dramatizes the story of Black FBI informant, William O’Neil, who infiltrated the Chicago branch of the Black Panther Party and how his actions ultimately led to the assassination of its leader Fred Hampton and Panther member Mark Clark by the Chicago police department. The assassination was part of a larger set of objectives by police and the FBI’s COINTELPRO program to "misdirect, disrupt, discredit and neutralize" any black activist groups it deemed “Black extremist.”

As a result, Fred Hampton was not the only black leader targeted. The recently released memoir The Ray Wood Story reveals a similar circumstance that began with infiltration into the Congress of Racial Equality (CORE), and ended with accusations of COINTELPRO’s role in the Malcolm X assassination. While much is being made of what the book has to say regarding the murder of Malcolm X, there is little discussion of the book’s claims concerning the New York City Police Department’s (NYPD) efforts to destroy CORE, one of the most significant organizations of the civil rights movement.

According to the book, Raymond Wood was a newly recruited NYPD officer in the Bureau of Special Services and Investigations (BOSSI) assigned to specifically discredit the local leadership of CORE chapters. Dr. Chenjerai Kumanyika suggests in his foreword for the book that these illegal actions were most likely in response to CORE’s campaigns against police brutality. I would add NYPD’s actions were in general a response to CORE’s growing militancy.

According to The Ray Wood Story, in April 1964 Wood became a member of BOSSI, a special division of NYPD created to monitor and surveil political radicals. BOSSI was just one of many such local police groups around the country that functioned as satellites for COINTELPRO.

Wood was immediately assigned to infiltrate the Bronx chapter of CORE. The assignment followed only a few weeks after Bronx CORE carried out two major police brutality demonstrations at NYPD headquarters and City Hall. The demonstrations caused such a disruption that Bronx CORE’s chairman Herb Callender was singled out by the police commissioner in the press as one of the three most “irresponsible” Negro leaders in the city, along with Malcolm X and rent strike leader Jesse Grey. Callender was further accused of having a “lust for power,” “sinister motives,” and “no real concern for the fight for equality or for the people waging this battle.” Undaunted, Callender followed with his own statements to the press: “We’ll have to shock the officials and the public to get the city to face up to the realities of the day.”

In July, Callender, Wood and another member of Bronx CORE tried to make a citizen’s arrest of New York City (NYC) Mayor Robert Wagner. Callender was himself arrested but instead of just being placed in jail the judge had him committed to Bellevue Hospital for psychiatric evaluation. The implication that Callender may have been mentally ill could have potentially ruined his credibility as a civil right leader. He spent five days there until he was bailed out and eventually found guilty of disorderly conduct. In discussing the incident, James Farmer, in his book Lay Bare the Heart, stated that Callender told him the idea to arrest the mayor was Wood’s.

Wood himself confirmed Callender’s claim and admitted that his job was to discredit Callender as a leader and, by extension, potentially neutralize CORE. However, he claimed to later reject the assignment because he saw no real evidence of serious crimes being committed. His supervisor’s response was to assert “extreme pressure… to produce an arrest.” Wood was threatened by his handlers with arrest for selling marijuana, even though it was his handlers who gave him the cover of a drug dealer. Just as in the case of William O’Neil and the Black Panthers, law enforcement and the intelligence agencies used the threat of arrest as a common tool to target and coerce informers into acting as traitors to the Black Freedom movement.

This is only part of the story. There is additional evidence not presented in the book that threats to Wood were far more lethal than imprisonment. In personal communication with the author, he revealed to me that Ray Wood had stated his handlers also threatened to expose him as an undercover cop – an act that undoubtedly was intended to make Wood fear a brutal attack and ultimately death in prison. This would help explain his motivation to remain, because in a very short period of time Wood worked his way up the ladder and became not just a leader within Bronx CORE but a delegate to CORE’s annual national convention. The resulting exposure enhanced his activist profile and brought him into contact with and gave him the opportunity to gather intelligence on CORE members from all over the country.

Meanwhile, he continued socializing locally with CORE members, dating them and going to other chapters’ functions, such as the events sponsored by the East Harlem chapter, East River CORE. Nicknamed the “River Rats,” East River CORE was arguably at one point the most militant chapter in NYC. On March 6th, the same day Bronx CORE sat in at NYPD headquarters, several members of East River CORE staged a sit in on the nearby Triborough Bridge in the middle of traffic during rush hour. This was the first time the tactic had been used in the civil rights movement and, as the New York Times stated, it was carried out with military precision. Probably not by coincidence, the head of the chapter, Blyden Jackson had been in the Marines.

East River CORE member Stuart Wechsler shared with me that when Wood came to meetings he would help to set up chairs and be generally helpful, but also once suggested to Wechsler that they rob liquor stores in order to raise funds for the chapter. Wood would later testify against Blyden Jackson for being a Communist before the House Committee on Un-American Activities in 1967. This helped create a narrative where Jackson was potentially an agent of a foreign power, which played into false claims that the civil rights movement was part of a subversive plot to destroy America.

Rafael Martinez, another member of the New York CORE chapter in Harlem, remembers Wood being next to him when he sat in at that year’s World’s Fair demonstration. The sit-in inside the Fair corresponded to an even more audacious protest, the Stall In, which was planned by the so-called “ghetto chapters”--Brooklyn CORE, Bronx CORE and New York CORE. The protest was meant to bring attention to CORE’s ongoing efforts to fight against racism in the construction industry.

Set to take place on the opening day of the World’s Fair, April 22, 1964, the Stall In intended to have drivers stall their cars in the middle of traffic throughout the city. With newspaper headlines such as “…CORE's Fair Tie-up Can Paralyze the City,” even the White House took notice. The resulting chaos could have not only potentially disrupted the World’s Fair on a massive scale, as historian Brian Purnell has pointed out in his work on Brooklyn CORE, it could have embarrassed the United States on an international level. The protest threatened to expose America’s hypocrisy for preaching democracy across the globe while failing to practice true democracy at home. The Stall In was announced publicly by Brooklyn CORE as early as April 9. According to the book, Wood was hired by NYPD on April 18th. This supports the idea that he was brought on specifically to deal with the rising militancy in CORE.

Even more interesting, Martinez stated to me that when he saw Wood again a few weeks later at the New York CORE office in Harlem, Wood suggested to him in a conversation that they blow up national monuments including the Statue of Liberty.

Wood recounted that he left CORE in November and was reassigned to other groups, specifically the Black Liberation Front (BLF). He successfully got BLF members Walter Bowe and Khaleel Sayyed arrested by instigating a plot to blow up the State of Liberty and other national monuments. Wood’s book contends this was done to weaken Malcolm X’s security, making it easier to assassinate him; Sayeed and Bowe had also been members of and worked security for Malcolm X’s Organization of Afro-American Unity.

While much is being made of the claims concerning Malcolm X’s assassination, lost in the discussion is how the experiences of CORE members support the claims by Bowe and Sayeed that it was Wood’s idea to commit felonious actions. Wood insisted that the idea came from his handlers.

Ray Wood was a classic agent provocateur, once described as an “ebony James Bond” by Max Stanford, one of the founders of the Revolutionary Action Movement. Wood’s actions were classic COINTELPRO in that he not only discredited but potentially neutralized leaders of two of the most militant CORE chapters not just in NYC but in the country. His attempts to engage CORE members in such acts of violence could have helped destroy the reputation of CORE, an organization dedicated to non-violent direct action, and de-legitimize the entire civil rights movement.

Wood’s presence demonstrates how CORE was seen as a real threat by the State. His case was hardly an isolated one. Interviews with Harlem CORE members indicate that Wood was far from the only police agent to have infiltrated the CORE chapters in NYC. Other chapters from across the country, like Miami CORE and San Francisco CORE, had over the years been subject to such dirty tricks. In fact, CORE had been monitored and under surveillance by the FBI since its inception in the early 1940’s.

The conversation about the case of Ray Wood needs to be expanded beyond its connection to Malcom X. Besides CORE, Wood was interacting with members of many other groups including the Nation of Islam, the Black Panthers, the Revolutionary Action Movement, the Student Non-Violent Coordinating Committee and the Organization of Afro-American Unity. The simplest way to confirm the veracity of Wood’s claims would be to release the FBI and NYPD files not just on Ray Wood and Malcolm X but on all these groups. We need to know and understand the full extent of how much these programs and efforts damaged the civil rights and Black Power movements specifically and the Black community in general.

The recent events during the Jan. 6, 2021 riots at the Capitol has brought national attention to the question of White supremacy in law enforcement, the intelligence agencies and the military. If the Biden administration is serious about dealing with this problem, here would be a great place to start.