Stephen J. Pyne is an emeritus professor at Arizona State University and the author most recently of The Great Ages of Discovery. How Western Civilization Learned About a Wider World. 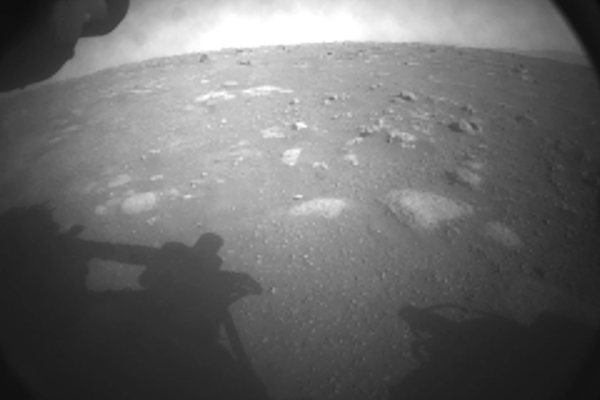 There is a lot to marvel at Perseverance’s February 18 landing on Mars, beyond robotic exploration as an extreme sport.  Only half of attempted missions to Mars have succeeded, and the sheer technical audacity that stuck Perseverance’s landing is guaranteed to dazzle.  But America’s latest endeavor joins two other missions from civilizations re-emerging as global actors after centuries of exploring quietude. Perhaps more deeply, Perseverance’s first-contact photo, a shadow selfie, raises questions about the very nature of discovery and the character of an explorer.

All peoples are curious, and all travel, but 600 years ago Europe began granting those impulses something like an institutional form dedicated to geographical exploration.  The project was spearheaded by Portugal, a marginal country flanking a marginal continent.  The motivations behind dispatching expeditions of discovery involved plenty of pushes and pulls.  In its founding century exploration often stammered and sputtered amid spurts and long pauses.

Critical to the dynamic was geopolitical rivalry.  The Great Age of Discovery was powered by European states that projected their competitions outward – first between Portugal and Spain.  Early on the pope intervened, negotiating the Treaty of Tordesillas that divided the globe between them.  Where and when they stumbled, other European states moved in.  The chronic quarreling within Europe kept the larger pot simmering.

By the early 18th century, however, exploration was becoming moribund.  Trade routes were known, and newcomers like the Dutch, French, and British were content to pick off prize sites from Iberia’s creaking overseas empires.  Few new islands were discovered; buccaneering replaced exploration.  Even intellectual and literary enthusiasms were fading.  Robinson Crusoe (1719) is paean to perils of wanderlust; Gulliver’s Travels (1729) skewers discovery that then leads to conquest.  Like a rogue wave, the Great Age of Discovery had, it seemed, risen, spread, and subsided.

Then the process rekindled.  A new era of circumnavigation caught Europe’s fancy, northern Europe replaced Iberia as a colonizing force, and Britain and France began their long (and global) new hundred years war.  This time modern science had arrived to bond with voyages.  Expeditions were sent around the globe to track the transits of Venus and to measure the shape of the Earth, as knowledge and quests to fabled places joined spices and bullion as incentives.  What William Goetzmann termed a Second Great Age of Discovery revived and redefined Europe’s exploring tradition.

Successful exploration became a measure of power and prestige.  As settler societies sprawled across North America, Australia, and parts of Africa, the Neo-Europes began to sponsor expeditions of their own.  If the first age of discovery put the Renaissance to sea, the second age sent the Enlightenment.  A natural-history survey across a continent replaced circumnavigation as the age’s grand gesture.  By the 1870s expeditions had traversed the world’s habitable continents and the Challenger expedition was inventorying the world’s oceans.

Then, this age, too, stumbled.  It ran out of places to visit and, equally, the means to understand the remote lands that remained.  Antarctica posed challenges that led to some of the greatest survival stories in exploration history, but the available political, cultural, and scientific instruments ended in a whiteout amid a continent reduced to a single mineral.  Interestingly, the ‘heroic age’ attracted newcomers like Belgium, recent nations like Norway, aspiring nationalities like Scotland, and fast-industrializing Japan, all interested in using exploration to announce their arrival on the world stage.

Two world wars, a Great Depression, and an intellectual turn toward Modernism left exploration once more in a trough.  Geographic discovery and high culture had, it seemed, little to learn from each other.  Atoms and genes, Cubism and Dadaism had little valence with exploring new lands.  Decolonization removed Europe’s projected quarrels; the European Union, dedicated to replacing deadly competition with cooperation, would deny Europe the internal rivalries that had traditionally stoked exploration.

But Western-style exploration was not yet ended.  Beginning in the post-war era, announced by the International Geophysical Year (1957-58), a Third Age of discovery began – this one outfitted with rockets, submarines, remote-sensing devices, all of which could take exploration to places previously denied it.  The Cold War between the U.S. and the USSR furnished the necessary competition.

Antarctica was the pivot between second and third ages, but the major action occurred in the deep oceans and space.  All three realms were uninhabited, and uninhabitable without elaborate prostheses, even self-contained environments.  More broadly, the age’s hardware took it to novel places faster than the cultural software could process what it found.  The art, science, literature, politics, and legal systems that had interpreted previous ages struggled to understand places that lacked abundant specimens, perspectives, and people.  The great explorers are machines.

The moral drama of discovery, both for good and ill, has historically hinged on encounters between peoples.  But the primary explorers of the third age are robots and remote-sensing devices.  Rather than portraying explorers alongside longtime residents, first-contact images tend to be selfies, or in the case of Perseverance, a shadow of a selfie.  There is no Other, and in space, so far, not even other forms of life.  The ugliness by which contact had so often led to colonization does not exist, but neither do inherited expectations about what an encounter means.  Instead of an Other there is, it seems, an All, by which millions can participate in the first contact of Jezero Crater on Mars.

As in earlier ages, once the primary rivals stalled, others moved in.  What is striking today is the origin of those others outside the West.  India launched a Mars mission in 2014; Japan dispatched spacecraft to the asteroid belt; China and UAE currently have orbiters circling Mars.  They are providing the money and motives to propel discovery.  Prestige, technological stimulation, and geopolitical jostling have returned, but without the long and peculiar cultural engagement that had made exploration a quest narrative for Western societies.

The third age is different: it visits places without people, it has refashioned the identity of an explorer and redefined the notion of an encounter, and it can allow millions of viewers to experience a first-contact moment virtually.  Efforts to imagine expeditions to Mars or the Laurentian Abyss through the prism of previous centuries can end in parodies.  But the tradition has adapted previously to new participants and has repeatedly adjusted to the prevailing culture of its times, and there is hope that the same will happen now, and that the tradition, transformed, will persevere.