Ashley Farmer is Assistant Professor of History & African and African Diaspora Studies at the University of Texas at Austin, College of Liberal Arts. 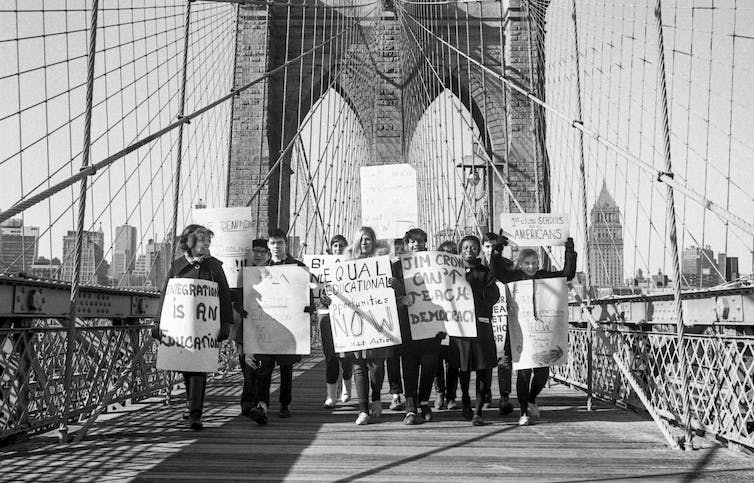 School boycott picketers march across the Brooklyn Bridge to the Board of Education in 1964. Bettmann Archive/Getty Images

Ashley Farmer, The University of Texas at Austin College of Liberal Arts

Whether it’s black-and-white photos of Arkansas’ Little Rock Nine or Norman Rockwell’s famous painting of New Orleans schoolgirl Ruby Bridges, images of school desegregation often make it seem as though it was an issue for Black children primarily in the South.

It is true that Bridges, the Little Rock Nine and other brave students in Southern states, including North Carolina and Tennessee, changed the face of American education when they tested the 1954 Brown v. Board of Education decision that mandated the desegregation of public education. But the struggle to desegregate America’s schools in the 1950s and ‘60s did not take place solely in the South. Black students and their parents also boldly challenged segregated schooling in the North. 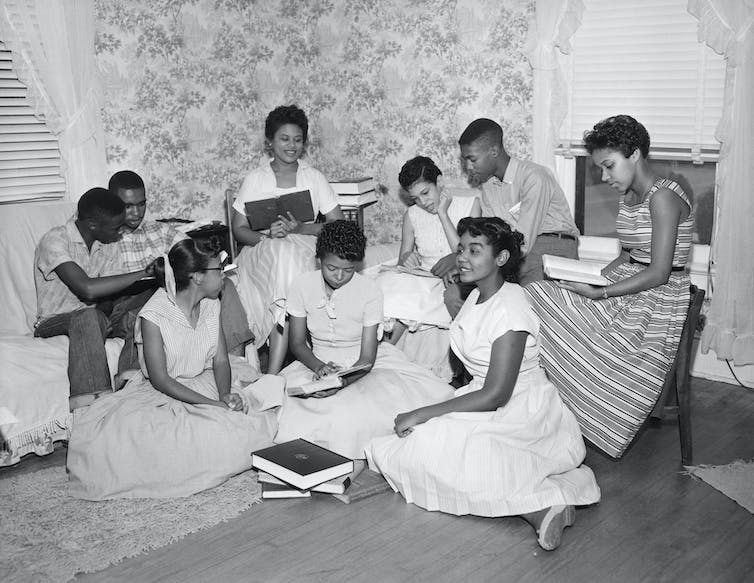 The Little Rock Nine form a study group together after being prevented from entering Central High School in 1957. Bettmann/Contributor via Getty Images

Mae Mallory, a Harlem activist and mother, serves as an example. Her name may not be the first one that comes to mind when it comes to 1950s school desegregation battles. Yet Mallory made history – and changed the face of public education – when she filed the first post-Brown suit against the New York City Board of Education in 1957.

Prompted by her children

Mallory got involved in education activism after her children – Patricia and Keefer Jr. – told her about the deplorable conditions of their segregated school, P.S. 10 in Harlem. Mallory joined the Parents Committee for a Better Education and became a vocal advocate of Black children’s right to a safe learning environment.

The turning point came when she indicted the racist school system in her January 1957 testimony before the New York School Board’s Commission on Integration. Mallory embarrassed the board by remarking that P.S. 10 was “just as ‘Jim Crow’” as the Hazel Street School she had attended in Macon, Georgia, in the 1930s. Her testimony was an integral part of the parental complaints that forced the board to construct a new building and hire new teachers.

Encouraged by this victory, Mallory began a fight to end the New York City Board of Education’s segregation practices. Existing zoning maps required her daughter, Patricia, to attend a junior high school in Harlem. Mallory argued that this school was inferior to others in the area and would not adequately prepare her daughter for high school. Instead, she enrolled Patricia in a school on Manhattan’s Upper West Side.

The board blocked Patricia’s enrollment. Mallory took action. With the help of a young Black lawyer, Paul Zuber, she sued, claiming existing zoning policies relegated her daughter – and other Black children – to segregated, inferior schools. Filed three years after Brown, Mallory’s suit forced the Board of Education to face the fact that segregation was a persistent problem in New York City public schools. Eight other mothers joined Mallory’s fight. The press dubbed them the “Harlem 9.”

Once filed, Mallory’s suit became front-page news in The New York Times. A year later, however, the case stalled. In an effort to spur the suit along, the Harlem 9 instituted a boycott of three Harlem junior high schools. Zuber knew that the mothers would face charges of violating compulsory school attendance laws. This, in turn, would force a judge to rule on their suit.

In December 1958, Judge Justine Polier sided with the Harlem 9, declaring: “These parents have the constitutionally guaranteed right to elect no education for their children rather than to subject them to discriminatory, inferior education.” The Harlem 9 gained the first legal victory proving that de facto segregation existed in Northern schools. The decision galvanized local Black parents, causing hundreds to request transfers for their children to better schools.

The parties reached a settlement in February 1959. The Harlem 9’s children would not enroll in the schools for which they were zoned. Nor would they be able to engage in “open choice” – the parents’ request to send their children to a school of their choosing.

Instead, they would attend a Harlem junior high school that offered more resources, including college prep courses, although it was still largely segregated. The Harlem 9 would be allowed to continue with their ultimately unsuccessful civil suit against the board. The mothers had also filed a million-dollar lawsuit seeking damages for the psychological and emotional toll their children endured in segregated schools. This was a compromise on all fronts. However, Mallory and the other mothers gained a substantial victory in forcing the court and the Board of Education to confront the segregation that existed in New York City public schools. Their boycott also became a unifying strategy for subsequent struggles, most notably for the 1964 New York City school boycott. During this boycott, hundreds of thousands of parents, students and activists engaged in a daylong protest of segregation and inequality in public city schools.

The Harlem 9’s fight serves as an important reminder that school desegregation protests were popular and successful in the North as well as in the South. It also provides insight into the prominent role Black women had in these struggles and the diverse range of strategies they deployed – from championing “open choice” to school boycotts – to help their children have access to equal education.

Even more importantly, perhaps, their fight demonstrates the importance of appreciating the different ways in which Black women compelled schools to make good on the Brown decision – a fight that, nearly 70 years later, is still being fought. The Supreme Court’s mandate in the Brown decision that public schools desegregate with “all deliberate speed” is unfinished. Nationwide, Black children remain in schools that are segregated, underfunded and overcrowded – much as they were when Mallory began her fight.