Shannan Clark is Associate Professor of History at Montclair State University.  He is the author of The Making of the American Creative Class: New York’s Culture Workers and Twentieth-Century Consumer Capitalism, new from Oxford University Press. 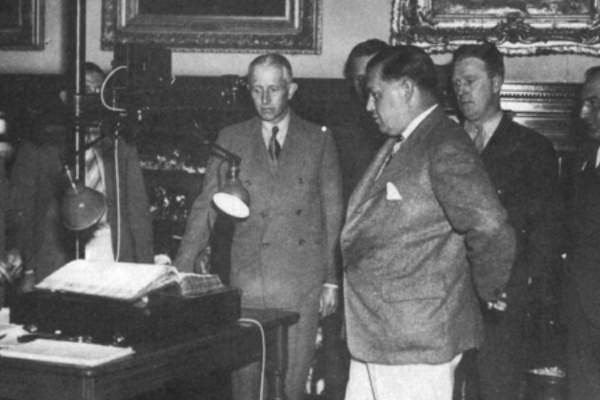 Preserving records on microfilm as part of the Historical Records Survey of the WPA, 1937

The COVID-19 pandemic has precipitated an existential crisis for higher education in the United States.  Nothing short of a massive public reinvestment will be adequate to meet the magnitude of the emergency.  Any federal program for assistance should look to the example of the New Deal, particularly the cultural projects established in 1935 as part of the Works Progress Administration (WPA).  Just as these projects provided jobs for thousands of out-of-work writers, artists, and performers during the Great Depression, a new public program is needed to provide full-time work for historians and other academics in the humanities and social sciences who now find themselves unemployed, underemployed, or otherwise precariously employed.

There are several reasons why the WPA culture projects –the Federal Art Project (FAP), the Federal Writers Project (FWP), the Federal Theater Project (FTP), and the Federal Music Project (FMP)– provide a useful model for responding to the current crisis of higher education.  First, the WPA culture projects democratized access to the making of American culture.  Talented young people, particularly those from working-class and minority communities, were able to pursue creative careers despite the economic catastrophe.  Second, the projects democratized access to various forms of culture, as the projects’ output were readily available as public goods.  In addition, public patronage, along with the organization and activism of the projects’ workforce, offered the promise of democratic control over the means of cultural production.

A new federal jobs program for the humanities and social sciences would similarly advance these democratic objectives.  Historians could be hired to create scholarly studies and educational materials as public goods, much as the authors of the FWP state and city guidebooks did more than eight decades ago.  Academics could be teamed up with artists in various media to document America’s past and to draw connections with the nation’s present, taking inspiration from the FAP Index of American Design and the experimental dramatizations of the FTP Living Newspaper series.  Or, following the example of the FAP Design Laboratory –which was the first comprehensive school of modernist design in the United States– scholars in the humanities and social sciences employed by the proposed program might establish new sites of innovation in teaching and research outside of the confines of conventional institutions of higher education.

In addition to the WPA cultural projects’ democratic ethos, their implementation of direct public employment also makes them such a vital precedent for the public reconstruction of the humanities and social sciences.  Unlike the National Endowment for the Humanities and National Endowment for the Arts founded in the 1960s as part of the Great Society, the WPA put writers, artists, and performers directly onto the federal payroll instead of injecting grant funding into existing networks of cultural patronage.  A new federal program modeled on the WPA would represent a desperately needed intervention into an academic labor market that has effectively collapsed.  By providing full-time, multi-year positions with a living salary and health insurance, the program would reverse the long trend toward casualization and begin the process of reestablishing acceptable labor standards that are humane for teachers and researchers and also essential for quality education and scholarship.

Furthermore, by placing thousands of academics on the federal payroll as full-time employees, the program proposed here would furnish a form of indirect assistance to hard-pressed universities, colleges, archives, libraries, museums, cultural centers, social service agencies, and other nonprofit entities.  While many of those hired by the program would ideally find ways to embrace the experimental and innovative impulses of the WPA cultural projects by founding new endeavors for producing and sharing knowledge, many others –perhaps the majority– would be allocated to existing institutions.  Colleges and universities participating in the program could upgrade adjunct faculty to full-time status, enhancing instructional quality through a substantial improvement in working conditions.

The Great Depression offers not only an historical example of direct public employment for members of America’s creative class, but also lessons for making it happen.  The New Deal cultural projects were established not just because President Franklin D. Roosevelt or WPA chief Harry Hopkins had a soft spot for artists, writers, and performers who were down on their luck, but because unemployed and underemployed white-collar workers in America’s culture industries organized during the 1930s to demand jobs from the federal government.  Moreover, they succeeded in pressing the Roosevelt administration to initiate the WPA cultural projects in large part because their various unions, committees, and associations were part of a broader Popular Front social movement that united white-collar and blue-collar workers around an agenda that included staunch backing for organized labor, advocacy for racial and ethnic equality, and opposition to fascism.

Any chance of securing a robust federal response to today’s crisis of academic employment will likewise depend on extensive organizing and coalition-building.  It will require solidarity among all workers on our campuses –both between contingent faculty and those who may feel that they are secure for the moment, and between faculty and our coworkers in support and service roles– to rebuild our system of higher education so that it can provide a decent living for everyone whose labor enables it to function.  It will require that advocates for a WPA-style program for the humanities and social sciences forge alliances with proponents of free public college and student debt cancellation.  And, ultimately, it will require a recognition that the crisis of academic employment in the field of History, and in the humanities and social sciences more generally, cannot be resolved within the confines of our system of higher education.  The push for public reinvestment in secure jobs in our colleges and universities will ultimately need to be part of a much wider movement to reshape the political economy of the United States.  It will need to be allied with groups promoting the public provisioning of other goods and services, including healthcare and housing, as well as with groups resisting the spread of precarious employment more generally in the “gig economy.”

The alternatives are bleak.  Administrators at many colleges and universities are reacting to the pandemic by imposing deep retrenchments on institutions already ravaged by austerity.  They are consolidating departments, terminating degree programs, and laying off faculty, even those with tenure in some cases.  New tenure-track hiring in fields like History, already woefully inadequate in the decade following the 2008-09 economic crisis, has essentially ceased.  An entire generation of educators and scholars is in jeopardy, facing the prospect of either relentless exploitation as precarious adjunct instructors or eventual departure from the discipline for more stable employment.

This is a needless tragedy for talented and dedicated young academics who have sacrificed for years to complete their doctorates and who now find their career aspirations thwarted.  It is also a terrible waste for our society, which more than ever needs the teaching and research that they would produce.  Furthermore, the current crisis represents a fundamental threat to the continuation of historical study as a collective intellectual endeavor.  Can the creation and transmission of historical knowledge as we have come to know it survive the loss of a cohort of scholars and educators, and the drastic contraction of graduate training that is already beginning?

Only a program of direct public employment for historians, along with other academics, can lead to a vibrant future for the discipline in which access to careers is expanded, with greater diversity and equity.  The history of the WPA cultural projects shows us the way.