Mark F. Fernandez is the Patricia Carlin O’Keefe Distinguished Professor and Chair of the Department of History at Loyola University New Orleans. In 2012 he was named the Seventh Annual Woody Guthrie Fellow by the Woody Guthrie Foundation and BMI Music Publishing. 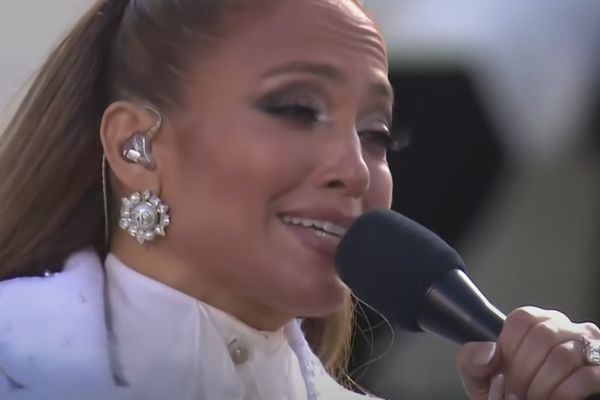 At President Joseph Biden’s inauguration Jennifer Lopez performed beautiful renditions of Woody Guthrie’s “This Land is Your Land” and Katherine Lee Bates and Samuel A. Ward’s “America the Beautiful.”

At first blush, the choice of these ballads may seem a no-brainer. Presidential inaugurations hold symbolic meaning and nearly all Americans grew up singing these songs. But if we dig a bit deeper, the use of Guthrie’s iconic anthem reveals much about the complex history of the United States and the wide divide between views of what America stands for today.

Most of us know the first four verses of the popular ballad, but the final three stanzas, the ones we never sang in school, tell a crucial story about Guthrie’s love of and critique of the country. In the pivotal fifth verse, the first of the three, Guthrie wrote:

As I went walking I saw a sign there,

But on the other side it didn’t say nothing.

That side was made for you and me.

In his rejection of private property, one of the central features of most conceptions of the “American Dream,” Guthrie paints a vision of another America, one that belongs to everyone and one in which no one can be shut out—a view that he developed as he traveled across the country for half a decade beginning in 1935.

Guthrie wrote the song in February 1940 after completing a long journey from California to New York City. Along the way he repeatedly heard Kate Smith’s version of Irving Berlin’s “God Bless America” which was a popular hit at the time. The America that God blessed just didn’t jibe with the reality of what Guthrie witnessed on his travels during the Great Depression. The “Okies” and “Arkies” that were turned away at the California border by the extra-legal “Bum Brigades,” the refugee camps that housed those that did make it across, and the hobo life and harsh traveling conditions that he famously chronicled several years later in his memoir Bound for Glory all belied the image of America presented in Smith’s recording. The America that Guthrie saw was hardly blessed—it was poor, it was suffering, it was struggling to survive.

Unlike Bruce Springsteen and Pete Seeger, who performed all of the lyrics at Barack Obama’s inauguration in 2009, J-Lo sang only the early verses, perhaps in a nod to the unity that the new President is hoping to bring to the country. Even though she left the later, critical stanzas out of her medley, the use of the song should resonate to all that grasp its meaning.

Was the decision to use the song a critique of Donald Trump’s nationalism and his nods to white supremacist groups and insurrectionists to whom he has openly expressed his love? Was it a wider rejection of Republican ideas of America?

Just a day before the inauguration, Trump’s secretary of state Mike Pompeo tweeted out a blistering attack on multiculturalism, embracing nativist views of a homogenized and assimilated American people—ideas that marginalize Americans. Ideas that don’t fit at all into the inclusive message of Guthrie’s ballad. Lopez’s use of Spanish to recite the most crucial message of the pledge of allegiance “Una nación, bajo Dios, indivisible, con libertad y justice para todos” which translates to “One nation, under God, indivisible, with liberty and justice for all” as a segue between the two songs celebrates the reality of that multiculturalism in America.

The use of Guthrie’s song is also fascinating because of Guthrie’s own affiliation with the Trump family. As historian Will Kaufman revealed in the buildup to the 2016 election, Guthrie lived in an apartment complex in Brooklyn called “Beach Haven” which was owned by Fred Trump, the outgoing president’s late father. In one of Guthrie’s notebooks, housed at the Woody Guthrie Center in Tulsa, Oklahoma, he drafted several songs and musings denouncing the elder Trump as a racist. The Trump Management Corporation would later be sued twice by the Department of Justice for violations of the Fair Housing Act. At the time of the second suit in 1973, Donald Trump was president of the corporation.

Whether Lopez’s choice of the song was deliberate or not, or whether she took all of these issues under consideration isn’t the point. What is significant is that Guthrie’s lyric, his notion of an inclusive America, still resonates today as Americans ponder questions of unity. Although many Americans still oppose such inclusiveness, her choice evokes the powerful message of Guthrie’s ballad and reprises his hope for an inclusive nation.

THIS LAND IS YOUR LAND

Words and Music by Woody Guthrie

International Copyright Secured Made in U.S.A.

All Rights Reserved Including Public Performance For Profit