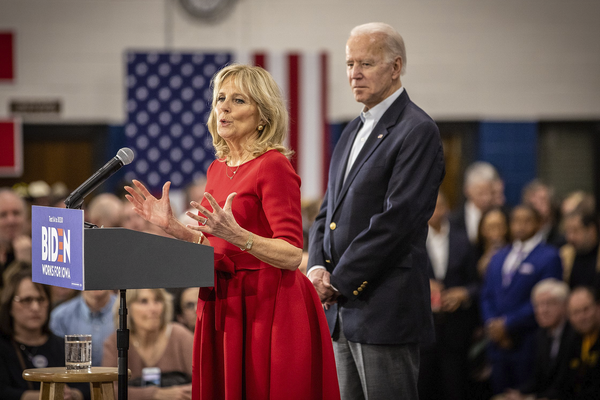 “Forget the small thrill of being Dr. Jill, and settle for the larger thrill of living for the next four years in the best public housing in the world as First Lady Jill Biden.”

By now, most have either read or read about Joseph Epstein’s Wall Street Journal op-ed titled “Is There a Doctor in the White House? Not if You Need an M.D.” Mr. Epstein asserts that the meaning of a doctoral degree has been lost over time because it has become so much easier to get one. The author, though, never earned one himself. He laments throughout his article about how he was regularly called “Dr.” but rejects the title. As he says to Dr. Biden directly, “A wise man once said that no one should call himself ‘Dr.’ unless he has delivered a child. Think about it, Dr. Jill, and forthwith drop the doc.” He mocked Dr. Biden’s dissertation as “unpromising,” by not only including the title, “Student Retention at the Community College Level: Meeting Students’ Needs,” but pointing out the fact that she earned it from a state school, the University of Delaware. For a field he is eviscerating as elitist, he sure seems to be one himself. Mr. Epstein, your snobbery (and hypocrisy) is showing.

The Wall Street Journal editorial page editor, Paul Gigot, defended Mr. Epstein’s article saying “There’s nothing like playing the race or gender card to stifle criticism.” Mr. Gigot accused the Democratic Party generally, and the Biden-Harris team specifically, of orchestrating outrage, asking, “Why go to such lengths to highlight a single op-ed on a relatively minor issue?” Claiming misogyny is a minor issue is not new, and I suppose this one case of this one article’s overtly misogynistic content might not get so much attention. However, this is not simply a case of a privileged, elitist, condescending op-ed in a major newspaper. It is endemic of the systemic and institutional sexism in both our country and academia. This one person’s hot take on Dr. Jill Biden is not what really drove Michelle Obama to post on social media about this, it did not create the wave of women posting about their doctorates.

It is not about doctorates. It is not about accomplishments, really. It is about how women are seen (and not). It is about how women are defined by others, as opposed to being able to define themselves. Women’s stories are written before they can even hold a pen. For example, when Mr. Epstein begins his article referring to Dr. Biden as “Madame First Lady—Mrs. Biden—Jill—kiddo,” he gives away the game. He reveals how society sees women: as someone who needs to be told who she is and how to present herself. For her own good, she is infantilized to make her way through the big, bad world. This form of sexism, benevolent sexism, is not necessarily overt. It is not hostile. Yet, it reflects the reality of society’s ingrained beliefs and latent suggestions that women are inferior to men. The condescension of the word” kiddo” here is particularly telling. It’s the proverbial pat on the head, telling her to shut up and sit down and know her place. According to Mr. Epstein, her place in the White House is what should define her - nothing else. Her role as the dutiful wife is her “thrill,” and in the end, her only identity. Mr. Epstein, your misogyny is showing.

Research on the roles of the First Lady, and public evaluations of first ladies stress their lack of autonomy. Specifically, the constraints they face are the boundaries created by socially constructed gender roles. In the end, how successful a first lady is perceived to be is based on how well she upholds the expected gender roles at the time she occupies the office. Of the eleven roles of the First Lady, the primary one is wife and mother, and no matter how successful of a party booster, social hostess, or presidential proxy she is, she will first and foremost be judged by how well she can be the symbol of American womanhood. She needs to be always all things to all people at all times. Michelle Obama notes in the preface of her memoir Becoming, “When you are First Lady, America shows itself to you in its extremes.”

As gender roles have progressed, we might expect so have the expectations for first ladies. Let us look at it this way: While women were about 29% of the labor force in 1945 and are about 47% as of November 2020, survey data find that people still think it is best for both mothers and children for mothers not to work full time. Here again lies the benevolent sexism: it is best for mothers not to work because it will be too difficult for them to handle. Just stay home, kiddo; we know what is best. With no children to rear, Dr. Biden does not need to be the “mom-in-chief” like Michelle Obama dubbed herself. She only needs to be the wife. Mr. Epstein’s article reminds us how grateful Dr. Biden should be for that and how she will be judged like every other first lady before her.

I would be lying if I said I did not take issue with Mr. Epstein’s article as a person, a woman, who earned a doctoral degree. When he says these degrees have less value because they are not as hard to earn as in previous decades, I think of the five years I spent learning, writing, teaching, and growing as a person and a scientist. I spent countless nights shredding my own arguments to contribute something unique enough to my field that would earn me those three letters after my name. Those letters that grant me the title before it: Dr.

Mr. Epstein believes that antiquated canons of education equal rigor, equal deserving of a doctoral degree. The scenarios he describes took place during a time when white men were the only ones earning doctorates. That is how he sees those who are worthy of a doctorate: white men like him. Again, he gives it away saying, “Dr. Jill, I note you acquired your Ed.D. as recently as 15 years ago at age 55, or long after the terror had departed.” The intentional wording “Dr. Jill” as opposed to “Dr. Biden” further shows his contempt for the success she deigned to achieve. Mr. Epstein, your insecurity is showing.

When Dr. Jill Biden becomes the First Lady on January 20, 2021, the title she earned from that state school 15 years ago becomes secondary to her public identity. She will be first and foremost the president’s wife. Though, I have no doubt she will employ both her expertise in education and her decades of experience in public life to, as she wrote on Twitter in her response to Mr. Epstein, “build a world where the accomplishments of our daughters will be celebrated, rather than diminished."