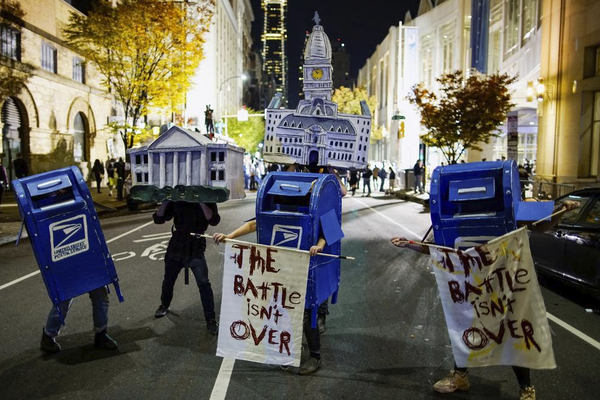 They came from Washoe County, where once in 1865 the 1st Nevada Cavalry Battalion had massacred 29 Paiute Indians, and they cast ballots by mail and in person. They came from Chatham County, a place where almost half of the population was in bondage when William Tecumseh Sherman made his march of liberation to Savannah in 1864, and they voted to elect the first Black woman as Vice President. They came from Philadelphia County, where in 1844 a group of nativists rioted and burnt two Catholic churches to the ground, and they elected our second Irish Catholic president. And they voted in hundreds of similar places, from Nevada to Georgia, Pennsylvania to Arizona, and on what was a warm, sunny November 7th in the nation’s capital they emphatically denounced the revanchist horror of the previous administration – the racism, misogyny, homophobia, antisemitism, xenophobia. They cast out the gargoyles who have been enabled in this administration, like Stephen Bannon, Stephen Miller, and Sebastian Gorka. They rejected the forced family separations, the anti-Muslim religious bans, the affection for dictators, the genocidal lack of response to a pandemic that’s killed a quarter of a million Americans.

In the process they demonstrated that, for the time being, American democracy survives for another day. More than confirmation of American institutions – which have been weakened, but still hung on – it’s a confirmation of the American people (or at least of a slightly larger half). This victory doesn’t erase those years, just as it doesn’t change what happened in Washoe, Chatham, or Philadelphia Counties centuries ago, but it speaks to how our history is a palimpsest, with triumph built upon tragedy, over and over again. It speaks to the potential for change, the potential for progress, the potential for hope. Ultimately November 7th isn’t about the thankful and welcome election of former Vice President Joseph R. Biden as the 46th President of the United States, but rather it’s about all of us, those (largely Black and brown) voters in Washoe, Chatham, and Philadelphia Counties who, despite institutional and systemic hurdles, were able to wrest the nation away from the course of incipient authoritarianism, and in the process provide the world with a glowing space of possibility for how genuine people power can still reject tyranny.

The 21st century has seen a growing movement of extreme right-wing illiberalism, a neo-fascism ensconced from Ankara to Budapest. Russian dissident and New Yorker contributor Masha Gessen writes in Surviving Autocracy that such governments are akin to “mafia states,” which “proceed in three stages: autocratic attempt, autocratic breakthrough, and autocratic consolidation.” Such a process has been repeated throughout the formerly democratic world; this week the United States halted our dangerous course before it could metamorphose into the final stage, and so the new illiberal authoritarianism suffered its most spectacular defeat. Jair Bolsonaro has ruled Brazil since 2018, Recep Tayyip Erdogan has been President of Turkey since 2014, Narendra Modi has consolidated his power in India since 2014, Viktor Orban has been Prime Minister of Hungary since 2010, and Vladimir Putin has increasingly governed Russia as a Czar since 2000, and tonight all of them are sleeping a bit less soundly.

For that matter so are the fully domestic manifestations of this illiberalism, this neo-fascism, who were enabled and encouraged by the Trump administration only to witness the largest single group of votes in U.S. history go to his opponent, propelling him into the White House despite the antidemocratic nature of the Electoral College. Many things are notable on this historic day, but what shouldn’t be ignored is that this is the most spectacular repudiation of the new authoritarianism that had been enveloping the world, accomplished in the most powerful and oldest democracy and through electoral means. That the agents of their defeat are Biden, who served as a loyal Vice President to this nation’s first Black president, and Senator Kamala Harris, who will be our first woman Vice President, our first Black Vice President, and our first Indian-American Vice President, only speaks to the profound joy of this moment.

Celebrate today for there is work tomorrow. Vice President Biden and Senator Harris received more votes than any other campaign in history. The second highest number? Those received by Trump this election. Millions of Americans were witness to the panoply of cruelty which marked the last half-decade – the concentration camps for refugees, the ICE agents acting with unconstitutional impunity, the mocking denialism of the coronavirus pandemic – and they whole heartedly begged for more. Such voters can no longer feign ignorance what a Trump administration would do, and we remain more divided now than at any point since the Civil War. The trends of which Trump was a symptom (rather than the simple cause) disturbingly remain. Inequity, corporatization, dominionism, neoliberalism, nationalism, white supremacy, and so on, remain as a many-headed hydra. Reasons abound to be worried that Vice President Biden’s innate centrism may limit solutions to these problems; that a desire for unity, or for a “normalcy” which has long since been nullified will render a caution that doesn’t rise to the struggle of this age.

If this worries you, then take some solace in the knowledge that Vice President Biden won’t have a choice but to rise to this occasion. There is no going back to normalcy, no matter how much moderates and centrists may pray that there is. If Trump gifted us anything, it was the strange curse and blessing that norms don’t need to exist simply because they always have. We shall return the favor, for I don’t anticipate a government funded Trump library, a Trump portrait in the White House, a Trump stamp, and certainly not his attendance at the inauguration. Perhaps this all seems like meaningless symbolism, but what it actually will be is an acknowledgement of the full damage of the Trump administration, and it will prevent the grotesque rehabilitation of villainy which American culture and media too often excels at. Donald Trump will not have a post-presidential career charming people with paintings of dogs and babies – he’s incapable of it. That’s to our benefit. Such honesty will do us all well as we take on the long and necessary struggle of expelling those devils from our national psyche.

I also can’t help but feel a bit of hope, for at the very least Biden’s goodness and decency (not to mention his painful and conversant fluency in the language of grief and mourning, which is also what is needed right now) speak to an unequivocal victory, as does the President-Elect’s ability to change and admit past error. To have a president who is a good man will feel radical. Sometimes there is an undervaluing of presidential rhetoric as merely platitudinous, but if Trump has (ironically) proven anything, it’s of the power of words, for his garbled and toxic brew of prejudice, invective, narcissism, and cruelty – which was directly responsible for the rise in hate crimes and the threat of domestic terrorism – altered this country’s spirit in ways that will take a long time to heal. To listen to Senator Biden’s victory speech is to remember an alternative manner of leadership, a dignified and empathetic manner of leadership, which we had been on the verge of forgetting. Now of course begins the work of holding President-Elect Biden accountable from the left, as is the noble job of democracy.

But first, with the emotions of this beautiful day still fresh, let us hold close to our hearts a hopeful image. People are dancing in the streets of New York and Philly, bells are ringing out in Paris and Berlin, fireworks erupted over the skies of London, a world celebrating an idea that many had feared was dead. This is the antidote to Trump’s rallies, where he whips his followers into a frenzied trance. It is rather what Barbara Ehrenreich describes in Dancing in the Streets: A History of Collective Joy as what “we need more of on this crowded planet, to acknowledge the miracle of our simultaneous existence with some sort of celebration.” Such spontaneous, collective, autonomous celebration is – in its fraternity, its liberty, its ecstasies, and its joys – not the promised future, but it is a glimpse of it.

It’s hard to pick a nadir of these past four years, but when Trump had peaceful protestors gassed in Lafayette Square so that he could march over to St. John’s Episcopal Church (against the wishes of its clergy) and hold up a Bible as part of a propaganda campaign is certainly a notable low. On November 7 in what the local government of Washington D.C. has rechristened Black Lives Matter Plaza there was no gassing of citizens, there was no clubbing of protestors, there were no fascist photo opportunities. Rather there were women and men of all races, ethnicities, sexualities, genders, and faiths singing, dancing, and exorcizing that malignant spirit who occupied this space, for a bit.