Can the COVID Crisis Create a New Civilian-Military Trust in Argentina?

Dr. David M. K. Sheinin is professor of history at Trent University (Canada) and a member of the National Academy of History of the Argentine Republic. His next book, co-edited with Benjamin Bryce, is Race and Transnationalism in the Americas, forthcoming from the University of Pittsburgh Press in 2021.

Cesar R. Torres is professor at SUNY Brockport (USA) and a fellow in the National Academy of Kinesiology. His most recent book, co-edited with Antonio Sotomayor, is Olimpismo. The Olympic Movement in the Making of Latin America and the Caribbean (The University of Arkansas Press, 2020). 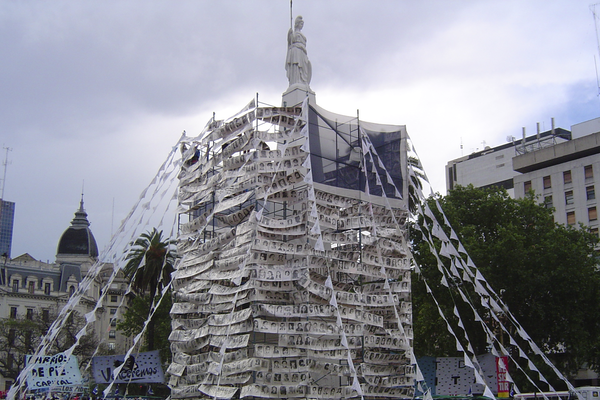 It haunts us still. Almost forty years have passed since Argentines reclaimed democracy from their last military government. Yet, the spectre of dictatorship persists. Trials of alleged human rights abusers from the 1976-83 period continue apace. In late October, Argentina registered 30,000 COVID-19 deaths. On that occasion, to a torrent of social media admonitions, the journalist Eduardo Feinmann invoked the 30,000 civilians killed by the last dictatorship to compare what he views as the disastrous handling of the pandemic by the current Argentine government to the horrors of military rule. And in late August, former president Eduardo Duhalde warned that the current Argentine political and economic crisis might lead once again to a coup d’état. Then, in October, he declared that the country was “in a pre-anarchic process.”

Argentine democracy is among the most vibrant anywhere, providing a dynamic forum in which the most pressing social and political problems are debated openly, from equal rights for LGBTQIA+ people to abortion rights. Why, then, is the country still making constant and pained reference to a dictatorship that ended almost forty years ago?

In part, the answer rests in an affliction common to many polities today, the growing divisions between political movements on the left and right, and the heightened alarm that has generated on all sides. But more important, despite dramatic changes in Argentine military cultures over the past forty years, people remain uneasy that the Armed Forces have found no post-dictatorship role in civic life. They remain caught in time, unable to shake their legacy of state terror.

It wasn’t always like that. A hundred and fifty years ago, the Armed Forces occupied a crucial place in the development of civil society. In 1870-71, Argentina faced an unprecedented public health threat. A Yellow Fever epidemic killed thousands. Under the direction of the federal government, and working with civilian public health officials, the Armed Forces successfully advanced a rapid and multifaceted response to the crisis. During the War of the Triple Alliance (1865-70), the Army public health service operated an extensive network of clinics and medical stations behind the front lines of its conflict with Paraguay. At the end of the war, that military presence and expertise in rural areas was quickly adapted to the spread of Yellow Fever with Army personnel treating large numbers of infected civilians. The Army sent physicians to Corrientes province to tend to those in impoverished villages without other access to medical care. The Navy closed Argentine ports to ships from Paraguay to stop the potential arrival of infected passengers. And from April 12 to May 15, 1871, the Army maintained a quarantine declared by civil authorities in Buenos Aires.

One of dozens of Army physicians sent to infected zones, Caupolicán Molina was both the principal surgeon of the Army and the chief of sanitary services for the city of Buenos Aires. Responsible for hundreds of patients, Molina died of the fever in 1871. Born in 1795, Francisco Javier Muñíz also represented the fluidity of interaction between civil and military authorities. As a disciple of the physician Cosme Argerich, founder of the Military Medical Institute, Muñíz graduated as a military surgeon and Army officer. He attended to the wounded during Argentina’s war with Brazil (1825-28) and during the War of the Triple Alliance. In 1828, based in the town of Luján (Province of Buenos Aires), he treated both soldiers and civilians in a peacetime setting. At the same time, he conducted geological and paleontological studies in the area, worked on a cure for Scarlet Fever, and wrote books on regional vocabularies and the ñandú (Patagonian Ostrich). In 1870, at seventy-five years of age, he volunteered to help combat the epidemic. A year later, while treating both civilian and military patients, he died of the disease.

The relationship between the Armed Forces and civil society changed dramatically at the end of the nineteenth century with the consolidation of the nation state. In contexts of social unrest and political uncertainty, the military began to intervene in politics, leading to the first modern coup d’état in 1930, which ushered in half a century of increasingly violent military overthrows of civilian rule. Beginning with the return to democracy in 1983, Argentines became firmer in their rejection of military intervention in governance as anathema to core principles of civil society and democratic rule. Pilloried since the 1980s for their abuse of power and crimes during the dictatorship, in the 1990s the Armed Forces saw their power base weakened by sharp salary reductions for officers and the privatization of weapons plants under their control. Today, legislation blocks the Armed Forces from undertaking internal security-related functions. Soldiers play an outsized role in United Nations peacekeeping missions and are trained in domestic and international human rights law. But figuratively and literally, except for rare ceremonial occasions, they have been confined to the barracks – until now.

Could the armed forces’ fight against the 1871 Yellow Fever epidemic, in a manner that dovetailed with civil society public health initiatives, serve as a model for a renewal of military functions in Argentine society? It bears noting that the Argentina of 1871 was no democracy and that while Armed Forces physicians were fighting the virus in rural clinics, the Army was launching a series of brutal military campaigns to destroy First Peoples.

But in the current pandemic, we have a glimpse into the parameters of the possible. Without great fanfare or reference to 1871, beginning in April 2020, Defence Minister Agustín Rossi has ordered the military into dozens of operations to mitigate the impact of COVID-19. In a massive campaign, Hercules aircraft transported emergency medical supplies to Córdoba province, carried Army nurses to Neuquén province, and delivered respirators to multiple destinations.

It’s too early to tell, but perhaps COVID-19 might have a positive impact over the medium term to balance, if only in small measure, the enormous destruction of the new coronavirus. The first vast military infectious disease-related initiative since the Yellow Fever epidemic may allow for imagining a reintegration of the Armed Forces and civil society, giving Argentina a renewed opportunity to come to terms with its past dictatorship while reaffirming its repudiation of longstanding militarist fantasies of power over civil society.