David Marks is a writer and philosopher whose focus is applied ethics. He is also a veteran documentary filmmaker, having produced a number of investigative films for both the BBC and PBS, including Nazi Gold, dispelling the myth that Switzerland was neutral in WWII. Information about his new book, The Way, an interpretation of Lao Tzu’s Tao Te Ching, is available at LaoTzu-TheWay.org. 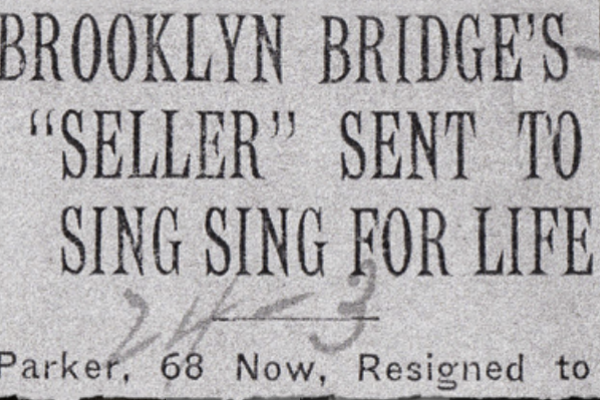 There’s a well-known saying that originated in New York, presented to challenge someone’s naiveté: If you believe that, I have a bridge to sell you. Many people are unaware that the expression became popular because a con artist actually made a fortune selling the Brooklyn Bridge to unsuspecting marks.

Around the dawn of the 20th century, impostor George C. Parker was able to repeatedly sell the iconic span between Manhattan and Brooklyn, sometimes twice in one week. He specialized in the marketing of a number of New York monuments, including Grant’s Tomb and the Statue of Liberty.

Methodical in his grandiose schemes, he presented unwitting buyers elaborately forged deeds to public property. Some only realized they’d been swindled when attempting to erect a toll booth to charge pedestrians; the police interceding and ending their brief delusion. Parker cheated people in small and large ways for decades.

The duplicitous can lie with a smile on their face.The self-righteous, deluded, bullying loudmouth who has no other care but his own fortune and aggrandizement is secretly concocting sinister plans. When he is not smooth talking, he is vulgar and abusive, mocking and degrading those who he would steal from.

Grifters who gain the confidence of the innocent are usually narcissistic deceivers, enticing their prey in a cloud of self-righteousness. The desperate or gullible don’t realize what they are about to lose until their valuables are gone.

The scammer and his felonious cronies conspire to steal by deception. Cons depend on pretending to offer what they can never deliver. The most cunning are able to fool the personnel at small and large businesses, including banks. Sometimes they run for public office.

Cons persevere, finding victims willing to embrace their seductive fabrications. They believe they never will be caught. But occasionally, these clever thieves are apprehended and prosecuted for their corrupt operations.

Parker was a popular figure with those who were oblivious to the impact of his darkest deeds. And cons seem attractive and entertaining even when we don’t believe them. But nefarious crimes should remind us that the consequences of thievery, small and large, are both economically and emotionally traumatic. The law eventually caught up with Parker, and he spent his final years in Sing Sing prison for multiple fraud convictions.

Cons are recognizable once you know their ilk. And New Yorkers know their own best. From the small time crook on the street to a racketeer in a high-rise office, there is a ruthless class of character from New York who stands out like a sore thumb. We know a lying huckster when he appears and want nothing to do with this black hole of a human.

Parker was a novice compared to Donald Trump.

Trump’s devious enterprises, both during his term as president and in the years before he held office are much grander and complex. His appeal and behavior fooled millions of people, enough to gain him the presidency, making him one of the greatest hustlers of all-time.

Trump’s chicanery as a real estate and casino magnate — and his tough guy TV image — presented the classic caricature of a con, including his legacy of causing pain and devastation. There are literally thousands of examples of his scurrilous behavior.

As with the rest of his lot, the details of how he operates are much more revealing than anything he says.

The recent revelation of Trump’s Chicago skyscraper fiasco is a window into a world where he manipulates a financial situation in his favor, with whatever it takes. When he couldn’t pay back the loans taken out for the seven hundred million dollar project, he sued Deutsche Bank for predatory lending practices. The bank counter-sued and eventually agreed to a settlement greatly favoring Trump. The cancelled debt was taxable; the details of how he evaded paying these taxes are just part of the reason he has legal problems on the horizon.

Trump’s con of the banking industry has a repeating pattern. He defaults on huge debts and then either declares bankruptcy or looks for any angle to reduce or eliminate the responsibility for the millions he owes. When at risk, caught or cornered, he takes outrageously antagonistic measures to weasel his way out of trouble.

Trump’s involvement in over 3500 legal cases throughout his business career, before becoming president, reveals that his intentions and their effects are at a minimum, contentious, and certainly a great burden on those involved.

Having a new powerful office provided the leverage to raise the heinous level of his con. And it took Trump’s rise to the presidency to finally end his relationship with the city that knows him for who he is. He claimed he rejected New York, but well before his decision to call Palm Beach his residence, most people from his home town had enough of his lies. His new national pulpit amplified his bluster and confidence, destroying all possibility of staying connected to the community that once tolerated him.

When he felt he had extracted all he could from the city, and was no longer welcome, Trump packed his bags, figuring his illicit trade in Washington was more lucrative. He realized after attaining the highest office in the land, the majority of his fellow New Yorkers saw him as the consummate con man, and he attempted to cut his losses.

Trump’s con is beginning to unravel, particularly in his former home. Both the district attorney of New York City, Cyrus R. Vance, Jr., and the attorney general of the State of New York, Letitia James, are looking into a number of illegal matters that will lead to indictments of Trump and his corrupt organization.

The concept of fraud minimizes the depth of his alleged criminal activities. No amount of legal delays, arm twisting, bribes or federal pardons will protect him from the prosecutions that will come. He will eventually be forced to return to a place that will shine a bright light on the truth.

With a suite in Sing Sing awaiting him, the president has been highly motivated to say or do anything to hold on to the protections of his office to avoid a legal and personal nightmare. But he has burned his bridges, and many of his Washington facilitators are starting to act like they never knew him. His frantic push to save himself is futile; his house of cards is about to fall.

Trump’s facade is crumbling; his true persona grows nakedly apparent to a wider circle. He is the self-described woman-grabbing misogynist, the wily operator who paid less taxes than a fireman in the year he was elected, the mean-spirited racist bully who makes fun of the disabled, the classic hypocrite who, in the name of protecting American values, oversees the separation of immigrant parents and their children, and the false patriot who incites violence and civil unrest while demeaning members of the armed forces. Above all, he is the lying swindler whose priority remains lining his pockets as a deadly pandemic surges and the world faces an unprecedented environmental catastrophe.

Trump convinced his victims that he could provide security from an imagined demon, solely to con them for their votes. He relentlessly appealed to their emotions, threatening that any opponent would ruin their lives; he promised things he could never deliver. He’s the seller of a phony cure for his exaggerated, deteriorating vision of the country. His fear-mongering, hate-inciting presidency and re-election campaign only further revealed his despicable nature.

The damage Trump has done to the United States has yet to be fully appraised.

He managed to con almost half of all Americans in the recent election and there are still people who believe him. But Trump’s supporters will eventually realize that they voted for a man who despises them. However slowly, an increasing number of people are recognizing who he really is; his game is over. There is no such thing as Trumpism, only degrees of how deeply he was able to con his entranced followers.

Like the rest of his deplorable breed, Trump is only a taker; he has nothing to give. His lifetime of deception and bitter conflict, with an increasing number of enemies, will bring him down.

With his confidence scams falling apart and his world in a tailspin, he is predictably saying the election was stolen from him, ramping up his hostile and abusive rhetoric, and furiously claiming he is a law-abiding and righteous citizen maligned by his enemies.

Trump still insists he has been an inspiring and great leader of the United States.

If you believe that, I have a bridge to sell you.