Jim Sleeper is a writer on American civic culture and politics, the author of The Closest of Strangers and Liberal Racism, and a member of Dissent’s editorial board. 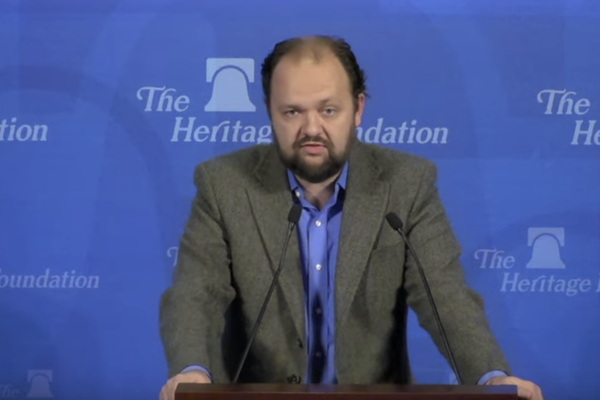 Five years ago I diagnosed the New York Times conservative columnist Ross Douthat's affliction by what I playfully dubbed “Ideological Displacement Syndrome” (IDS) –  in his case, a seemingly irrepressible drive to accuse liberals and the left of carrying dictatorial impulses that he somehow couldn't find in his own supposedly beleaguered, underdog conservative movement and Republican Party.

Now, like some other longtime Republican loyalists, Douthat has acknowledged that Trump is feckless and reckless and that some rightists get out of hand, too -- but not as dangerously, he still insists, as liberals and progressives, who he claims are even more powerful and dangerous than Trump.

He said so on October 19, writing under the headline, “Where Liberal Power Lies." But this kind of “blame the liberals” thinking --  ‘IDS’ to the max -- is worth contextualizing, because not only Douthat but also many others have been its carriers, on the left as much as on the right. At this moment, in a column portentously (pretentiously?) headlined, "The Last Temptation of Never Trump," Douthat is trying to wiggle out of the grip of what he calls his "right-wing id." But he still exemplifies how people who think ideologically succumb to delusions and twist hard realities, all the more so when they’re straining for trans-ideological omniscience.

In a 2015 column condemning the satirical (and, yes, reckless) French magazine Charlie Hebdo for mocking Muslim reverence for the prophet Mohammed, Douthat rebuked the slain cartoonists for having harbored “progressivism’s present confidence (even in the face of murder) in its prescribed hierarchies of power and victimhood…” In the space of just 830 words, he accused “the western left,” “the contemporary left,” “today’s progressives,” “contemporary progressive” thinking, “idealistic and progressive-minded figures,” and “progressivism’s present confidence,” and “today’s progressivism" of fomenting crises that were driven far more often by excesses of the right about which he was silent.

And just recently, in an October 11 Times column, he announced that “There Will Be No Trump Coup.” He presented Trump as “weak” and “ranting,” but no more so than “liberals” who “have spent the last four years persuading themselves that their position might soon be as beleaguered as the opposition under Putin, or German liberals late in Weimar.“ He even insisted that liberalism under Trump “has become a more dominant force [his italics], with a… monopoly in the commanding heights of culture. Its return to power in Washington won’t be the salvation of American pluralism; it will be the unification of cultural and political power under a single banner.” Against these proto-totalitarian dangers, Douthat assured us, our “infected-by-COVID chief executive is not plotting a coup, because a term like ‘plotting’ implies capabilities he conspicuously lacks.”

Maybe so. Maybe this election is on a precipice not because Trump has grand, authoritarian reasons for subverting it but because, as the historian Timothy Snyder shows devastatingly in the liberal Catholic journal Commonweal,  Trump is obsessed with escaping the legal and economic ruin that awaits him personally if he loses presidential immunity. In his (and much of the country’s) manic state, he may indeed derail the election, in effect pulling off a coup, absurdly but decisively, with more than a little help from the Republican Party.

But Douthat, too, is obsessed: Although he concedes that “[t]he threat of far-right violence is certainly real” (often enough at Trump’s suggestion), he writes that “America’s streets belong to the anti-Trump left” – a delusion dramatized memorably by Rudy Giuliani in his speech to this year’s Republican National Convention.

I’d like Douthat to assess Rudy’s rant but also to respond to NBA basketball coach Doc Rivers’ almost-plaintive, at one point tearful, lament after he’d watched the Republican convention:

“All you hear is… all of them talking about fear,…. We’re the ones getting killed…. [We] protest…. They send people in riot outfits. They go up to Michigan with guns….  [but] Nothing happens…. My dad was a cop. I believe in good cops…. It’s amazing why we keep loving this country, and this country does not love us back. It’s really so sad. [I]f you watch that video, you don’t need to be black to be outraged. You need to be American and outraged.”

Douthat isn’t outraged, not even by his claim that the streets belong to the anti-Trump left. He’s almost insouciant about the riot cops, the military in Lafayette Square, the police murders of unarmed young Black people, and the militias with assault rifles converging on state capitols. He seems insulated from it all by his oft-expressed faith that the only escape from this fallen world of ours is on your knees, eyes heavenward, while serving techno-capitalism: His book The Decadent Society ends with precisely that admonition: “So down on your knees — and start working on that warp drive.”

The faux-brotherly, faux-humorous second phrase seems intended to ease our submission to the first by affecting a characteristically American, bro-ish fondness for technology. Never mind that liberal pluralism -- not today’s conservatism, let alone corporate governance -- protects Douthat's right to propound his beliefs and prevents him or anyone from imposing them on others.

In 2009, Douthat paid wiser attention to precincts less heaven-bound, in his and Reihan Salam’s book Grand New Party: How Republicans Can Win the Working Class and Save the American Dream (which I reviewed half-approvingly for Commonweal).  But since then, he and others, of many faiths, have drifted away from loving America as Doc Rivers has tried to love it: for ordinary Americans’ untiring, uplifting efforts to sustain a democratic, pluralist, economically sane alternative to authoritarian religiosity that accommodates itself to Trump or to authoritarian leftism that would impose “the unification of cultural and political power under a single banner.”

Excuse me, but isn’t “the unification” of cultural and political power what Douthat, Amy Coney Barrett, the late Antonin Scalia, and crypto-authoritarian thinkers such as Adrian Vermeule have been urging upon us? Doesn't Douthat's disdain for Trump disguise his own inclinations to such thinking? Even those of us who agree that America is in trouble partly because its liberalism has a hole in its soul  aren’t inclined to fill it by wearing holes in the knees of our jeans while working on our warp drives mainly for the benefit of plutocrats and their apologists.