Carlton F.W. Larson is a Martin Luther King, Jr. Professor Law at the UC Davis School of Law.  He is the author of On Treason: A Citizen’s Guide to the Law and The Trials of Allegiance: Treason, Juries, and the American Revolution. 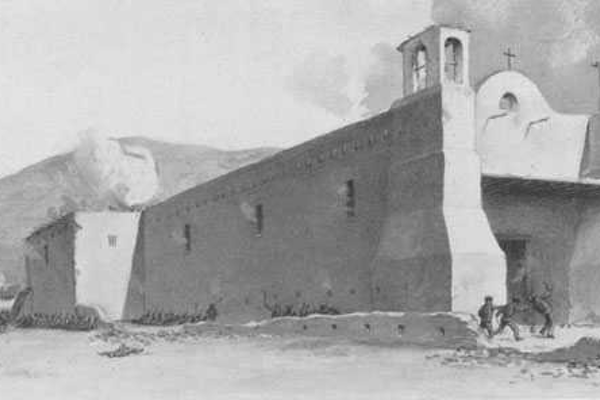 In 1847, in a dusty plaza in Taos (now part of the American state of New Mexico), American authorities tried and executed a thirty-nine-year-old man named Hipolito Salazar for treason against the United States.  He is the only person ever executed for this crime since the adoption of the United States Constitution.  His story has faded into almost complete obscurity, but it tells us much about American national identity and whom we are willing (and not willing) to execute for acts of national betrayal.

According to the solemn declarations of judicial opinions and legal treatises, treason is the highest crime in American law, worse even than murder.  Legal historians, however, know that such statements should not be taken at face value; the law in action is often quite different than the law stated in the books.

Since the late eighteenth-century, America has executed thousands of people for murder, but only a minuscule number for treason.  In addition to the Salazar execution, a small handful of people were executed as traitors to the individual states during the American Revolution, and John Brown and Edwin Coppoc were executed for treason against Virginia in 1859 for their role in the raid on Harpers Ferry.

If murder was committed far more frequently than treason, this disparity would be unremarkable.  In most years, treason is indeed rare.  But in a handful of turbulent years, treason has been widespread.  Although precise data do not exist, is it clear that tens of thousands of Americans have committed treason.  During the American Revolution, thousands of people sided with the British and committed acts that brought them within the technical scope of state treason laws.  The largest number of offenses came during the American Civil War.  All the members of the Confederate military, along with any person who provided them aid and assistance, committed the crime of levying war against the United States.

But the Civil War did not lead to any treason executions, and there were very few during the American Revolution (many prosecutions failed because juries refused to convict, and where convictions were obtained, governors usually granted clemency).

So the disparity between treason and murder executions must be explained by other factors.  Two are particularly salient.

First, treason has generally been perceived as a political crime, not an individual crime of violence, even if it involved fighting as a soldier in the enemy’s military.  This was particularly true during the Revolution, when almost everyone knew someone—a friend, a neighbor, a relative—who had chosen the other side.  Such people were not incorrigible criminals, but ordinary Americans who could easily be welcomed back as productive members of society once the conflict was over.  Treason, in short, could be forgiven, whereas murder could not.

Second, conflicts like the Revolution and the Civil War would have been even more horrific if a wave of executions had followed on their conclusion.  Once the war was over, the primary goal became national reconciliation, welcoming back fellow Americans who had laid down their arms.  There was little appetite for further bloodshed, or for the creation of martyrs around which disaffected individuals could rally for generations.

All of which suggests that something distinctive was happening in that plaza in Taos in 1847.  Until the publication of my book On Treason: A Citizen’s Guide to the Law, his case was entirely unknown to American treason scholars, who insisted that no such executions had occurred (and I include myself in that same category, having only learned of Salazar’s case in 2019).

“Distinctive” would be an understatement.  In 1847, New Mexico did not belong to the United States, but to Mexico.  It would not be formally transferred to American jurisdiction until the 1848 Treaty of Guadalupe-Hidalgo.  Hipolito Salazar was a Mexican citizen who had never set foot in the United States.  As such, he owed no allegiance to the United States and could not be lawfully prosecuted for treason against it.

Taos would later erupt in violent resistance.  The “Taos Revolt,” as it came to be called, was eventually suppressed by the American military, but American officials were determined to place the surviving leaders on trial.  Some were charged with murder, some with treason.  Of the treason defendants, Salazar was the only one who was convicted and executed.

As word of these trials seeped back to Washington, DC, many members of Congress responded with horror—why were American officials trying Mexican citizens, on Mexican soil, for the crime of treason against the United States?  The Polk Administration was forced to concede that the treason indictments had been issued in error.  Since New Mexico had not yet been formally ceded to the United States, treason was an inappropriate charge, and Salazar’s conviction was legally invalid.  But administration officials argued that this was a mere technicality—Salazar was basically a murderer who deserved to die, and whether the charge was treason or murder, he had received his just deserts.

Curiously, the same argument could potentially have been made eighteen years later, in the aftermath of the Civil War.  The Confederates could have been viewed as murderers, attacking American forces in the same way as had Salazar and his men.  But no one referred to the Confederates in this manner.  They were once and future Americans, part of the political community who had made a political mistake, but who could be welcomed back with open arms.

Salazar, by contrast, had never been an American; he had always been an outsider, perceived to be racially different.  And that fact, perversely, made him far more susceptible to execution for treason against the United States.  His offense could be casually compared to murder, in ways that other forms of treason would not.  And as a quasi-murderer, execution was entirely appropriate.

At the gallows, Salazar complained bitterly about the unfairness of his trial.  As the platform was about to drop, he uttered his last words, perfectly capturing his outsider status: “Caraho, los Americanos!”  Or, in English, “F--- the Americans!”

It is not a story that is recounted in our textbooks, but it should be.  It reveals much about who counts, and who doesn’t, in dealing with crimes of betrayal.  White Americans who waged war against their country and killed thousands other Americans in defense of race-based slavery were forgiven and allowed to return to their regular lives.  By contrast, the only person to die for betraying America was not even an American at all, but a Mexican defending his homeland. In this case, as in so many others, the law in action leaves much to be desired.