Fear of the "Pussification" of America: A Short Cultural History

Gregory A. Daddis is a professor and the USS Midway Chair in Modern U.S. Military History at San Diego State University and author of the forthcoming book Pulp Vietnam: War and Gender in Cold War Men’s Adventure Magazines. 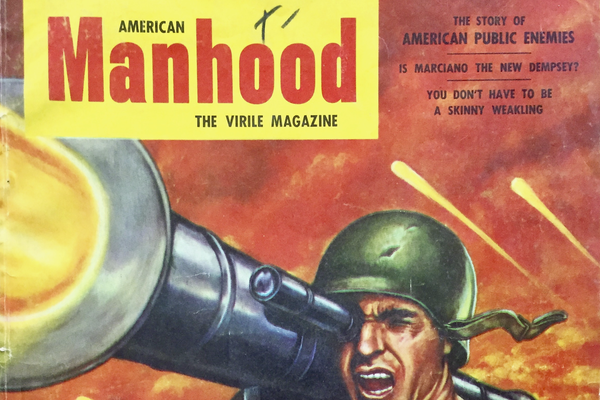 Of all the responses to the COVID-19 pandemic in the United States—ranging from debates over mask wearing to school closings— perhaps the most bizarre is the suggestion that this deadly disease can be avoided simply through manliness.

Nowhere was this made more explicit than when former US Navy Seal Robert O’Neill shared a photo of himself, unmasked, on a Delta Airlines flight. “I’m not a pussy,” declared O’Neill on Twitter, as if to suggest that potent, masculine men, like those on Seal Team 6, would not be cowed into wearing cowardly protective gear (Never mind that a passenger sitting one row behind O’Neill, in a US Marine Corps baseball cap, was wearing his mask). 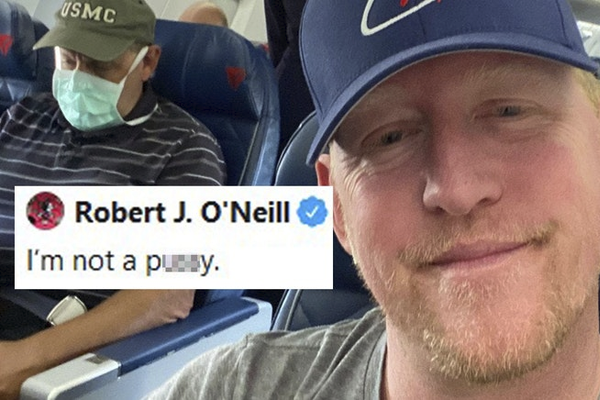 O’Neill’s use of the “P-word” was far from an outlier; in fact, it has been employed near and far in recent months. Adam Corolla stoked public outcry only weeks later when he maintained, incorrectly, that only the “old or sick or both” were dying from the virus. “How many of you pussy’s [sic] got played?” the comedian asked.

Nor were these remarks limited to COVID-19. Not to be outdone by such repugnant rhetoric, President Donald Trump—who elevated the word during the 2016 presidential campaign for other reasons—reportedly lambasted senior military leaders, declaring that “my fucking generals are a bunch of pussies.” On the opposite end of the military chain of command, 2nd Lt. Nathan Freihofer, a young celebrity on TikTok, recently gained notoriety for anti-Semitic remarks on the social media platform. “If you get offended,” the young officer proclaimed, “get the fuck out, because it’s a joke…. Don’t be a pussy.”

What should we make of these men, young and old, employing the word as a way to shame potential detractors? Perhaps the most telling, and least surprising, explanation is that sexism and misogyny are alive and well in Trump’s America. Yet it would be mistaken to argue that the epithet has regained popularity simply because the president seemingly is so fond of the word. Rather, such language—and more importantly, what it insinuates—is far from new.

In July, after Alexandria Ocasio-Cortez (D-NY) was verbally accosted on the Capitol steps by fellow representative Ted Yoho (R-FL), the congresswoman delivered a powerful speech on the House floor. The problem with Yoho’s comments, Ocasio-Cortez argued, was not only that they were vile, but that they were part of a larger pattern of behavior toward women. “This is not new, and that is the problem,” she affirmed. “It is cultural. It is a culture of lack of impunity, of accepting of violence and violent language against women, and an entire structure of power that supports that.” 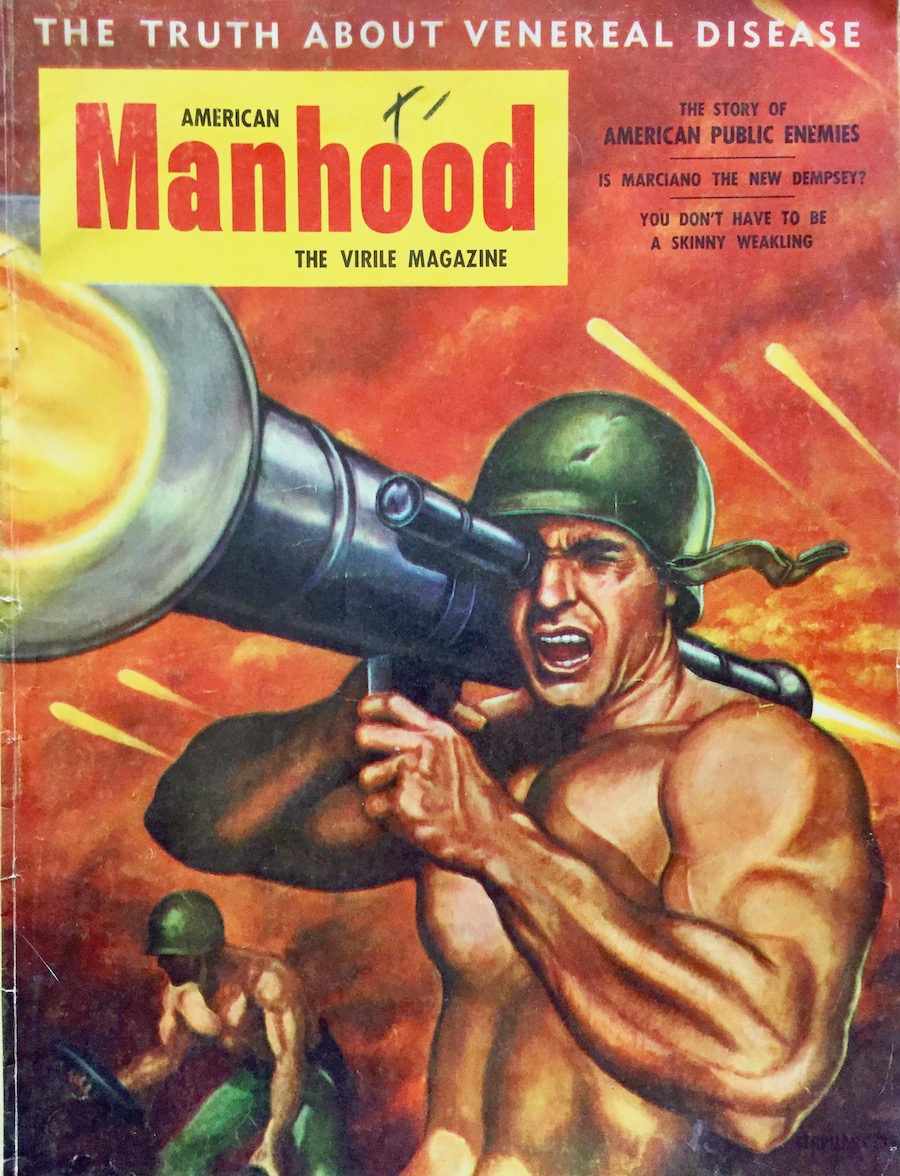 Take, for example, an illustrative story from the March 1963 issue of Brigade. In “Castration of the American Male,” pulp writer Andrew Petersen decried how the “manly virtues—strength, courage, virility—are becoming rarer every day…. Femininity is on the march,” Peterson claimed, “rendering American men less manly.” To put a finer point on the message, Brigade included with the article a photograph of a sullen husband, in floral apron, doing the dishes. The message seemed clear. The masculine ideal of sexual conqueror and heroic warrior, touted in nearly every issue of the pulps, was under assault. 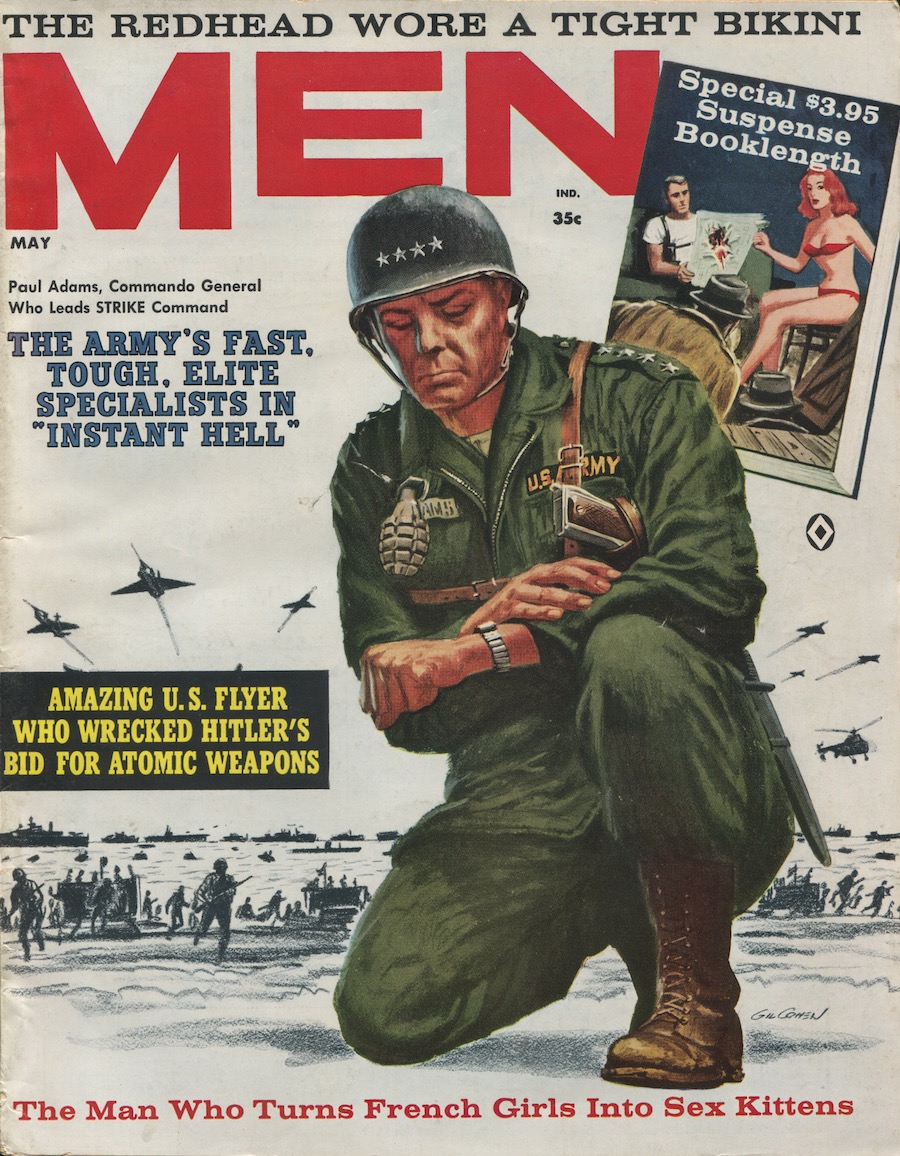 Indeed, in Cold War men’s adventure magazines, “real men” were never “pussies.” They courageously defeated former Nazi henchmen and evil communist infiltrators. They exposed femmes fatale who were engaging in “sexological warfare,” using their physical bodies as weapons of war. And they seduced women across the globe, one navy vet describing himself in the pulps as a virile “bedroom commando.” 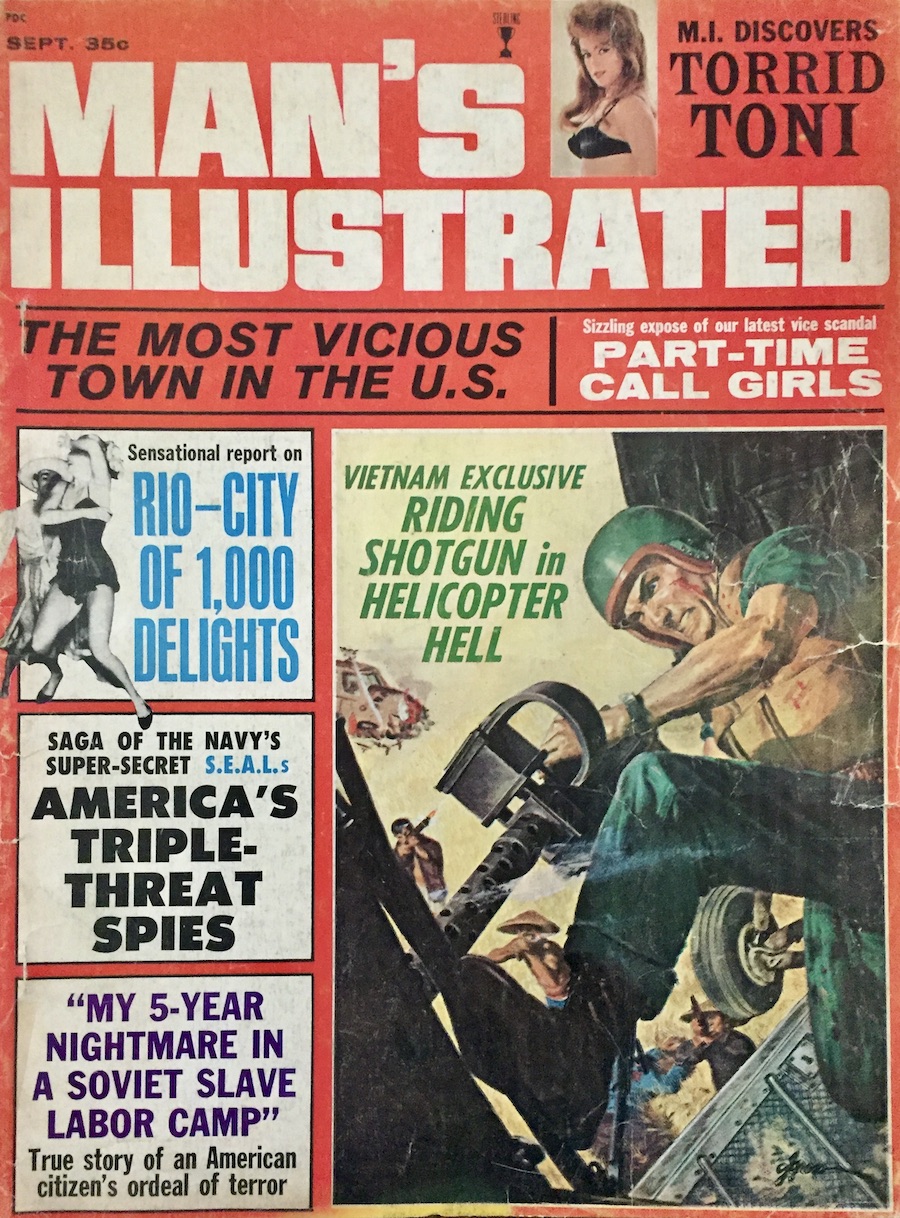 Yet just below the surface of these hypermasculine narratives, a subtext of anxiety loomed. Read a different way, the pulps might also be seen as a form of escapism from deep anxieties about not measuring up in a rapidly changing postwar society. Fears of being emasculated by Cold War suburbia and a consumeristic society pervaded these men’s magazines. Pulp writers, as seen in the Brigade article, habitually expressed concerns over American men becoming “soft.”

Arguably, these fears of losing one’s masculinity engendered not only hostility toward women but spawned a backlash against those supposedly “weak” men who weren’t holding the line against supposedly aggressive feminism. As Betty Friedan argued in The Feminine Mystique (1963), male outrage was the result of an “implacable hatred for the parasitic women” who apparently were denying husbands and sons a more vigorous, manly lifestyle.

The Vietnam War, at least in the pages of men’s magazines, seemed only to widen the gap between “real men” and their “pussy” compatriots. Saga lashed out at members of the “new left” and the blatant “draft dodging underground” taking hold on college campuses. Man’s Illustrated condemned the “cardburners” and “slackers” who had worked the system to stay out of uniform. One antiwar activist recalled hearing epithets of “faggots” and “queers” as often as “commies” or “cowards.” In the pulps, the best American men went to war, while the weaklings stayed home. 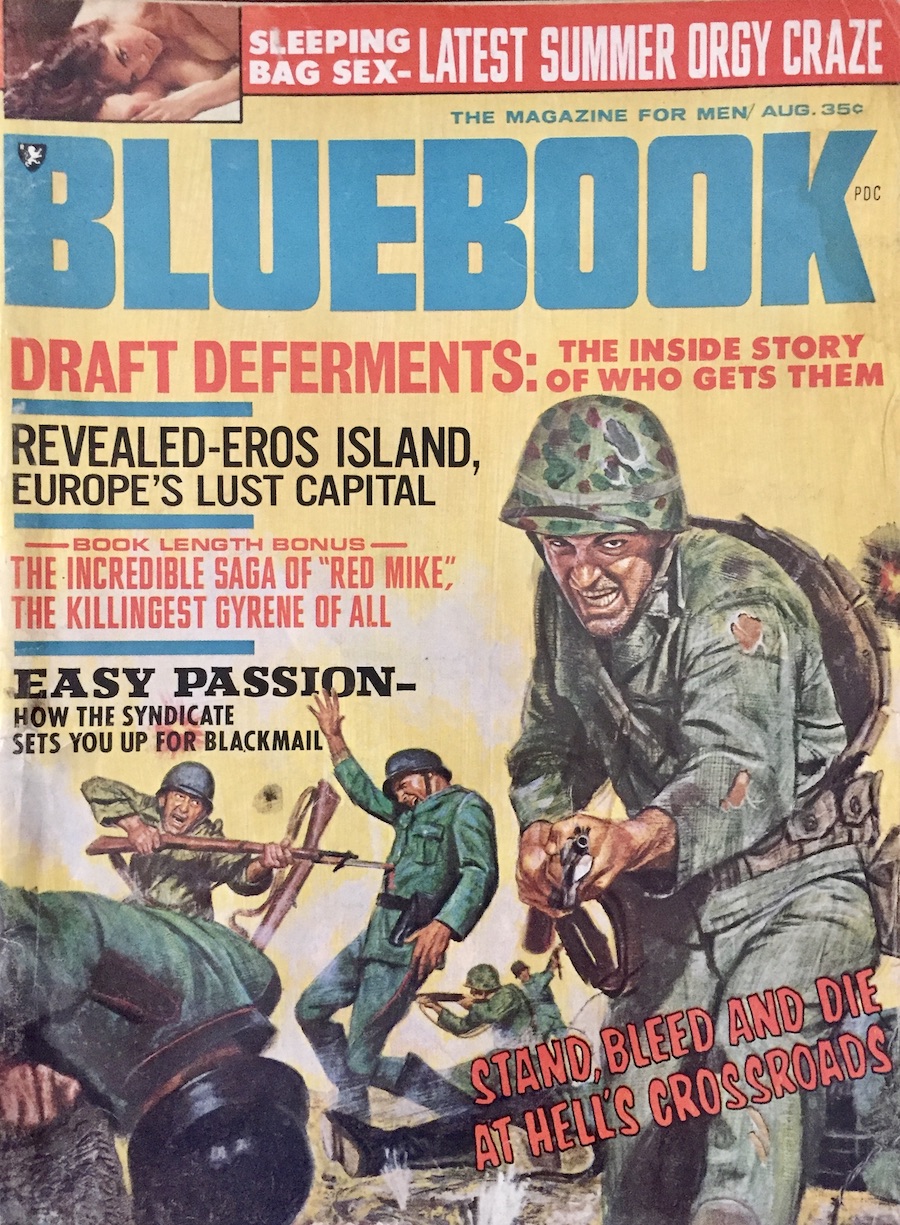 Such narratives outlasted the pulps themselves, which died out in the early 1970s. Stories glorifying war and sexual conquest seemed out of step with the cultural revolutions rippling through the United States in the immediate aftermath of a failed overseas war. Yet the macho pulp storylines retained their attraction enough to resurface only a few years later.

By the mid-1980s, “re-masculinized” men returned in full force. A finely chiseled Rambo deployed back to Vietnam to save American prisoners of war still held captive there. So too did Chuck Norris’s Colonel Braddock in the Missing in Action films. Even President Ronald Reagan took his cue from these tough-minded action heroes, quipping in 1985 that he would now “know what to do” if faced with a hostage crisis after watching Rambo: First Blood Part II. Would anyone call Rambo or Braddock a “pussy”?

The militarization of masculinity portrayed in the Stallone and Norris action movies had clear roots in the Cold War macho pulps. Nor should we be surprised by former Seal team O’Neill’s use of the term “pussy.” Because the veteran had achieved his manhood through military service, especially in an elite unit, he could be secure in demeaning others who didn’t meet his masculine ideals—which apparently also inoculated him from deadly viruses.

Yet it’s not only the militarization of the “P” word that resonates, but the politicization of it as well. When Senator Ted Cruz (R-Tx) recently claimed that “many liberal males never grow balls,” he was purposefully contrasting his own supposed conservative masculinity with the femininity of his political rivals, whether they be male or female. One wonders, though, if Cruz truly fashions himself as the new archetype for twenty-first-century manhood or simply hopes to score a few cheap political points via social media name-calling.

Or, conceivably, Cruz is channeling what has underscored a decades’ long anxiety over American masculinity: that “real men” are on the verge of extinction because of political correctness gone awry or a feminist movement subverting traditional gender norms or any other imagined threat that stokes fears among mostly white, young, angry men.

Perhaps the most revealing expression of these anxieties comes from right-wing, all-male groups like the Proud Boys who see themselves as “aggrieved, marginalized, and depressed.” These traditionalists extol the imagined superiority of western culture, believe they are being disenfranchised by the left, and have found in Trump’s America a “place to put [their] political resentment.” As if to demonstrate their masculinity, the Proud Boys, according to one critic, “like to spoil for a fight.” 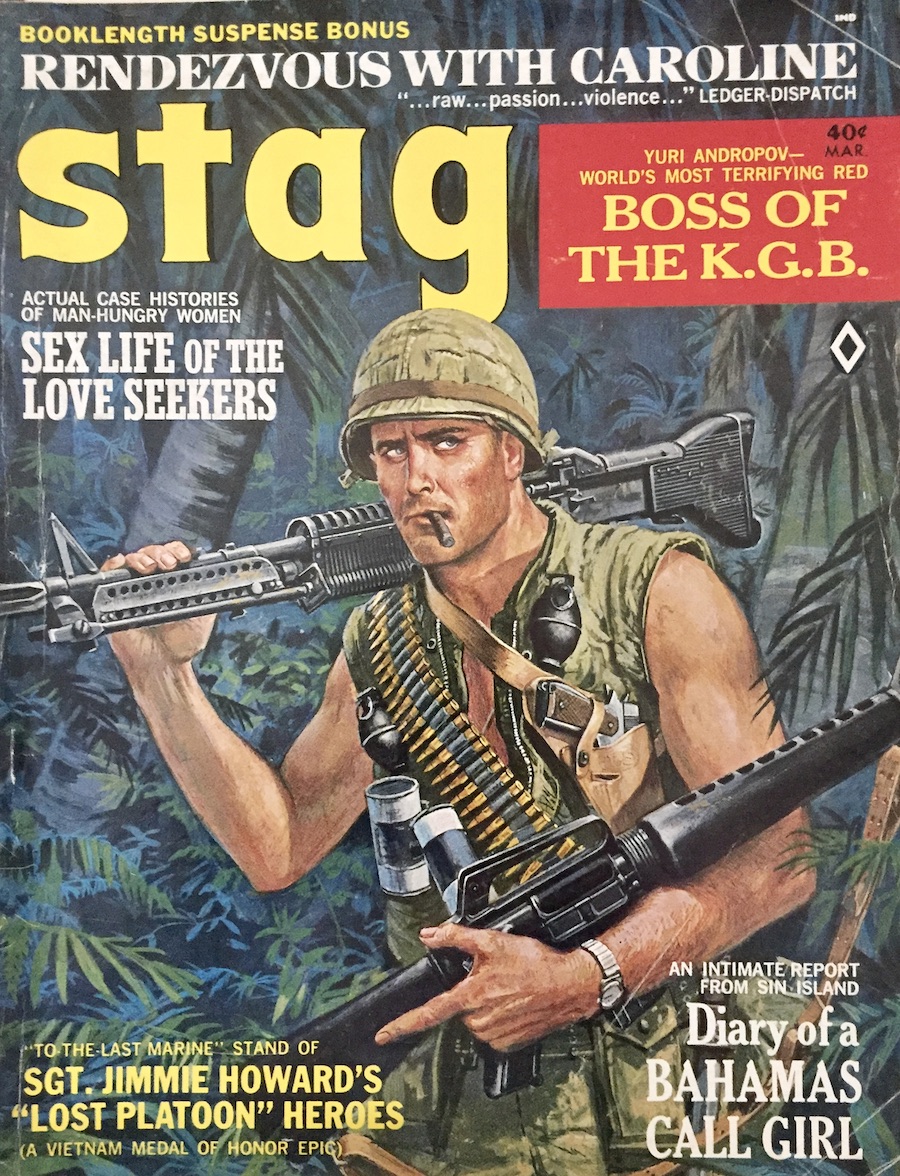 According to the “pussy” narrative, it’s not just the sensibilities of persecuted white men who are under attack, though, but the nation’s security as well. When I posted to social media a few covers from the macho pulps to promote my forthcoming book, one retired colonel who believes conservatives must win the current “culture war” replied that we all should focus more on crafting a militarized notion of masculinity “because a lot of Americans are pussies.” Another Twitter respondent claimed that the “pussification of America’s youth is a matter of national security. We need a touch of testosterone added to the water with fluoride,” he argued. “No more cavities and fewer softies.” By this logic, if only US soldiers and marines were equipped with more hormones, they might have achieved more lasting results in Iraq and Afghanistan.

So, what to make of this perceived “pussification” of America? Most importantly, we need to accept the fact that real violence stems from imagined grievances and misogynistic language. A congresswoman being verbally assaulted. A group of wrathful white men seeing themselves as a “right-wing fight club.” A militarization and polarization of society based on outdated gender norms.

For those who don’t want to examine the violence they perpetrate—against women or minorities or immigrants or any other perceived social or cultural threat—the “pussification” of America provides a warped justification for violent means.

Popular narratives of what it means to be a man, to paraphrase Josephine Livingstone, need not rest on connecting “the vulva with weakness” for those men who don’t act like chiseled Hollywood action heroes. In the Cold War men’s adventure magazines, “real men” were depicted as heroic warriors and sexual champions. More than a half century on, such depictions continue to resonate far too widely across American society. It seems well past time to evolve beyond mid-1950s mindsets and begin conversations about alternate models of masculinity. Chances are, America will survive, even if all men aren’t Rambo.