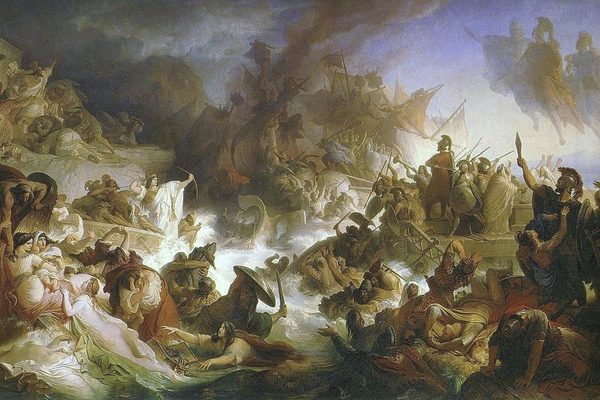 Twenty-five hundred years ago in the Battle of Salamis (dated to September, 480 BC), the ancient Greeks defeated the invading Persians and paved the way for Greece’s Golden Age of the 5th century, BCE, a foundation period for Western Civilization.

By the late 6th century BCE, the Persians had come to dominate numerous peoples and reigned as the superpower of the era. At its height, the Persian Empire consisted of twenty provinces and stretched from the Indus River in the east to northern Greece and Egypt in the west.

At this time ancient Greece, or Hellas as the Greeks called it, consisted of some 1500 city-states spread across the Greek mainland, the Aegean Sea islands to the east, and Sicily and southern Italy to the west. The most important and powerful of these were Sparta, a highly regimented city-state (polis) with a mixed political system and an invincible army, and Athens, a democratic polis with the largest population and navy in all of Hellas.

As the Persian Empire expanded westward into Asia Minor (current day Turkey), it came to dominate a number of Greek city-states on its western coast and on the islands in eastern Aegean Sea. In 499 BCE, this domination became intolerable to some city-states and they rebelled, calling on other Greeks for assistance. Athens responded and provided support. Though the revolt was suppressed, King Darius of Persia never forgave the Athenians for their audacity in challenging him. Legend has it that at dinner he ordered a slave to say three times: “Master, remember the Athenians.”

Persia had launched two earlier expeditions which did not bring success. The first in 492 BCE proved disastrous. The second in 490 BCE ended in the stunning victory for the Greeks, led by Athens, at the Battle of Marathon. (Our current day marathon is 26.2 miles because this was the distance that the messenger, Pheidippides, ran from the battle site of Marathon to Athens to announce the victory.)

In 480 BCE, Persia, now led by Xerxes, renewed its campaign with overwhelming force. The ancient historian Herodotus indicated that 300,000 Persian allied forces crossed the Hellespont into northern Greece and faced Greek forces perhaps one-third that size. In his play The Persians, the Greek playwright Aeschylus, who fought in the battle, indicated that the Greeks had 310 ships facing a Persian allied fleet of 1207 ships.

After defeating the Greeks, led by Leonidas and 300 valiant Spartans, at the Battle of Thermopylae, the Persian force marched south to Athens, now essentially evacuated, and sacked it. Most of the Athenians and other unconquered Greeks had withdrawn to the island of Salamis or manned the Greek fighting ships, the triremes.

While the Spartans argued for withdrawal and the defense of the Peloponnesian Peninsula, the Athenian leader Themistocles won the debate on the strategy. His plan for defeating the Persian navy was simple: Lure the large Persian navy northward into the narrow strait feigning withdrawal, neutralizing its superior numbers, and then attack.

To set the hook, he arranged for a slave, Sicinnus, to give the Persians false information: The Greeks were squabbling and were in disarray. They planned to withdraw the next day. Eager for victory, Xerxes took the bait.

On September 29, 480 BCE, the Persian fleet—its rowers already in action for 12 hours—advanced into the trap. In his play Aeschylus relates the action at dawn:

“…first there came from the Greeks the sound of cheerful singing, and the island rocks loudly echoed it. Fear struck all the Persians who had been disappointed in their hopes. For the Greeks were not singing their hymns like men running away, but like men confidently going into battle. The noise of the war-trumpet on their side inflamed them all.”

“It was possible too to hear shouting: ‘Sons of the Greeks, forward! Liberate your country, liberate your children, your wives and the temples of your gods, and the graves of your ancestors. The fight is for everything.’”

He also paints the picture of the utter defeat of the Persians.

“The sea was full of wreckage and blood. The beaches and the low rocks were covered in corpses. Every ship rowed in a disorderly rout, every one of the Persian fleet. … Wailing and shrieking covered the sea until dark night put an end to it. I could not finish telling you of the terrible happenings even if I were to relate them for ten days. Of the one thing you can be sure, never in one day did such a multitude of men die.”

Xerxes observed the action from the heights above the strait. Aeschylus envisioned his reaction to the disaster.

“Deep were the groans of Xerxes when he saw this havoc; for his seat, a lofty mound commanding the wide sea, o’erlooked his hosts. With rueful cries he rent his royal robes, and through his troops embattled on the shore gave the signal for retreat.”

Salamis has come down to us as a key event in the early history of Western Civilization. If the Greeks had succumbed and came under the Persian “barbarian” yoke, ancient Greece probably would not have experienced its Golden Age in the 5th century BCE, with all its achievements: scientific inquiry of the natural world free from religion, philosophy, architecture, sculpture, mathematics, organized athletic competition, the realization of the world’s first democracy and the enrichment of the idea of freedom.

Charles Freeman in his book, The Greek Achievement: The Foundation of the Western World, gives due adulation to the Greeks for the victory. However, he argues that it was the land Battle of Plataea, the succeeding year, which was more decisive. “It had dislodged the Persian forces from Greece and sent them home in humiliation and so, possibly, had changed the course of European history.” This is true; however, without the decisive naval battle of Salamis there would have been no decisive land battle of Plataea.

The Greeks today have been celebrating the anniversary of this battle to include the staging this summer of the play The Persians, at the remarkable ancient amphitheater at Epidauros, which I was lucky enough to visit fifteen years ago.

Independent journalist John Psaropoulos witnessed the play and noted that the audience erupted in applause when the Persian queen Atossa asked of the Greeks, “Who is their master and commander of their armies?” The chorus leader answered: “They call themselves nobody’s slaves, nor do they obey any man.”