Loyalty and Duty in the Federal Bureaucracy, From Nixon to Trump

Michael Koncewicz is the Michael Nash Research Scholar & Ewen Center Program Coordinator at the Tamiment Library & Robert F. Wagner Labor Archives at New York University. He previously worked for the National Archives at the Richard Nixon Presidential Library and Museum. His book They Said No to Nixon: Republicans Who Stood Up to the President's Abuses of Power is now available in paperback. 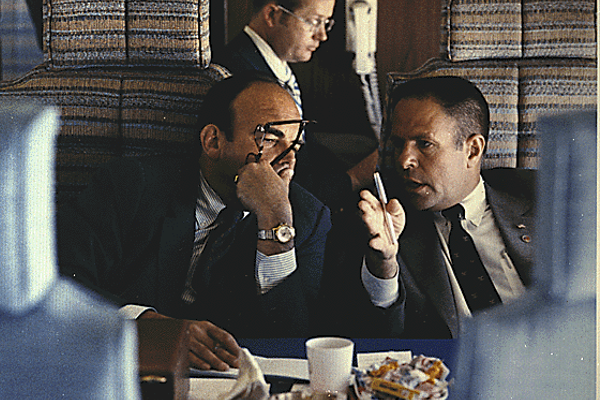 “There must be absolute loyalty,” said President Nixon during a meeting with his Chief of Staff H.R. Haldeman and Special Assistant Fred Malek, two months after his landslide victory over George McGovern. The White House’s repeated clashes with executive branch officials convinced Nixon that he needed to wrangle the federal bureaucracy during his second term. At one point, he even asked for the resignation of every cabinet member, a mostly symbolic gesture that was meant to send a message across the administration.  Nixon demanded that the bureaucracy would be at his disposal, particularly when it came to using the levers of government against his enemies. “There must be the ability that we speak out to this government; the damn government will start to pack,” exclaimed the president.[1]

While parallels between Nixon and Trump have received much attention, it is arguably more important to confront the fact that Trump has expanded on the process that Nixon was trying to build that winter. The White House has successfully carried out what Trump’s s former advisor Steve Bannon referred to as the “deconstruction of the administrative state,” instilling a culture of loyalty to the president that Nixon sought during his time in office. Whereas the civil servants featured in my book They Said No to Nixon were able to rein in Nixon’s power grab on a few crucial fronts, the current administration has successfully moved forward with institutionalizing rampant abuses of power across the government.

The American public has been flooded with stories that collectively show that there is a concerted effort to not only cut the federal bureaucracy but also turn much of it into the president’s political weapon. Trump’s push for more loyalty across his administration has not only led to more corruption, but has also enabled purposeful abuses of power that advance the president’s agenda. This campaign has had far-reaching consequences for government workers, leaving them with little power to provide any sort of check on the White House’s misdeeds. The Justice Department is just one example of an executive agency’s work being redefined over the last four years. As Attorney General, Bill Barr has been responsible for lies about the Mueller report and mail-in voting while also intervening in the Roger Stone case and sending out unmarked federal agents to terrorize Black Lives Matter protesters in American cities. A US Attorney for the District of Massachusetts wrote in a letter to the Boston Globe that William Barr has done the president’s bidding at every turn.” Secretary of Health and Human Services Alex Azar recently made it clear that the Food and Drug Administration (FDA) could no longer sign any new rules related to medical products, including any future coronavirus vaccines. Under the leadership of longtime Republican donor Louis DeJoy, the United States Post Office has seen, among other issues, significant slowdowns just months before an election that will likely see a record number of absentee ballots. Unfilled positions, unjust firings and budget cuts, combined with numerous abuses of power have blurred the lines between the White House and the administrative state at an unprecedented level in the modern era.

Unlike the Nixon administration, we have seen very little resistance from inside of the Trump administration. Even before Watergate became a national story, there were individuals who opposed some of the President’s more controversial policies, and also blocked his abuses of power. Republican appointees like Secretary of Treasury George Shultz and IRS Commissioner Johnnie Walters stopped the White House from taking over the IRS when they refused to audit hundreds of individuals who were on Nixon’s enemies list. Three Assistant Directors of the OMB, Kenneth Dam, William Morrill, and Paul O’Neill, prevented the President from cutting federal funds to MIT and other elite universities when they threatened to resign and take their story to the press. Most famously, Attorney General Elliot Richardson and his Deputy William Ruckleshaus resigned in protest when they were asked to fire the Watergate Special Prosecutor Archibald Cox, setting off the Saturday Night Massacre.  These substantive acts of resistance were linked to a much stronger culture of nonpartisan civil service that had defined much of the federal bureaucracy of the era.

Confronted with a political culture that was significantly different than 2020, Nixon felt pressured to appoint and keep independent-minded Republicans like Elliot Richardson and William Ruckelshaus who had butted heads with the White House behind the scenes. Richardson had promoted more liberal policies related to busing and childcare while he was the Secretary of Health, Education, and Welfare (HEW) from 1970 to 1973. As the first head of the newly created Environmental Protection Agency (EPA), Ruckelshaus had fought back against the White House’s attempts to weaken the agency. “I suppose you’ve got to keep one person in the goddamned government that’s considered to be, sort of interested in the people. You see he has that,” said Nixon during a meeting where he and his aides were mapping out his second term.1 The credibility that Richardson brought to the administration was ultimately why Nixon selected him to become Attorney General in May 1973. Richardson resigned from the post five months later. Nixon later wrote that appointing Richardson was “a major mistake” and that “Richardson’s weakness, which came to light during the Cox firing, should have been apparent.”[2]

It has become clear that President Trump has little incentive to appeal to what Nixon often referred to as the nation’s “establishment,” as the White House has created an atmosphere that has strongly discouraged any forms of dissent. The Trump impeachment hearings brought forth a few individuals who were willing to speak out again the president, but not at the cabinet-level. One of the more notable dissenters, Lt. Col. Alexander Vindman, a Ukraine expert who worked inside the National Security Council. Vindman was fired from his position last October and retired from the military in July, citing the President’s "campaign of bullying, intimidation, and retaliation.”

Numerous successful attacks on the more independent parts of the administrative state have left the public with far fewer opportunities to hold a President accountable for their abuses of power when compared to the Nixon-era. Republican administration officials stopped Nixon, but Donald Trump has come dangerously close to achieving Nixon’s authoritarian vision. No matter the outcome of the upcoming election, future attempts to rein in the executive branch will need to confront the fact that our present-day political culture has unfortunately left little room for nonpartisan civil servants.