Nostalgia and the Tragedy of Trump's Speech at Mount Rushmore

John Bodnar is Distinguished Professor Emeritus of History at Indiana University and author of Divided by Terror: Patriotism in Post- 9-11 America (University of North Carolina Press, 2021). 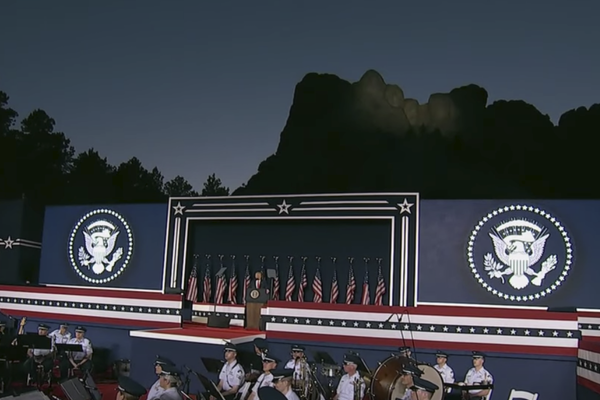 Standing in front of Mount Rushmore on July 3, Donald Trump offered the American people a recitation of their history that was not only stirring but saturated with nostalgia.  With visages of notable presidents looming behind him, he presented a magical tale of a wonderful nation pursuing its manifest destiny and the heroes who helped it along.  Magnificent achievements abounded; victims and aggression were nowhere to be found.  His oration perfectly underscored David Lowenthal's point that nostalgia is memory with the pain removed. The pain is in the present.

In Trump's sentimental and self-satisfying rendering of our past, Americans emerge as a people beyond reproach--free of any hint of original sin or culpability for sordid deeds.  He legitimately praised the laudable actions of America's doctors and nurses who fought the corona virus, the "wonderful veterans" who fought our wars and the law enforcers who patrol our streets.  He stood in awe of George Washington for persevering through the  bitter winter at Valley Forge, of Thomas Jefferson for authoring the Declaration of Independence, calling it "one of the greatest treasures of human history," and of Abraham Lincoln for saving the union and ending slavery.  He paid tribute to "our founders" for launching not only a revolution in government, but a revolution in the pursuit of "justice, liberty, and prosperity."  He even found space in his pantheon of heroes for Muhammad Ali, Buffalo Bill Cody,  Frederick Douglass, Andrew Jackson, General George Patton, and  Elvis Presley. Certainly there was much that Americans could be proud of in this particular history lesson but Trump's omissions were glaring. The ache of Indian removal, Jim Crow, lynchings, race riots, labor exploitation, Vietnam, Iraq,  sexual abuse, and environmental degradation were left out of this version of who we were.

Soon, however, Trump's wistful saga turned ominous.  The president declared that the future of the "most just and exceptional nation ever to exist on earth" was in peril, threatened by forces that emanated not from distant shores but from within.  He warned his listeners of dangers that jeopardized "every blessing our ancestors fought so hard for."  America was now threatened by  "angry mobs" who were attempting to deface "our most sacred memorials and unleash a wave of violent crime in our cities."  Entrenched in urban enclaves run by "liberal democrats," these hordes represented the vanguard of a "new far-left fascism" intolerant of contradictory views who were now spreading a form of totalitarianism in our schools and newsrooms and threatening to unravel the very revolution that gave birth to the nation in the first place.  In an age when Americans had come to fear Muslims from abroad, immigrants with criminal intent, and a deadly virus, Trump now insisted that the real existential threat to America and its glorious history came from domestic terrorists who opposed him politically and plotted to "defame our heroes, erase our values, and indoctrinate our children."

Trump's speech offered a classic case of what scholars such as Svetlana Boym have called "restorative nostalgia," a highly emotional impulse that longs to flee from the incessant swirl of change  and tension in the present and find truth and comfort in a romanticized past free of turmoil and trauma.  Such wistfulness is popular in our time because it promises to serve as a source of enduring truths--suspending the need for critical thinking--and free the virtuous nation from any responsibility to address wrongs it may have committed. In Trump's retelling of American history, in fact, there were no misdeeds.  He offered a memory and a history free of  guilt and certainly without any evidence that might support claims for justice in the present.

Boym also identified a contrasting form of nostalgia that she claimed was more "reflective." In this particular turn to the past, facts are prized more than myths and a careful assessment is made of what has worked and what has failed so that improvements or reforms can be made going forward. This more thoughtful nostalgia longs not for the return of paradise but the implementation of lessons learned from a history filled with forward and backward thrusts. It serves as an antidote the lure of utopia or an "unreflected nostalgia," which can breed "monsters" or evil forces like "angry mobs."  Senator Joseph McCarthy's warnings in 1950 that there were communists or "men in high places" lurking  in the government that threatened American values was a prime example of this turn to "monsters."  When "mobs" appear in the streets defenders of paradise can never see their grievances as legitimate because there can be no reason to critique what is already exceptional and faultless.  The only recourse is to quash the mob, drain the swamp, demand a restoration of law and order and reaffirm traditional values.  Negotiations would be waste of time.

Ironically, Abraham Lincoln, whose monument glared down at Trump as he spoke in South Dakota, turned out be a nostalgic as well, but one that relied more on a sober analysis of the past he longed for than a wistful one.  Drawing upon his experience from leading the nation through the Civil War, the sixteenth president yearned earlier times when America was peaceful and united.  As most historians will argue, Lincoln fought the war to save the union. But Lincoln, drawing upon his view of  history, saw the fight to save the United States as much more than a preservation project. He felt Americans had a debt to their forefathers to sustain not only the nation they created but what he called America's "first principles."  He shared the sense that the nation was exceptional but not because it produced heroic figures but because it was born with a moral obligation to promote and protect the ideal of universal liberty and equal rights for all.

Lincoln did not always believe as fully in these ideals as he might have. Before the Civil War he often felt the best solution to the race problem in America was for African-Americans to return to their home continent.  But over time--as he reflected upon the bitter disputes over slavery that had divided America before the 1860s and upon the human sacrifices of the war--he came to see clearly that the task before him--and for Americans who followed him--was to save the union so that it could continue to serve as a moral agent pressing for tolerance and equal rights for men and women everywhere. To Lincoln, America's destiny--shaped by its history--was less about producing heroes or quashing imagined conspiracies than ensuring that all Americans had access to their birthright of equality. That is why his famous speech at Gettysburg mentioned "our forefathers," the pain of solider deaths, and the continuing need to see that a government of the people should not perish from the face of the earth.

Trump's story of a flawless people and nation would not have resonated with Lincoln because it failed to emphasize the central tenet of the American experience that all human beings needed to be seen in the light of the dignity they possessed and the rights they deserved. Trump did praise Jefferson and the Declaration of Independence in his talk but then he buried them in a convoluted tale of heroes, destiny, statues,  mobs, and violent cities that left the impression that his need to destroy political opponents took precedence over everything else.  He showed no interest in endorsing Lincoln's point that the government and the nation needed to be saved so that it could continue the progressive dream of expanding human rights into the foreseeable future.  In Trump's future he planned to build a monument to all of America's heroes and ventured that centuries from now our legacy would be seen in the cities we built and the "champions we forged."  The tragedy of his nostalgia was not only that it failed to contemplate the calamities of the history he told but that his vision for the nation had drifted so far from the razor-sharp devotion Lincoln had to human rights.