Ben Railton is Professor of English Studies and Coordinator of American Studies at Fitchburg (MA) State University and President of the New England American Studies Association Council. His book Of Thee I Sing: The Contested History of American Patriotism will be published in January 2021. 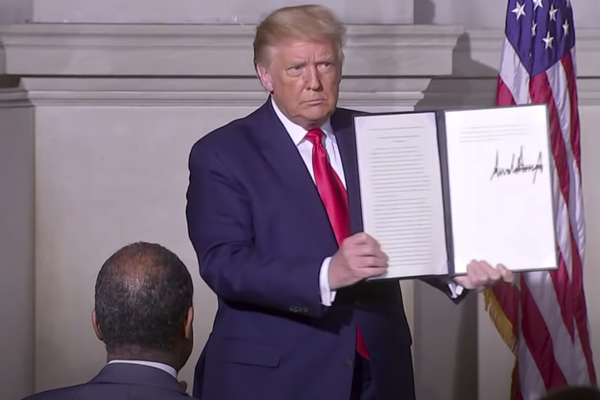 On Thursday, President Trump announced that he would be creating a “patriotic education” initiative called the “1776 Commission” that will develop a “pro-American curriculum” for the nation’s schools. Attacking the New York Times’ Pulitzer-winning 1619 Project and other anti-racist educational frameworks as “toxic propaganda,” a “crusade against American history,” and “a form of child abuse,” Trump claimed that “patriotic moms and dads are going to demand that their children are no longer fed hateful lies about this country.”

Trump’s remarks are part of an ongoing conservative response to the 1619 Project, one that has frequently emphasized 1776 instead—as, for example, did the Woodson Center’s 1776 Project, which creator Bob Woodson described as a “challenge to those who assert America is forever defined by past failures.” Woodson, Trump, and all those voices advocating for 1776 consistently frame their arguments as exemplary patriotism, and concurrently seek to categorize the views of the 1619 Project and its advocates as not just overly critical of America, but also as fundamentally unpatriotic.

In so doing, Trump and company are expressing a familiar combination of celebratory and mythic patriotisms, two of the four forms of patriotism I define in my forthcoming book Of Thee I Sing: The Contested History of American Patriotism (January 2021). That combination is in many ways our collective default, what we generally mean when we talk about patriotism. But if we recognize that there are other longstanding and equally valid forms and expressions, we can better understand both the contested history of American patriotism and the legacies of that battle in our 21st century moment.

The most familiar form of patriotism is what I call celebratory, the form embodied in shared communal rituals: the singing of the national anthem with hat in hand and hand on heart; the recitation of the Pledge of Allegiance by schoolchildren at the start of each day; the closing of speeches with “God bless the United States of America.” Out of such everyday rituals, as Michael Billig argues in his influential book Banal Nationalism (1995), a sense of national belonging and community is constructed. Those rituals and that community are at least potentially inclusive, able to be shared by all Americans.

But in practice, as we see today with Trump and company, American celebratory patriotism has often been wedded to a second and far more divisive form: exclusionary mythologizing (or mythic for short) patriotism. This form relies on mythic visions of both patriotism and the past in order to exclude a number of Americans, in two interconnected ways: excluding those voices that critique America’s flaws, since they are not sufficiently celebratory; and excluding those communities and stories that do not fit into the idealized narrative of history on which mythic patriotism depends.

The first exclusion is the more familiar element of mythic patriotism, captured in longstanding phrases like “love it or leave it” and in narratives that define criticism of the nation as fundamentally unpatriotic and anti-American. Such attitudes are exemplified by the 1918 Sedition Act, which made illegal “to willfully utter, print, write, or publish any disloyal, profane, scurrilous, or abusive language about the form of government of the United States ... or the flag of the United States.” In his recent call for Black Lives Matter protesters to be charged with sedition, Attorney General William Barr has overtly sought to return to this extreme version of mythic patriotism’s exclusions.

Mythic patriotism’s second form of exclusion, the exclusion of histories that do not sufficiently align with the celebratory vision, is just as divisive, as it focuses definitions of both patriotism and America on particular, mythologized communities. Whether the 1776 Project’s emphasis on Founding Fathers who embodied American ideals or the 1620 Project’s narrative of “the traditions of liberty” that all Americans have “inherited from Plymouth,” this mythic vision of American patriotism and identity both flattens the complexities of the histories on which it focuses and elides the stories of American communities such as enslaved African Americans during the Revolution and indigenous cultures in (and after) the era of European settlement.

In response to such exclusions I would highlight two other, equally foundational and longstanding forms of American patriotism that directly challenge those celebratory myths and offer alternative visions of our histories and identity. There’s active patriotism, a form which defines individual and collective actions like service, protest, and sacrifice, rather than passive participation in established rituals, as the space for expressions of patriotism. An active patriotic emphasis would highlight as exemplary American patriotic communities like the United States Colored Troops during the Civil War and the suffragist activists known as the Silent Sentinels who protested outside the White House for the two years before the ratification of the 19thAmendment.

Through their critique of the exclusion of women from the political process the Silent Sentinels also illustrated my fourth form of American patriotism: critical patriotism, which recognizes where and how the nation has fallen short of its ideals and seeks to push us closer to them. No single quote better captures this critical patriotic perspective than does James Baldwin’s from his essay collection Notes of a Native Son (1955): “I love America more than any other country in the world, and, exactly for this reason, I insist on the right to criticize her perpetually.”

Perhaps no historical moment captures critical patriotism more succinctly than does Francis Bellamy’s September 1892 creation of the Pledge of Allegiance. Bellamy, a Christian Socialist minister whose activism against inequality and racism led him to leave churches in both Boston and Florida, intended the Pledge to be aspirational, a pledge to work toward the nation’s ideals. As he later reflected on the Pledge’s concluding lines, “Just here arose the temptation of the historic slogan of the French Revolution which meant so much to Jefferson and his friends, ‘Liberty, equality, fraternity.’ No, that would be too fanciful, too many thousands of years off in realization. But we as a nation do stand square on the doctrine of liberty and justice for all.”

Our current moment features striking moments and examples of critical patriotism as well. There’s Colin Kaepernick, who said of his initial 2016 anthem protest, “when there’s significant change and I feel like that flag represents what it’s supposed to represent in this country, I’ll stand.” And there’s the 1619 Project, which highlights not just the horrors of slavery and racism, but also and especially the resistance and activism, the exemplary critical patriotism, of African Americans. As Nikole Hannah-Jones puts it in her introductory essay, “It is we who have been the perfecters of this democracy.”

The celebratory and mythic patriotism of Trump’s “patriotic education” proposal might seek to exclude the 1619 Project from our national and historical narratives. But in truth, this debate marks the latest stage in the contested history of American patriotism—a history that needs a far more prominent place in our collective memories and current conversations alike.