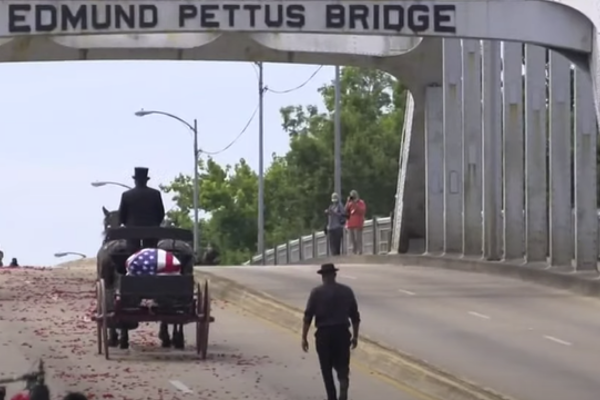 In 2012, Pulitzer Prize-winning biographer Jon Meacham, author of an upcoming book on civil rights icon John Lewis, wrote the essay “Keeping the Dream Alive.” In it, he mentioned James Truslow Adams’s The Epic of America popularizing the term “American Dream” in 1931, and Meacham refers to it as the “conviction that those who work hard and play by the rules will be rewarded with a more comfortable present and a stronger future for their children.”

Meacham recognizes that “dreams of God and of gold,” especially the latter, “made America possible.” He admits that for much of our history the American Dream was reserved for white people: “And so while white settlers built and dreamed, people of color [especially Native Americans, slaves, and their descendants] were subjugated and exploited by a rising nation that prided itself on the expansion of liberty.”

But to many Whites, including many immigrants, writings from “Benjamin Franklin's ‘The Way to Wealth’ aphorisms to Horatio Alger and the drama of the upwardly mobile” reflected the American Dream.

Writing in the presidential election year of 2012, Meacham lamented impediments to realizing the dream like economic inequality and unemployment, and stated that “the most basic requirement of the American Dream is a job.” Viewing the 2012 presidential campaign, he wrote that the winner (Obama or Romney) will be the one who convinces most voters he can further economic growth.

The “American dream of a better, richer, and happier life,” the appeal of the Horatio Alger myth, was a dream that many immigrants shared, and in the 2016 election some voters thought that Donald Trump epitomized such a dream. And in 2018, a British miniseries, “Trump: An American Dream,” was produced (it is now available on Netflix). According to a review, it shows “in every decade, Trump is the same as he ever was…. seemingly singularly obsessed with wealth, power, and self-promotion.”

Trump’s mother was a Scottish immigrant and his father the son of German immigrants. According to one biography of him, Donald’s paternal grandfather Friedrich, “like many before him, was lured by tales of gold strikes and other riches to be found in the West.” After a while in Seattle, Friedrich joined the “Klondike gold rush in the Yukon,” where he and a partner operated a food and lodging establishment that “respectable women” found “repugnant” because of such going-ons as prostitution.

Like Friedrich, his son Fred (Donald’s father) was a “go-getter” in the style of Horatio Alger’s fictional heroes. He made a fortune in the real estate business in and around New York City. In 1985 he won the Horatio Alger Award, whose web site indicated that he built “one of the most substantial real estate empires in the United States.” In 1973, however, the Justice Department charged Fred, Donald, and Trump Management with “refusing to rent and negotiate rentals with blacks, requiring different rental terms and conditions because of race, and misrepresenting that apartments were not available.”

True, Donald was not the “self-made man” of the Alger myth, but his dad was. And Fred, as the American Dream proclaimed, was among the parents who provided a “stronger future for their children.” Moreover, by becoming a flashy billionaire and a celebrity (star of the TV hit “The Apprentice,” which advertised his glitzy lifestyle), Donald became a vulgar symbol of a materialistic American Dream--by 2007, astronaut Buzz Aldrin feared the dream had “morphed into the pursuit of money.”

But a nobler American Dream continued to breathe. It was alluded to by abolitionist Frederick Douglass, spelled out by Martin Luther King, Jr., and most recently carried forward by one of his followers, Congressman John Lewis.

In a Boston speech of 1869, Douglass insisted that “our greatness and grandeur will be found in the faithful application of the principle of perfect civil equality to the people of all races and of all creeds, and to men of no creeds.” He advocated a “composite nation.” Historian Jill Lepore calls the concept “a strikingly original and generative idea, about a citizenry made better, and stronger, not in spite of its many elements, but because of them.”

Like King and Lewis after him, Douglass’s Christian beliefs were "vital to understanding who he was, how he thought, and what he did.” But he also believed that “we should welcome all men of every shade of religious opinion, as among the best means of checking the arrogance and intolerance which are the almost inevitable concomitants of general conformity. Religious liberty always flourishes best amid the clash and competition of rival religious creeds.”

Almost a century later, in 1963, Martin Luther King gave his famous “I Have a Dream” speech at Washington D. C.’s Lincoln Memorial. In it he said “I still have a dream. It is a dream deeply rooted in the American dream.”

But in a July 4, 1965 sermon, “The American Dream,” at the Ebenezer Baptist Church in Atlanta, King more fully detailed his vision of the dream. He began by quoting from the Declaration of Independence: “We hold these truths to be self-evident, that all men are created equal, that they are endowed by God, Creator, with certain inalienable Rights, that among these are Life, Liberty, and the pursuit of Happiness.”

Like Douglass, he spoke of religious tolerance and inclusiveness: he noted the “amazing universalism” of the phrase “all men,” which includes “humanists and agnostics,” as well as non-Christian believers. (Later on in his sermon, King commented favorably on the non-Christian Gandhi’s teachings, which applied Jesus-like love to social interactions.)

King went on to speak of God endowing us with “inalienable rights” and intending “us to live together as brothers and to respect the dignity and worth of every man.”

Like Meacham later, he noted that “on the one hand we have proudly professed the great principles of democracy, but on the other hand we have sadly practiced the very opposite of those principles,” for example in regard to Native Americans and Black people.

But MLK thought it was “marvelous and great” that our Founding Fathers left us with a dream “to forever challenge us; to forever give us a sense of urgency; to forever stand in the midst of…. our terrible injustices; to remind us of the ‘oughtness’ of our noble capacity for justice and love and brotherhood.”

Elaborating on the last point, he added that “in seeking to make the dream a reality we must use and adopt a proper method. I’m more convinced than ever before that nonviolence is the way…. Oh yes, love is the way. Love is the only absolute.”

Near the end of his sermon, he once again used the repeating cadences he had used so effectively two years earlier in his “I Have a Dream Speech.” Only this time the repeated phrase was “I still have a dream,” followed by words such as “that one day all of God’s children will have food and clothing and material well-being for their bodies, culture and education for their minds, and freedom for their spirits.”

In emphasizing that people can’t take from you the “right to pursue Happiness,” King perceived that happiness was more important than two of Trump’s favorites, money and fame (when my kids were young I can remember buying them a game called “Careers,” because it allowed players, unlike “Monopoly,” to pursue happiness rather than money or fame).

After King’s assassination in 1968, some of his followers continued his mission of trying to make the American Dream come true. One of them was John Lewis, who was elected to the House of Representatives in 1986. While working with King, he had been beaten on occasion and arrested at least 40 times. Shortly after his death in July 2020, an essay appeared entitled “John Lewis Was The Embodiment of the American Dream.” Its author wrote, “Few men have ever been born into such discrimination and deprivation only to overcome it and reshape a country they loved even though it treated them unfairly.”

In an essay, “Together, You Can Redeem the Soul of Our Nation,” which appeared on the same day he was eulogized by three presidents at the same Ebenezer Baptist Church where MLK had delivered that 1965 sermon, Lewis wrote that “each generation must do its part to help build what we called the Beloved Community.”

In that same essay he urged his readers to “study and learn the lessons of history; to “continue to build union between movements stretching across the globe because we must put away our willingness to profit from the exploitation of others,” and to “demonstrate that the way of peace, the way of love and nonviolence is the more excellent way.” And he ended with the words, “So I say to you, walk with the wind, brothers and sisters, and let the spirit of peace and the power of everlasting love be your guide.”

Already in 2011, Congressman Lewis had put out a press release celebrating the “4th of July and the Power of the American Dream.” Like Douglass in 1869, Lewis stated that “the American dream is more than living large. The American dream is the power to create one out of many and the goodness that flows from the unity of all human kind.”

Compared to King and Lewis’s comprehensive and moral vision of the American Dream, Trump’s Make-America-Great-Again perversion of it, seems pale indeed.

The two civil rights leaders envision a society that offers not hate, but love (a  “Beloved Community” of "exuberant gladness”). Not divisiveness, but inclusiveness. Not just “material well-being” for its people, as important as that is, but also, in King’s words, “culture and education for their minds, and freedom for their spirits.” Not a “thing-oriented society,” where “machines and computers, profit motives and property rights, are considered more important than people,” but a “person-oriented society.” And not a society that takes “our air, waters and land for granted” and displays “a simple lack of respect for nature and our environment” ( à la Trump), but one that realizes as Lewis did that “humanity is the most important endangered species under threat from climate change.”

Joe Biden is not Martin Luther King or John Lewis, yet he values their version of the American Dream: a “Beloved Community” based on love for all humans and nature and valuing inclusiveness, culture, education, and freedom. And Biden shudders at Donald Trump’s vapid and divisive perversion of our Dream. In November, Americans will have a choice which dream to pursue.