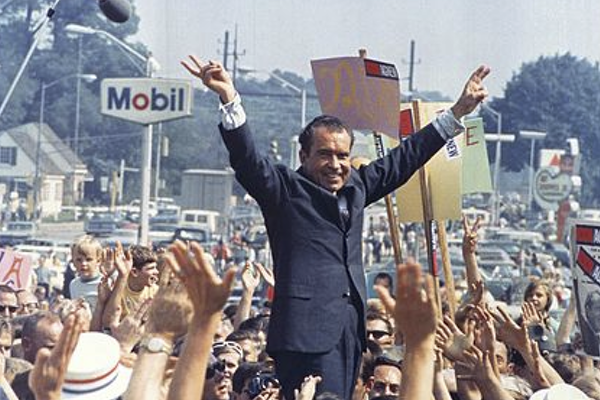 The year 1968 was one of the darkest in the nation’s history. With the public deeply divided over the toll of the Vietnam War (35,000 combat deaths by year’s end), the country was plunged into mourning after the murders of Dr. Martin Luther King and Robert F. Kennedy.  When violent protests erupted in dozens of cities after Dr. King’s death, the Republican presidential candidate, Richard Nixon, vowed to use “law and order” to restore “traditional American” values.

Nixon’s appeal to a conservative white electorate worked. After winning a narrow victory over Hubert Humphrey (George Wallace got 13% of the vote), Nixon began a rollback of many of the Kennedy-Johnson civil rights and anti-poverty programs.

In 2020, the nation is once lost in fear and mourning, this time over 140,000 deaths from an epidemic and the shocking death of George Floyd. As widespread protests (generally peaceful) continued in many cities over racial injustice, the Republican president has drawn from Richard Nixon’s strategy. Vowing to impose “law and order,” he has attacked protestors as criminals and called for a return to “traditional” values.

Will Trump be able to repeat Nixon’s success?

The short answer is no.

Here are four reasons why the nation’s political and social climate in 2020 is much different than in 1968.

1. Demographics. Both the overall population and the electorate have changed dramatically from 1968. Fifty years ago, the nation was 85% white and the governing class almost entirely white. In 1968 Congress has only six Black officials (five congressmen, one senator), none from the South.

In 2020, the Congressional Black Caucus has 55 members. Many of the nation’s largest cities including Chicago, Detroit, Baltimore and San Francisco have Black mayors.

Today the “Non-Hispanic White” group comprises barely 60% of the country's population. People of color (nonwhites and Hispanics) now comprise a majority of those under age 16. The nation is, in effect, “browning” from the bottom up.

Numerous studies have found a strong correlation between higher education and liberal political views. One can debate the causes (e.g. liberal professors) but the outcome is clear; better educated voters support issues such as affirmative action, abortion rights, gun control and increased funding for social programs.

3. Awareness of racial injustice. In 1968, whites had a very limited understanding of how Black people lived and the pervasive discrimination they endured. The nation’s schools, housing and workplaces were largely segregated. Black people, who were still referred to as “Negroes” in many newspapers, were invisible in popular white culture. For example, the first network TV show to feature a Black family, Sanford and Son (about a junk dealer in Watts), did not appear until 1972.

Ignorance breed intolerance. In 1966, when Dr. King led a protest march through an all-white suburb in western Chicago he was met with a hail of rocks and bottles.

I was a senior at an all-white high school in California in 1968. In our U.S. History class, the civil rights movement was ignored. The institution of slavery was dismissed in a few paragraphs in our textbook; it was simply “abolished” by Lincoln at the end of the Civil War. No mention was made of Jefferson and Washington owning slaves or the slaveholding states’ role in shaping the Constitution.  The next year, when I began college and attended classes with Black students for the first time, I experienced culture shock. They wanted to talk about discrimination in jobs, housing and education. I literally did not understand what they were talking about.

4. The Vietnam War. Today, some 45 years after the war ended, it is difficult to comprehend how completely the conflict dominated public discourse. In 1968, we had 540,000 troops fighting in Vietnam and any man over the age of 18 and not in college was likely to be drafted. Today, the entire (all-volunteer) U.S. Army strength is less than 480,000.

During each week of 1968, some 250 American soldiers were killed. Images of besieged Army bases and wounded G.I.s filled the network news every night.

The Vietnam War was the number one issue in the 1968 election. Nixon’s position was one big lie. He promised an “honorable” end to the war, but refused to say how he would achieve it. It took Kissinger and Nixon five more years to negotiate a peace, which was basically a surrender. The cost: 15,000 more dead Americans.

Today we are still engaged in several foreign wars, but the Pentagon has learned how to maintain a low profile by restricting information and limiting access to the news media. Foreign wars are just not an issue this election.

In a recent editorial in the Los Angeles Times, Kareem Abdul-Jabbar (who was in his third year at UCLA in 1968) wrote:

“The moral universe doesn’t bend toward justice unless pressure is applied. In my seventh decade of hope, I am once again optimistic that we may be able to collectively apply that pressure, not just to fulfill the revolutionary promises of the U.S. Constitution, but because we want to live and thrive.”

Trump’s attempt to use Nixon’s outdated playbook will fail. Our nation is younger, more diverse and better educated now.