Who Was Our Worst President? Think About it When a Grim 75th Anniversary Arrives

Paul W. Lovinger is a San Francisco journalist and author. The founder of the War and Law League, he may be reached through http://www.warandlaw.org. 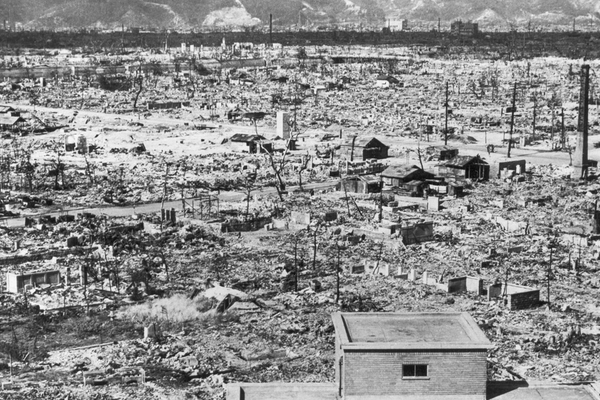 Runners up are James Buchanan and George W. Bush, neither matching Trump’s “record of bringing on or aggravating three devastating crises at the same time....”

I see Donald and George W. tied for second place. Bush let 9/11 occur, then used it to excuse aggression in Afghanistan and (oil-producing) Iraq. He also instituted the torture of prisoners.

Professor Wilentz’s argument against Trump could be stronger, adding foreign offenses. My points:

More surprises may pop up before November 3. In 2011 and 2012, Trump repeatedly predicted that President Obama would attack Iran to help his reelection. So if dwindling poll numbers make Trump desperate, he may try what he projected onto Obama: a new war.

Right now, however, here is my candidate for the title of “America’s Worst President.”

He gave them hell

Truman was a Missouri haberdasher who became a judge, a senator, and briefly vice-president before succeeding President Franklin D. Roosevelt on April 12, 1945.

A local talk-show host recently called Truman “one of our greatest presidents.” I place Truman at rock bottom.

He is praised for leading a Senate committee that investigated waste and overcharges in military production, for banning military racial segregation, and for helping post-war European economies through the Marshall Plan. But the enormity and lasting effects of his misdeeds hugely outweigh any good deeds.

First of all, Truman introduced the world to nuclear terror.

On August 6, 1945, he condemned as many as 180,000 children, women, and men of the city of Hiroshima to agonizing deaths. In so doing, he ignored The Hague Convention’s bans on sneak attacks, bombarding of defenseless communities, and arms causing unnecessary suffering,

Imagine. A bomb releasing many times the sun’s heat, ejecting people and buildings miles high into a mushroom cloud. A woman with a baby—converted to charcoal. Skin falling from people’s bodies. Viewers of the explosion—their eyes melting. Winds of 500 miles an hour sucking people from buildings. Glass shards flying at 100 miles an hour—serving as guillotines (From Dr. Helen Caldicott).

Truman announced a military and scientific triumph: “A short time ago, an American airplane dropped one bomb on Hiroshima and destroyed its usefulness to the enemy.... We have now added a new and revolutionary increase in destructiveness.... We have spent $2 billion on the greatest scientific gamble in history and won.” He

Truman had no qualms about playing “Almighty God,” which he often invoked. He slept well. Pleased with his handiwork, on August 9 he similarly attacked Nagasaki. There he smote dead as many as 100,000 more civilians.

Why did he do it?

The popular belief—which Truman and staff helped to spread—was that the bombings saved myriad American lives by ending the war quickly. This implies that Japanese lives did not matter. They mattered none to the man from Missouri, who harbored racist attitudes toward those he called “Japs,” “Chinamen,” and “niggers.”

Actually, the Japanese government tried to surrender before the bombing. Truman knew it, proved by his diary entry for July 18, 1945, relating a talk with Prime Minister Churchill: “Stalin had told P.M. of telegram from Jap Emperor asking for peace.”

In any case, did the new devices have to be demonstrated on people—twice? To one who regarded Japanese as subhuman, the answer seemed to be yes. Differences in the “Little Boy” and “Fat Man” bombs suggest that humans served as guinea pigs in testing the effects of new weapons.

The advance of the Soviet Red Army, which had belatedly joined the fight against Japan, doubtless concerned Truman. The bombs would show the Russians and the world who was boss.

Remember too, the Truman Committee’s chairman had exposed waste in military production. His attitude toward the costly atomic bombs might be expressed in this question (attributed to Donald Trump): ”If we have them, why don’t we use them?”

War annihilating all human life has repeatedly threatened. Yet after 75 years, our supposed democracy still entrusts doomsday weapons to one man, no matter how stupid, impulsive, ignorant, or hateful he may be.

Should any president have that much power?

Truman made the president the initiator of war.

Until he ordered forces to Korea without authorization by Congress, nobody in American government had ever argued that a president could lawfully start a war. Writings of the nation’s founders show their intention to reserve that authority to Congress.

Expecting the incursion into the South by North Koreans on June 25, 1950, Truman was anxious to fight them. The Soviet delegation being absent (protesting Red China’s non-seating), on the 27th he got four permanent members of the UN Security Council to rubber-stamp his decision.

The United Nations Charter had been signed on June 26, 1945, in San Francisco, pledging to end “the scourge of war.”  It required all five permanent members to agree on any action.

Truman’s war—masquerading as a United Nations “police action— began on June 30, 1950. It ended in stalemate and armistice under President Eisenhower on July 27, 1953, six months after Truman left office.

The war took nearly five million lives. More than half were civilians, mostly northern victims of saturation bombings. Destruction of cities and towns with napalm flouted international law. “This is moral degeneracy,” journalist I. F. Stone wrote. Even General MacArthur regretted the cruelty.

War crimes included official massacres of civilians. A North Korean accusation of biological warfare was roundly denied by Washington but likely based on fact. The war almost went nuclear.

Every president thereafter has imitated Truman by waging war, overtly or covertly, without the prior congressional approval that the Constitution requires. Millions more have died in those illegal wars in Vietnam Cambodia, Laos, Panama, Iraq, Yugoslavia, Afghanistan, Pakistan, Libya, Somalia, Syria, Yemen, and elsewhere.