"The Day I Start Being Free": Detained Migrants Struggle for Human Rights

Jana K. Lipman is Associate Professor of History at Tulane University. She is author of Guantánamo: A Working-Class History between Empire and Revolution and the cotranslator of Ship of Fate: Memoir of a Vietnamese Repatriate. Her most recent book is In Camps: Vietnamese Refugees, Asylum Seekers, and Repatriates. 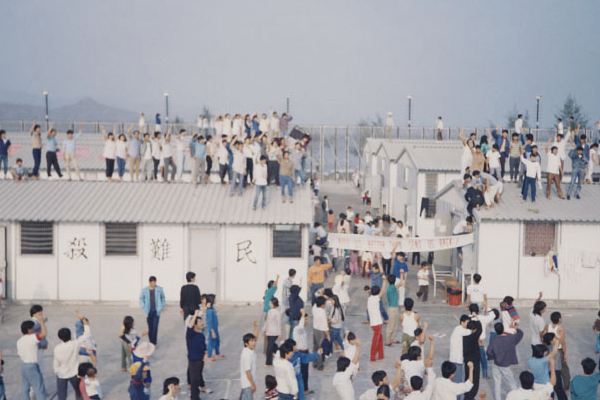 In 1994, a Vietnamese man in a Hong Kong detention center spoke in extreme terms. He had escaped Vietnam, and he insisted that he was a refugee, a person “with a well-founded fear of persecution.” Despite his claims, Hong Kong rejected his bid and planned to repatriate him back to Vietnam.  He responded by launching a hunger strike: “I am not afraid of death and I [am ready] to die for freedom.”  He feared that if he died, Hong Kong immigration officials would cover it up, and his protest would disappear from the historical record.

More than twenty-five years later, his story still resonates, and hundreds of people claiming asylum are now protesting behind bars in the United States.

I live in Louisiana, where there is a network of immigration detention centers, most often in rural parishes far from lawyers and community resources. There, too, dozens of desperate individuals have resorted to hunger strikes. In one instance, five South Asian men who feared religious and political persecution in India engaged in a months-long hunger strike in Jena, LA.  They wanted nothing more than to be released and pursue their asylum claims outside of jail – a practice that had previously been common in the United States. As one proclaimed, “The day I will start eating and drinking is the day I start being free.”

These stories of detention and protest are at the heart of my recent book, In Camps: Vietnamese Refugees, Asylum Seekers, and Repatriates. Most Americans think that Vietnamese entered the country fairly seamlessly. They were anti-communist allies, and popular accounts emphasize the 1975 evacuation and U.S. resettlement. However, this was only the first so-called “wave.” Tens of thousands more left Vietnam in the years after the war, and sought asylum in host sites, such as Hong Kong, Malaysia, and the Philippines.  After 1989, only a small proportion of these “boat people” managed to resettle in the United States. Those who failed their individual “screening” faced repatriation, often under duress.

Given that modern U.S. refugee policy was a response to the exodus of Southeast Asians who arrived in the late 1970s, it is worth returning to that history. It was far more complicated and divisive than generally acknowledged, and it has implications for international refugee policy and U.S. detention practices today.

It’s true that the United States felt a sense of responsibility toward its Vietnamese allies. In 1975, it admitted over 120,000 Vietnamese. In 1980, Congress passed the Refugee Act, and the U.S. accepted approximately 230,000 Vietnamese “boat people” who fled in the late 1970s and early 1980s. However, Vietnamese continued to leave the country, and nearby Malaysia and Hong Kong were often overwhelmed by their needs.  These hosts agreed to offer first asylum to Vietnamese, but only if a third country, usually the United States, Canada, or Australia, agreed to then resettle them.

In the 1980s, the United States became more selective. INS officers visited Southeast Asian camps, and they privileged Vietnamese for resettlement who were from southern Vietnam and who had direct ties to the U.S. military. The U.S. generally did not admit Vietnamese from northern Vietnam or those without prior ties to the United States. The result was a “long stayer” problem, where Vietnamese would be stuck in camps, but without a resettlement placement. This became particularly acute in Hong Kong, especially after more than 18,000 Vietnamese arrived in the territory in 1988.

At this point, Hong Kong decided to take things into its own hands.  It wanted to close the camps and curtail the number of Vietnamese coming.  To do so, it decided it would begin a screening process.  Rather than accepting all Vietnamese as refugees, it would interview Vietnamese individually.  Those who could prove they faced political persecution would be “screened in” and granted resettlement in a third country. But if Hong Kong officials believed an individual fled to escape poverty and gain a better life in the west, they would be “screened out” and repatriated back to Vietnam. This was a dramatic change.

At first, the United Nations High Commissioner for Refugees (UNHCR) and the United States opposed this plan, but both eventually came around and endorsed Hong Kong’s new policy. Many U.S. politicians opposed the repatriations, arguing that it was wrong to send Vietnamese back to a communist country.  However, Hong Kong officials argued that the U.S. was acting in a hypocritical way; the U.S. could not oppose repatriations if it also rejected Vietnamese for resettlement.

The result was the 1989 Comprehensive Plan of Action, which brought together Vietnam, resettlement countries, first-asylum countries and territories (like Hong Kong, Malaysia, and the Philippines), and donor countries. The agreement made screening and potential repatriation for Vietnamese standard policy. Vietnamese would no longer be de facto refugees.

However, Vietnamese in the camps resisted.  They insisted they were still refugees and should not be repatriated.

Vietnamese used collective protest and even violence to demonstrate control over their physical selves and gain attention from allies and the media. Hunger strikes were regular occurrences within the camps Vietnamese declared, “We are victims of the [sic] Hong Kong’s screening.” Other Vietnamese resorted to self-mutilation and suicide attempts. In January 1990, just weeks after the first forced repatriations in Hong Kong, two men held in a detention center learned that their appeals had been rejected. Their response was swift and violent. They “stabbed themselves in the stomach . . . in an attempt to disembowel themselves” with homemade knives. Like prisoners worldwide, the Vietnamese used their own bodies in protest, forcing the Hong Kong officials and the UNHCR to confront their claims to refugee status and opposition to repatriation.

In April 1994, the stress, volatility, and potential for violence hit a peak. With the quickening pace of repatriations, a group of 1,500 Vietnamese organized a protest, which included public hunger strikes and collective actions. Many wore all white and mourning headbands. In the end, there was a dramatic confrontation, between Hong Kong security officers and the Vietnamese. Hong Kong officers fired dozens of cartridges of mace and tear gas, particularly targeting the Vietnamese who had climbed onto the rooftops of the camp barracks. Vietnamese shouted, “Protest against forced repatriation! Protest against the violation of human rights! The people of Hong Kong, please help the boat people!”

Ultimately, human rights advocates and lawyers succeeded in winning asylum for numerous Vietnamese, but the majority faced repatriation. Hong Kong and other Southeast Asian countries repatriated more than 90,000 Vietnamese. The UNHCR argued that not everyone leaving Vietnam could be categorized as a refugee more than 15 years after the war had ended.

Looking back on the 1990s in Hong Kong upends how most Americans understand Vietnamese migration to the United States. The story did not end when helicopters left in April 1975.  While Vietnamese had a far better chance of resettling in the United States than most nationalities, this changed in the late 1980s and 1990s.  After that point, Vietnamese faced asylum hearings and detention, often in harsh jail-like compounds in Hong Kong, Malaysia, and Indonesia.  In this way, these screenings, often with limited legal support and an asylum system with a high rejection rate, looked far more like the contemporary U.S. asylum system.  In fact, when U.S. politicians criticized Hong Kong’s detention and repatriation policies, Hong Kong commentators often pointed to the U.S.-Mexican border and the U.S. policy against Haitians.

Likewise, Vietnamese in the camps were not passive.  They protested in all ways possible – through legal campaigns, diasporic networks, and with their bodies.  They wanted to show that they were refugees and wanted to be released at all costs.

Today’s asylum seekers in the United States are often in even worse positions than the Vietnamese asylum seekers in the 1990s.  They are even further from legal counsel, and unlike in Hong Kong, there is relatively little media coverage about their protests and campaigns. Also, Vietnam had the incentive of renewing diplomatic relations with the United States in the 1990s to dissuade it from persecuting returnees.  Today’s asylum seekers from Central America are at far greater risk, and human rights organizations have documented that hundreds have been killed or faced physical violence on return.

COVID-19 also poses yet another threat to asylum seekers in the United States. So, like Vietnamese and other asylum seekers before them, migrants held in detention are again turning to hunger strikes and protests to draw attention to their condition.

In Louisiana, Georgia, California, and more, asylum seekers behind bars in the United States have gone on hunger strikes . In words that might resonate with the Vietnamese in Hong Kong, a group of women in detention in Jena, LA protested the dire conditions they faced during the COVID-19 pandemic: “Don't let us die like this, as if we were animals. We're human beings."