In the “Bramble” of Central Park, a Showdown Over Nature and Race

Douglas C. Sackman is Professor of History at the University of Puget Sound (WA), and the editor of A Companion to American Environmental History (Wiley-Blackwell). 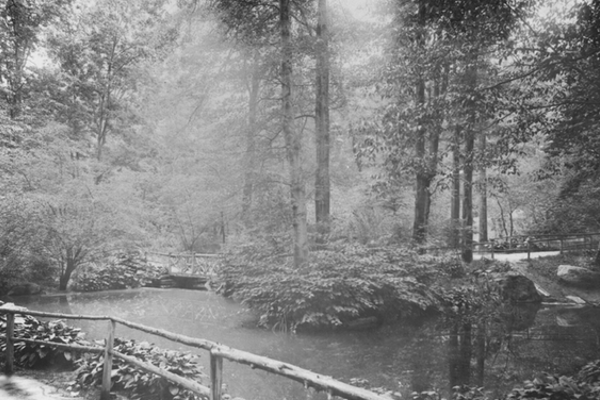 On a precious piece of the national landscape loaded with history, the birder and the dog walker faced off at twenty paces or so. With hands on their trusty pieces—one recording the scene to provide witness, one calling out for police back up—the two Coopers found themselves acting out a script that was centuries in the making. Their flashpoint lights up the story of how nature and race have been constructed in America, giving privileged access to some while turning others into eternal trespassers.

The ground of their meeting was literally constructed: to meet the vision of Frederick Law Olmsted, in the 1850s workers hauled in 2.5 million cubic yards of stone and earth, adding in another 40,000 cubic yards of manure and compost before planting 270,000 trees and shrubs. To make way for what became Central Park, African Americans living in Seneca Village were unceremoniously evicted, and their gardens buried—as Roy Rosenzweig and Elizabeth Blackmar document in The Park and the People. For Olmsted, these people, their homes, and their relationship to nature didn’t matter: he wanted to a create a Romantic countryside in the city, to provide solace, rejuvenation and spiritual cleansing to an urbanizing America through accessible retreats to “pure” nature. Though Olmsted earlier had publicized the horrors of slavery in the South, his Park was built on removal of African Americans whom he did not explicitly welcome back to his re-creation. Instead, it was generally represented as a place of natural healing and social mixing for white people only.

In parallel with the removal of African Americans in Seneca Village, Native Americans were forcibly removed from their homelands to construct National Parks at Yellowstone, Yosemite and Mount Rainier (to name a few). Promoters portrayed these places as pristine, untouched by people and therefore virgin wilderness, and patted themselves on the back for setting these places aside as spiritual playgrounds for Americans who were getting out of touch with nature. The people who had been in touch with nature in these places—for thousands of years—were expelled to make way for the fantasyland. As scholar Dina Gilio-Whitaker, a citizen of the Colville Confederated Tribes, points out, “When environmentalists laud ‘America’s best idea’ and reiterate narratives about pristine national park environments, they are participating in the erasure of Indigenous peoples, thus replicating colonial patterns of white supremacy and settler privilege.”

First emptied, national and urban nature parks alike were recreated as ersatz Edens and white spaces. Theodore Roosevelt thought wilderness parks would be great places for white males—softening in urban America—to restore and reinvigorate their manliness. Many environmentalists in the early 20th century were eugenicists like Madison Grant—author of virulently racist tract The Passing of the Great Race (1916) and a patron of the American Museum of Natural History, where the colonialist statue of fellow traveler Roosevelt was just slated for removal.  Out of one side of his mouth Grant could decry the destruction of California redwood trees and out of the other declare that “the laws of nature require the obliteration of the unfit.” As Alexandra Stern explains in Eugenic Nation, for him “Saving the Redwoods meant more than just protecting a tree: it was a metaphor for preventing race suicide and defending the survival of white America.” Nature interpretation programs at National Parks were pioneered by Charles Goethe, a Sacramento eugenicist who would later be read and admired by Nazis. Later environmentalists—such as white nationalist Garret Hardin who wrote the influential essay “The Tragedy of the Commons”—blamed environmental destruction on the needs of a growing population, especially of people of color.  By contrast, many environmentalists, employing a circular logic of self-gratification, portrayed whites as the chosen people who could save themselves and become saviors themselves by revering and protecting nature. America’s environmentalism has a legacy of exclusion that is more a feature than a bug.

Protecting “nature” has never been just about nature in America; it has also been a story about people, and deep-seated prejudice has colored the portrayal. America’s “good nature” was affiliated with cleanliness and whiteness, and contrasted with “bad nature”—dirtiness, a quality associated with the city, and also, relentlessly and malevolently in media of all sorts from the antebellum period to the present, with African Americans. The pure spaces of “good nature” have generally placed people of color in permanent exile, classifying them as defilers of the constructed nature’s purity or simply excluding them from pretty pictures of it.  As Carolyn Finney found in Black Faces, White Spaces: Reimagining the Relationship of African Americans to the Great Outdoors, the media have helped construct a “white wilderness.” A review of a ten-year period (1992-2001) of Outside Magazine showed that of 4602 images that included people only 103 were of African Americans; almost all of them were of black males running or playing basketball in an urban setting.

African Americans, who had first been enslaved to wring profit from nature for the benefit of others, were in effect cut off from America’s celebrated landscapes. African Americans who connect with nature are often regarded as interlopers who are out of place. To enter “nature” was to cross a boundary of imagination, no less real than Jim Crow lines. As with all such boundary crossers, they have been perceived as agents of danger because they upset established and enforced order.

African Americans know from experience just how enforced that order is, often by the police working hand in glove with white civilian enablers and lookouts.  “Barbeque Beckys” are vigilant in every park and at every turn, ready to call in innocuous behavior framed as dangerous because it is being done by Black people. They create a powerful and pervasive force field, which keeps African Americans from being able to ramble freely in the streets or in the parks. To move about without harassment, Black people routinely, as Garnett Cadogan discloses in his essay “Walking while Black,” perform innocence and reassurance, acting out a “pantomime...to avoid the choreography of criminality.” Even so, like other people of color in America, he finds that he cannot wholly avoid having his movement arrested and his body taken into custody.

Pervasive racist representations have primed white people to look on black people outside with fear. D.W. Griffith’s “landmark” film Birth of a Nation (1915) pictured a lustful white man in blackface pursuing a white woman through the woods and up a mountain: rather than be defiled, she hurls herself off the cliff. This was cinematic ground zero for the trumped up fear that black men—anywhere, but especially in woods or brambles—are a threat to the “purity” of white women and nature alike. The film’s weaponized fear detonates again and again. It set off the rebirth of the Ku Klux Klan and countless hate crimes and lynchings, which to this day, as LaToya Brackett powerfully reminds us, have been turned and turned again into terroristic spectacle and entertainment.

Christian Cooper explained that Amy Cooper, when she called the cops on “an African American man threatening my life,” in effect “pulled the pin on the race grenade and tried to lob it at me....to tap into a deep, deep dark vein of racism...that runs through this country and has for centuries.” She didn’t have to reach far for the weapon, for the memory of the white woman jogger who had been raped in 1989 in another wooded area of Central Park lies near the surface. Five African American and Latino youths were blamed, framed and locked up. Despite their official exoneration 13 years after the fact, the pull of the racist imagery is so powerful that the highest elected official in our land, refusing to accept their innocence, still sees them as inherently guilty for having taken a walk in the Park while a white woman ran.

Since being called out for their legacy and continued practices of exclusion, environmental organizations and publications have worked to make amends—including various chapters of the Audubon Society. Still, as J. Drew Lanham has noted, African American birders are still few and far between. In his list of “9 Rules for the Black Birdwatcher,” rule number 1 is “Be prepared to be confused with the other black birder. Yes, there are only two of you at the bird festival....Yes, you will be called by his name at least half a dozen times by supposedly observant people who can distinguish gull molts in a blizzard.” After Ahmaud Arbery was killed for the crime of running while Black, Lanham added additional “revelations” to the list: “Roadrunners don’t get gunned down for jogging through neighborhoods, do they?” and “Hooded warblers are lucky. They can wear hoodies and no one asks questions or feels threatened. Vigilante ’Mericans don’t mobilize to make citizen’s arrest if they loiter in a strange shrub for too long.”

At great personal peril because of the structures that would deny him unfettered access to the environment, Christian Cooper has also ignored the “keep out of nature” signs to pursue his deep love of birds in Central Park’s Ramble. When his sister Melody at first referred to this place as “the Bramble” in her viral tweet, she evoked a deeper history of African Americans claiming American nature as their own rightful ground. In African American folklore, trickster Br’er Rabbit, when caught by Br’er Fox’s tar baby trap, has to think fast, using reverse psychology on the creature who would be his master: he pleads, “whatever you do, Br’er Fox, do not put me in the briar patch, the bramble. It’s the worst place for me.” So Br’er Fox throws him in, and Br’er Rabbit scrambles free. Until white Americans like Amy Cooper stop putting out tar baby traps, and recognize that everyone has a right to the Ramble, this nation will not be free of the racism inscribed in its cherished landscapes.