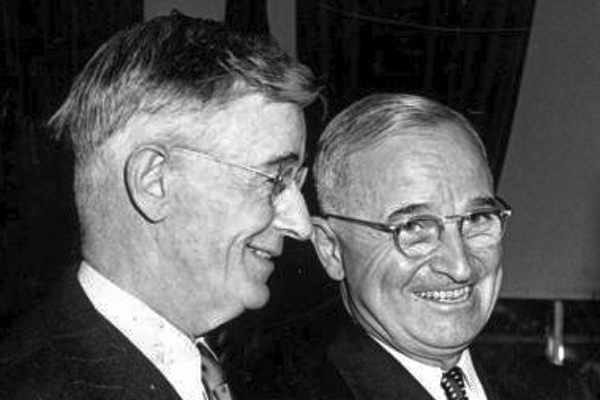 Present-day contempt for scientific expertise takes us back, some eight decades ago, to the Second World War.

The recipient of a joint doctorate in engineering from Harvard and MIT, Bush’s bona fides were exhaustive:  professor of electrical engineering at MIT, and later dean of engineering and eventually vice-president.  Bush is credited with developing the analog computer, among  numerous other milestones that prepared the path for our present-day digital age.

Bush proposed to President Roosevelt the harnessing of national defense requirements to nation’s scientific expertise, intending to draw from university research centers as well as private enterprise.  The immediate result was President Roosevelt’s Executive Order 8807 in June of 1941, authorizing formation of the Office of Scientific Research and Development.   Instantly the president designated Bush as the executive officer of OSRD, with ready access to the White House.

Simultaneously Bush, again at the request of the president, served on a top-secret committee focused on the development of the atomic bomb.  In so doing he routinely interacted with General George C. Marshall (Army Chief of Staff), James Conant (president of Harvard University), and J. Robert Oppenheimer  (director of the Los Alamos Laboratory in New Mexico, where much of the classified research and development occurred.)

Bush filled the ranks of OSRD with the nation’s foremost scientists, mathematicians, engineers, and physicians in common cause.  He also engaged large numbers of experts drawn from private-sector enterprises such as Bell Labs, RCA, and Sperry Gyroscope, to name only a handful.

One further aspect regarding Vannevar Bush merits airing.  During the 1930s he disdained President Roosevelt’s New Deal domestic legislation, regarding it as encroaching on private enterprise (his partisan affiliation, if any, remains unclear). This prompted him to advise the president, in course of devising OSRD, that the agency should disband once the war concluded.  That would occur in 1947.

Notably, given the exigencies of global conflict, President Roosevelt's trust in Bush was not unique. He appointed two prominent Republicans to his wartime cabinet.  Henry L. Stimson previously had served as Secretary of War to President William Howard Taft as well as Secretary of State to President Herbert Hoover.  Frank Knox became Secretary of the Navy.  Not only was Knox the Republican vice-presidential nominee in 1936 but he also composed a steady stream of editorials for his newspaper vilifying President Roosevelt’s domestic legislation.  Add to this, the president designated Wendell Willkie, his Republican opponent in the election of 1940, to serve as his ambassador-without-portfolio to promote the Allied cause during the course of the war.  As well, the president cultivated Senator Arthur H. Vandenberg, a Republican from Michigan, who would abandon his longstanding isolationist sensibilities to endorse an American role in establishing the United Nations.

Composing the foreword to OSRD’s official administrative history, published in 1948, Vannevar Bush cited what he regarded as its summative achievement:  “New lessons in  understanding and evaluation had to be learned by both the military and by the scientific community.”

The postwar legacy of Vannevar Bush would culminate in 1950, when President Harry S Truman signed legislation authorizing formation of the National Science Foundation.  Bush believed the new agency –drawing upon the wartime role of OSRD  – would advance nation’s scientific and technological research.  In all of this he looked askance, in the era of the of Cold War, at the out-sized influence of the nation’s uniformed services in devising national science policy.