Trump and the Puritans

Martyn Whittock's latest book, Trump and the Puritans (co-written with James Roberts, available June 2) traces the influence of US evangelicals to the seventeenth-century settlement of New England and examines its surprising legacy in the modern evangelical support for Donald Trump. He taught history for thirty-five years and has acted as an historical consultant to the British National Trust organization, the BBC and English Heritage. He is a Licensed Lay Minister, in the Church of England. 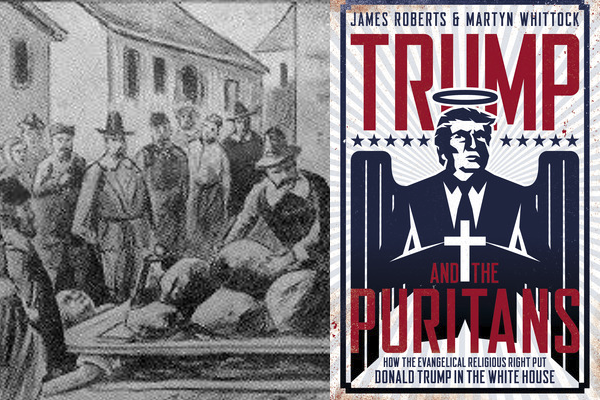 Whatever one feels about it, the ‘Trump phenomenon’ is often described as the US version of a populist trend that has impacted on many areas of contemporary global politics.  However, despite the global political similarities, Donald Trump’s success is also rooted in a peculiarly American experience, since a very large and influential part of his support base lies among Christians of the so-called ‘evangelical right’.

The presidential inauguration, in 2017, featured six religious leaders, more than any other inauguration in history.  Since then many evangelical leaders have (controversially) claimed that God has placed Trump in the White House, despite his character flaws, because he is the man who will get God’s work done at this – in their  view – critical point in US and world history. As a result, the influence of evangelical Christians on American politics has never been more pronounced. From the appointment of Supreme Court judges to US relations with Israel, from support for ‘The Wall’ to abortion legislation, the power of this extraordinary lobby is seen in the changing politics and policies of the nation. A veritable culture war appears to be occurring over the future direction of the USA; a battle for the ‘soul of America’.

In this, religious faith has an impact which is unique to the USA among twenty-first-century ‘Western’ states; and it stands comparison with the impact of Islam in other countries. There is clearly something distinctive about US culture and politics that sets it apart from comparatively developed democratic societies and states. In 2014 an extensive programme of research revealed that 70.6 per cent of Americans identified as Christians of some form. And, of the total adult US population, 25.4 per cent identified as ‘evangelicals’. About eighty-one per cent of them voted for Trump in 2016. This evangelical Christian base remains solid, even after three turbulent and controversial years. Recent evidence reveals that between May 2019 and March 2020, the number of weekly-church-attending white Protestants who believe that President Trump is anointed by God increased from 29.6 per cent to 49.5 per cent. And, while some are beginning to wonder whether Trump as the ‘chaos candidate’ (who thrives in situations of uncertainty and turbulence), may have finally met his match in the ‘chaos event’ (the Covid19 pandemic), there is evidence that his support remains solid among his base, many of whom are evangelical Christians.

This raises the question of why the USA is so different from otherwise comparable modern states. The evidence indicates that the answer ultimately lies in the seventeenth-century Puritan experience. This is not to claim one causal factor, nor is it to trace a simple trajectory from ‘then’ to ‘now’. Rather, it is to recognise that this – for all the undoubted complexity since – set America on a distinct course which is still being seen in key aspects of modern culture, identity and politics. It is a major factor which helps explain why the USA is as it is.

Remarkably, 2020 is not only the year of the next US presidential election, it is also the 400th Anniversary of the arrival of the Mayflower ‘Pilgrims’ in North America and the beginnings of Puritan New England. And both the election and anniversary occur in the same month: November. There is, undeniably, an historic link between the origins of Puritan settlement of North America (particularly that in Massachusetts Bay from 1630 onwards) and the remarkable events which have shaken the nation since 2016.  What is going on in the modern USA has very deep roots. They are roots that stretch back into the, almost mythological, origins of the nation in the seventeenth century. Modern events are part of a very deep story and this ‘Puritan connection’ helps explain a unique feature of modern US society: the influence of conservative evangelicals.

Co-writing Trump and the Puritans emphasised the extraordinary differences in the Puritan legacy either side of the Atlantic. In the UK, the restoration of the British monarchy in 1660 cast Puritans into the political wilderness. It was not until the nineteenth century that their descendants (termed ‘dissenters’ and ‘non-conformists’) were finally fully readmitted into the UK’s political system.  In contrast, while the British crown reined in the theocrats of New England in the 1680s and 1690s, Puritans and their descendants remained political players, ‘insiders’. Consequently, their legacy (even when diluted and adapted) continued to be potent as it connected later American colonists with their foundational roots – even when it was highly mythologised. The Mayflower Compact and the later covenanting agreements of the Puritan congregations of Massachusetts Bay contributed a profound sense of ‘calling’, a commitment to active formation of communities, and moral self-confidence to a venture which saw itself as an exceptional people, an ‘American Israel’. This was later adapted, manipulated and developed by those who came after. These concepts fed into the Declaration of Independence and the US Constitution, along with Enlightenment ideas. This was accompanied by a providential outlook which from early on considered the colonists as having been granted title to the land. This ‘American Israel’ was culturally and psychologically armed to dominate the original inhabitants of this ‘American Canaan’. These ideas of American exceptionalism and divine calling became secularised in nineteenth-century claims regarding Manifest Destiny and the subjugation of native peoples.

Despite huge changes since the seventeenth century, this has had a profound input into the US cultural DNA and still informs much of the outlook of many people concerning what it means to be an American. This may be explicitly referenced in events such as Thanksgiving or implicitly found in a confident sense of American exceptionalism and being ‘a city on a hill’ to inspire others.

While Trump is no Puritan, his appeal to evangelicals has seventeenth-century roots. It draws on a deep story of American exceptionalism, providential calling, elimination of the ‘alien other’, distrust of foreign states, the jeremiad against current sinfulness, and an apocalyptic confidence of being the fulfilment of history and gate-keeper to the fulfilment of biblical prophecy. We might call these ‘foundational phenomena’ and they reverberate with Puritan resonances. ‘America First’ and ‘Make America Great Again’ may be twenty-first-century slogans but they appeal to something very deep within the US psyche and cultural mythology. Furthermore, ‘Make America Great Again’ looks backwards as well as forwards.

In addition, among many modern evangelicals there has occurred a revitalising of the theocratic and providential aspects inherent in many of the original concepts. Consequently, though a secular state, the USA contains millions of voters who harbour theocratic ambitions that would have been readily understood in seventeenth-century New England.Even Trump’s behaviour during the Covid19 pandemic can still resonate positively with some core voters who are inclined to pit faith against science, and who also have a deep distrust of federal influence.

As a result, the current manifestations of these ‘foundational phenomena’ can be traced back through a very American style of imperialism and nationalism, to Manifest Destiny and frontier expansion, which has its ultimate roots in the seventeenth-century drive to create a New Jerusalem in the New World.  Much cultural water has passed under the bridge since the seventeenth century, and many tributaries have flowed into and diluted that primordial Puritan stream. Despite this, that original current has, arguably, played a greater role in forming a sense of American exceptionalism – both in terms of political culture and religious identity – than any other single causal factor. From the 1620 Mayflower landing and the 1630 Winthrop Fleet to the 2016 election of Donald Trump, from the 1692 Salem Witch Hunts to the divided USA of today, the Puritans have left a unique and complex legacy that helps explain the role of the evangelical right in modern US politics and, ultimately, the phenomenon that we know as the Trump presidency. That Puritan-derived influence and energy is far from exhausted. Whether consciously recognised and referenced, or not, seventeenth-century Puritan history has not finished with the USA.