We Had a Better Social Safety Net. Then We Busted Unions.

Lane Windham is author of Knocking on Labor's Door: Union Organizing and the Roots of a New Economic Divide. She is the Associate Director of Georgetown University's Kalmanovitz Initiative for Labor and the Working Poor, and co-director of WILL Empower (Women Innovating Labor Leadership.) 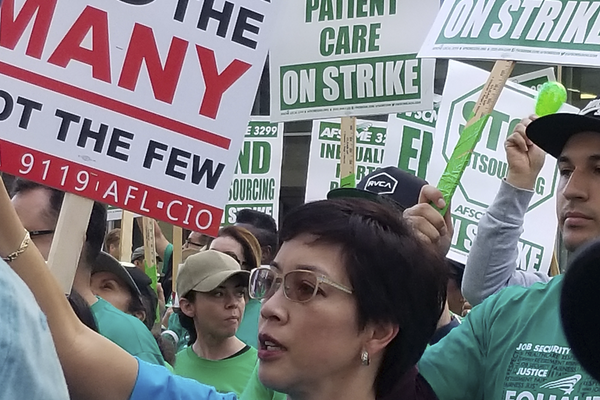 COVID-19 has taught us all just how frayed our social safety net has become, and how its holes make us all more vulnerable.  Up to 35 million may lose access to employer-provided health care before this crisis is over.  Our retirement security depends on markets that twist like roller coasters.  We are all at risk when some of us don't have paid sick days and must work with scratchy throats because rent is due. We've learned that people of color are far more likely to die from COVID-19 because racial inequities are baked into the system.

We used to have a better social safety net.  Many people in the U.S. long had government-supported health care, guaranteed pensions, sick days, and even supplemental unemployment insurance. The federal government undergirded these benefits by ensuring people's right to form a labor union. Those wage earners who joined a union—or who got a job with a company that matched the higher pay and benefits offered by its unionized competitors—effectively won a more robust social safety net through government-sanctioned collective bargaining. In fact, the U.S. has long relied on unions to do the kind of economic redistribution work that is shouldered by governments in other nations.

The collectively bargained social safety net didn't benefit everyone equally. Too often, its protections were limited to the white men most likely to hold unionized, industrial jobs. Women and people of color were often left out, because they were far more likely to hold the types of jobs—like in domestic work or agriculture—that were not covered by labor law and collective bargaining.  Nevertheless, for a time, union contracts were the closest thing the U.S. had to the kinds of robust social safety nets found in European countries.

Collective bargaining—negotiations over wages, benefits and working conditions—may seem to be a private affair between a labor union and an employer.  It's not. The government's role is central. Employers don't bargain collectively out of good will. They do so because they are required by the 1935 National Labor Relations Act to negotiate with employees who vote for a union.

Unions became a lynchpin to a robust social welfare system during World War II. They built on what they had won at the bargaining table, and began to accept employer-provided benefits in lieu of wage increases, which were restricted by the National War Labor Board.  After the war, it was not clear whether the country would increase or decrease the government's role in the safety net. Many unions demanded a more robust state presence and pushed (unsuccessfully) for universal health coverage, full employment legislation that would guarantee all workers a job, and even legislation that would link wages to prices. When they lost these legislative battles, the United Mine Workers of America (UMW), the United Auto Workers (UAW), and other unions began to push for employer-provided health care and retirement plans in labor contracts. Workers and employers struggled over the developing employer-provided social safety net.  In the early 1950s, up to three-quarters of strikes were over health and welfare issues.

At first, these gains were limited to union members, but over the ensuing decades the benefits spread. Collective bargaining enabled unions to set higher wage and benefits standards for much of the industrial economy, because employers routinely followed the lead of the unionized industrial giants. A mere 16 percent of all workers had regular medical coverage in 1950, but nearly 70 percent did twenty-five years later.

Workers began to lose this union-provided social safety net in the 1970s, when employers began to bust unions at a new level. During that decade, charges of unfair labor practices by employers doubled. When employers violated the rules, penalties were weak to nonexistent.  Employers have shrewdly continued to up their resistance over the decades. They routinely fire, harass and threaten workers who organize, and U.S. labor law is too weak to stop them. Amazon, for instance, recently fired warehouse worker Chris Smalls for organizing co-workers to protest unsafe working conditions in the face of COVID-19.  Such dismissals of labor activists are shockingly common. In fact, a 2000 Human Rights Watch report declared that U.S. workers have effectively lost the freedom to form a union.

Today, just over 10 percent of America's workers are covered by a union contract, including a mere six percent of private-sector workers.  Union members remain more likely to have good health care, guaranteed pensions, and higher wages than those who aren't part of unions. Working people still want unions; half say they'd form a union tomorrow if given the chance. Yet because employers have free rein to limit workers' ability to join and form unions, far too few working people can ever access what effectively serves as our nation's strongest social safety net.

Though it's difficult to imagine while we are still in the depths of the crisis, in the months and years after COVID-19 we will begin to rebuild our economy. Guaranteed health care, sick days, secure retirement, paid parental leave, affordable housing and fair wages can all be part of our new economic reality, but only if we actively construct a new framework that balances people's needs with those of corporations.  We will have some choices to make.  We could stick with the employer-provided model; then we would need to dramatically strengthen workers' access to collective bargaining and curb employers' rampant violations of workers' rights. We could also require employers to provide better social welfare to all workers. In the "gig" era when employment is increasingly precarious, however, we may decide that employer-provided social welfare is a 20thcentury relic. We may instead build universal social welfare, independent of employers.  In any case, we need to think big. During the Great Depression, our country made consequential economic changes that only a few years before had seemed impossible, including requiring employers to bargain with unions.  Today, we face a crisis that may in the end dwarf even the Great Depression, and our solutions must be innovative and bold. We can take this chance to ensure that we never leave ourselves, our children and our communities this vulnerable again. If we don't do it now, then when?